Labs Have Muses, Too!

“The process of doing science is like creating art!” I finally exclaimed, growing increasingly impatient.

I am, by force of habit, careful to provide conceptual bridges between the common, rather technocratic perception of what I do for a living and the reality of being a research scientist — a molecular biologist to be precise. But not this time. My friends — most of them artists, and all of them mildly intoxicated by that point in the evening — had looked utterly confused by my initial, ritually evasive description of my job. I simply stated the truth to these kindred souls. I thought they, unlike other laymen, ought to understand.

I should clarify that I am not using the term “layman” in a derogatory way, implying some de facto intellectual barrier separating the scientist from everyone else. The inhabitants of ivory towers, despite the false stories about Albert Einstein’s outsized brain, are not proof of cerebral hyperplasia. They do not suffer from a rare condition selectively affecting only those who have a Ph.D. (Einstein’s perfectly normal-sized brain, by the way, is still on display at the National Museum of Health and Medicine.)

If you ask me what differentiates science from other professions, I will first think of my six years of graduate school and even more years in the laboratory and I might believe for a moment that the answer to that question is “knowledge.” But the truth is that all these years of academic endeavor have served only to train me in the art of biology – just like aspiring artists of the Renaissance used to undertake lengthy apprenticeships.

A recent exhibition on Michelangelo at the Metropolitan Museum of Art serves to illuminate this point: the museum showcased dozens of skillful representations of hands, faces, contorted torsos and celestial beings, drawn repeatedly —almost obsessively— by various named and unnamed pupils in the Master’s shop. Each apprentice’s sketches were randomly thrown on the same piece of handmade paper (the making of which was also a task undertaken by younger apprentices of less experience or skill), in preparation for the final masterpiece. Is this process that different from the hordes of scientists-in-training populating laboratories across the world, who are perfecting the rigor of the Professor’s scientific discovery, sharpening their recently molded skills along the way?

And if you are one of those who believe that there is no room for art where learning is needed, I will remind you that literature necessitates years of learning merely to make sense of the scribbles on the page, not to mention the scholarship required to appreciate it. But to follow on my previous analogy, whether the trained scientist will become a Michelangelo or remain an apprentice lost to history depends on something else apart from hard work: inspiration.

Many of you may be surprised when I tell you that inspiration is important for science, as you probably consider it the exclusive privilege of the arts.  Ancient Greeks, however, believed that the source of inspiration was the same for both artists and scientists: the nine muses. Later, during a period when arts and sciences blossomed together, the Renaissance man incorporated the artist and the scientist in one archetypal figure.

But instead of answering the question of what it means to be a scientist, let me provide you with a description. Imagine it is late in the evening and you are the last person in the lab, perfecting a method for the detection of a specific molecule. Don’t worry if you don’t know any molecule to imagine, because all you need to understand is that the “results” are a monochromatic picture of parallel, ordered lines, thicker and thinner ones. A pattern not unlike the pattern you see on a wall hit by the rusty afternoon light, after it has been distorted by the window’s half-closed shades. Finally, after many weeks of improvements, unsuccessful trials and crushed hopes, all the universe seems to conspire to help you out, and you have in hand the data, a beautifully developed image of perfectly arranged lines. And as expectation builds, you must stare a few more minutes at the rust-colored striations, subconsciously employing all the knowledge that you managed to absorb during your lengthy training, before you can decipher the code of these patterns. 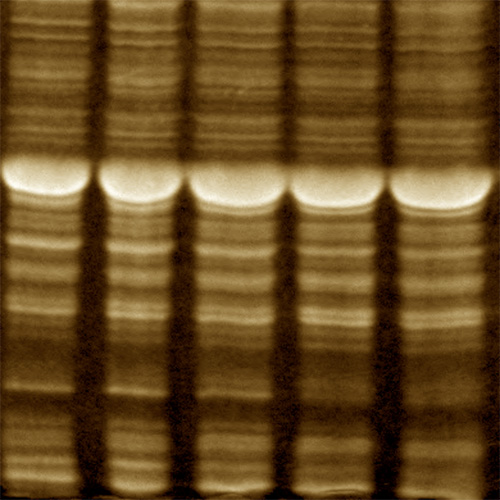 Then, in a moment of sudden revelation, it makes sense, and out of thin air you have the answer. The ancient muses have finally paid you a long-overdue visit. And as soon as surprise gives way to some rare seconds of tranquility, raw pulses of joy start traveling through your every nerve. But don’t be so hasty to assume that the electrifying sensation passing through your body is simply euphoria from a job well done. The feeling of that moment is best described as the deep gratification of welcoming a new friend.

I saw a momentary sparkle in the eyes of my friends at the bar, who finally started to understand.

Niki Athanasiadou pursued a Ph.D. in Molecular Biology because she was curious about how the building blocks of life are put together. When she realized she could make a living out of finding the answers, she jumped all in. She now works at NYU Langone Medical Center, designing experiments and crunching numbers to fight disease.