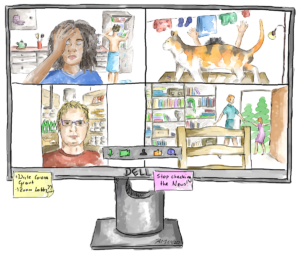 Are you a graduate student missing your windowless office? A professor whose virtual seminars could use a bit more… drama? A conference session chair tired of asking that one faculty member to stop interrupting? Then Zoom Academic* is for you.**

Streamline your research collaborations and enhance your virtual “classroom” with exciting new features, exclusively for academics!

1. Zoom Academic debuts the “Question Mode” feature, which uses artificial intelligence to identify a participant making a comment rather than asking a question, and automatically mutes their microphone.

2. Add dramatic effect to your Zoom lecture with the new “Live Score” feature, which composes a background score to your seminar in real time. We promise no one will fall asleep during your explanation of boundary-value problems with dielectrics when it’s set to Wagner’s “Ride of the Valkyries.”

3. Force professors to actually explain what they’re talking about with the “Jargon Catcher,” a filter that uses natural language processing to detect field-specific jargon and bleeps it out. “So it’s obvious that *BLEEP* is *BLEEPITY BLEEP*, if we trivially assume *BLEEEEP*… Oh bloody $%&#!”

4. Tired of live-tweeting conferences instead of actually paying attention? Check out our new Twitter plug-in for remote conferences, “#ZoomTweetsForYou,” which automatically transcribes random snippets of talks and tweets them for you—complete with the conference hashtag and the speaker’s handle.

5. In an effort to level out the academic hierarchy, the “Time-Out” feature allocates speaking time in group meetings or conference sessions based on the inverse of a participant’s h-index. If a participant exceeds their allotted time, Zoom mutes them and puts them in time-out in a corner of the screen.

6. Exclusively for the graduate student edition: When your advisor misses a Zoom meeting, our “Virtual Advisor” feature reconstructs a cyber version of them based on previously recorded calls. Your Virtual Advisor only says nice things and never asks why you didn’t make any research progress.

7. The “Let Sleeping Professors Lie” feature uses facial recognition technology to detect when a professor falls asleep in a Zoom seminar. It then alters the video so their eyes look open, and when they wake up, a prompt suggests a relevant question for them to ask.

8. To speed up interminable committee meetings, the “Speak-to-Squeak” feature gradually increases the pitch of each speaker’s voice as they talk. By the time everyone is talking in squeaks, the meeting naturally concludes.

9. The “Defense Defender” feature protects your thesis defense against Zoom-bombing by making all participants take a section of the GRE and score in the 99th percentile in order to join the meeting. This includes your thesis committee members—and if they fail, you automatically receive a Ph.D.

10.  Missing your office plants? The “Green Screen” feature adds a photo-realistic plant to brighten your video screen. The plant even slowly, inevitably dies over the course of your meetings to simulate normal office conditions.

11. Build new research collaborations with the “Interdisciplinary Mash-Up” feature, which randomly merges your group meeting with another in a different discipline. Please acknowledge Zoom when your paper on “The Effects of Cosmic Rays on Hippopotamus Mating Behavior” is published.

12. Finally, our most highly anticipated feature, “Zoomed Out,” uses proprietary software to detect the point in the seminar when everyone has completely zoned out. It then issues an apology to the speaker, ends the meeting, and lets everyone take a much-needed Zoom break.

*Zoom Academic is not a real Zoom product (but we wish it were).

**Please note that all the features of Zoom Academic are behind a secure paywall, are only available for nine months of the year, and require a VPN and three-factor authentication.

Kate Storey-Fisher is a Ph.D. candidate in Physics at New York University. She studies observational cosmology, applying data science methods to galaxy surveys in order to infer the fundamental properties of the universe. She spends her time debugging code, writing about astrophysics, and reimagining academic labor structures—all while zoning out in Zoom meetings.