A Guide To The Ultimate Staycation 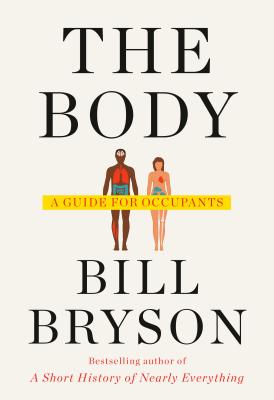 A Guide For Occupants

Whether you’re tall or short, chubby or thin, rich or poor, the human body you inhabit is one possession that’s yours and yours alone from the moment you were born to the moment you die. And yet how much do we really know about this little corner of the universe we spend our whole lives in?

After years of taking readers on fantastic voyages across the globe—from Hamburg, Germany to Australia’s Great Barrier Reef  to the Appalachian Trail in our own backyard—Bill Bryson returns to the world of science to take us on a tour of this ultra local (but no less exotic) outpost: the human body.

“We began our journey through history as unicellular blobs floating about in warm, shallow seas”, Bryson writes. “Everything since then has been a long and interesting accident, but a pretty glorious one, too….”

Bryson deftly mixes wit and science in The Body: A Guide for Occupants, as he shines light on this “glorious accident.” Each chapter of this well-researched but accessible ‘field guide’ is devoted to a different aspect of the body, so if you feel intimidated by the 400-odd pages of this book, you could easily skip a chapter or read them out of order without missing much.

Bryson quotes extensively from his conversations with scientists and doctors and cites relevant scientific sources to school us on the many wondrous facts of the human body. As a biologist, I have a certain familiarity with how the body works — but even I was surprised to learn some of the amazing facts Bryson reveals. Who knew, for instance, that a teaspoon of human blood contains about twenty-five billion red cells? Or that every breath you take contains 25 sextillion (that’s 25 followed by 21 0s) molecules of oxygen? Or that you share your body with roughly 40,000 species of bacteria?

What makes The Body truly entertaining, however, is not the many, many, many facts sprinkled throughout its pages: it is the stories of the physicians and researchers who discovered everything we know about medicine and the human body, and the risks they took to do it. Consider the tale of the pioneering and eccentric American surgeon William Stewart Halsted, who was a drug addict for much of his career but managed to develop many modern surgical techniques (often using his family members as guinea pigs). Halsted’s many accomplishments include one of the first successful emergency blood transfusions in America in 1881, before anyone knew about blood group incompatibility: he transfused two pints of blood from himself to his sister, saving her life. A year later, he performed one of the first successful surgical removals of the gallbladder—on his own mother—on a kitchen table. Later in life, he became a professor of surgery at Johns Hopkins Medical School in Baltimore, and continued to advance medical science—inventing the surgical glove, the concept of radical mastectomy and the “Halstedian technique” of surgical care and hygiene.

Many authors use anecdotes to make seemingly dry topics interesting—but Bryson goes one step further. He thumbs back through the history of medicine and highlights unsung heroes like Nettie Stevens, who discovered the Y chromosome; William Beaumont, who showed that food is digested by hydrochloric acid in the gut—with the aid of his patient, a Canadian fur trapper with a one-inch hole in his abdominal cavity; Albert Schatz, who discovered the commonly used antibiotic streptomycin, and many others. The stories of these often-overlooked scientists, retold in Bryson’s easy-to-read, droll style—describing an aorta from a cadaver as “a stiff, uncooked cannelloni shell” — make the minutiae of the human body easier to comprehend.

Along the way, Bryson handily dispels a number of myths and common misconceptions about human health. The idea that we use only 10 percent of our brains, for one: “No one knows where the idea came from, but it has never been true or close to true.” The myth that monosodium glutamate or MSG, a common food additive, is a potent toxin, for another: in fact, MSG it is found naturally in numerous foods including tomatoes, and has never been shown to cause any harm when eaten in normal quantities. Or the idea that the human body contains exactly 206 bones: in fact this is only an approximation—the actual number varies quite a bit from one person to the next.

Exhaustive and at times a tad longwinded, The Body still doesn’t claim to have the last word on any topic—something that I, as a biomedical scientist, really appreciated. It was refreshing to see an acknowledgement of how far we have yet to go in our quest to figure ourselves out. While informing the reader about our progress in understanding the quirks of our bodies and the chinks in our armor, Bryson also points out the many lingering mysteries of our physiology. How to stop hiccups. Why humans evolved to walk. What exactly triggers menopause in women. Theories abound—some fanciful, other credible—and Bryson adeptly walks us through them, while clarifying the gaps in our knowledge.

What we’re left with is not just a better understanding of the human body but an even greater appreciation of what enables our hearts to throb, our lungs to breathe and our brains to think. As Bryson himself points out, the human body “works twenty-four hours a day for decades without (for the most part) needing regular servicing or installation of spare parts, runs on water and a few organic compounds, is soft and rather lovely, is accommodatingly pliant, reproduces itself with enthusiasm, makes jokes, feels affection, appreciates a red sunset and a cooling breeze. How many machines do you know that can do any of that?” As a grateful occupant, I couldn’t agree more.

Rewatee Gokhale, Ph.D. (@wouldbescientist), is a postdoctoral scientist in the Department of Medicine at New York University School of Medicine. A developmental biologist by training, she’s currently trying to figure out how to target the uncontrolled cell multiplication in endometrial cancer.