A Kassandra For Our Time 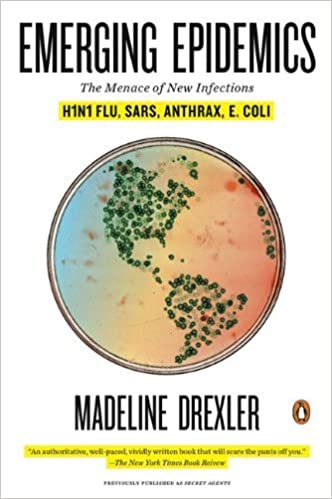 The Menace of New Infection

She tried to warn us.

Nearly two decades ago, science journalist Madeline Drexler first tried to warn us about what we were in for. In 2002, she originally published Secret Agents: The Menace of Emerging Infections to illuminate the dangers of a worldwide pandemic. In 2010, she revised that book and reiterated her message as Emerging Epidemics: The Menace of New Infection. Today, in 2020, her book detailing the global threats posed by infectious disease reads both as history and prophesy – the story of epidemics past and our pandemic present.

We live with a menagerie of microorganisms spread via insects, animals, foods, and our fellow humans. Drexler describes would-be epidemics – including E. coli, anthrax, and flu – that constantly stalk us. When the conditions are right, they strike with ferocity.

While the public may not perceive the impending threats, the experts do. Drexler weaves their warnings into the story of our invisible adversaries.

Emerging Epidemics unfolds as though the reader were part of Drexler’s fact-finding mission. We travel with her across the globe and meet a cast of both scientific and microbial characters. She brings us along as she chronicles encounters with a number of different infectious diseases – H1N1 flu, SARS, and mad cow disease, to name a few. We find microbial mugshots labeled as “agents” of particular diseases along with their scientific name and size in micrometers, providing the reader both with perspective and the sense that we’re catching a glimpse of the journalist’s notebook. We learn about the problems these diseases caused and the mayhem that could ensue if we don’t heed the warnings of the scientists who know these microorganisms best. “In the field of infectious disease,” Drexler writes, “reality is stranger than anything a writer could dream up.”

Across nearly 300 pages, Drexler reveals our greatest vulnerabilities in our struggle with microbes, highlighting a number of complex public health issues that undoubtedly contributed to the current crisis: uncertainty about where and when the next threat will arise, difficulty detecting the true signal of contagion from the noise of illnesses, and widespread resistance to planning for unknowable future events.

But Emerging Epidemics takes an even broader view — we should be worried about more than just the bugs. Among the many potential catalysts of a pandemic are several notorious scourges in the scientific community: the marginalization of women in science, the scarcity of funding in scientific research, and the tenuous relationship between science and politics. Their impact reaches far beyond the walls of the ivory tower. As Drexler points out, these problems can exacerbate emerging epidemics — with lethal results.

Bias faced by women scientists emerges as a theme in the chapter “Wing Victories,” which chronicles the mosquito-borne West Nile virus outbreak in New York City. While describing the events that led to the eventual identification of the virus as West Nile, Drexler profiles the scientists and medical professionals who recognized early on that something was amiss. The majority of these scientists were women. Marci Layton, Deborah Asnis, Annie Fine, Varuni Kulasekera, and Tracey McNamara all raised red flags in the early stages of the outbreak but were largely ignored. As Drexler notes, McNamara suspects that “a not-so-subtle misogyny also got in the way.”

As the scientists tried to make their voices heard during the West Nile outbreak, federal officials misidentified the virus, overlooked inconsistencies, and disregarded important clues.

Could gender or racial bias have played a role in fueling the COVID-19 pandemic? The answer may only become clear years from now, but we already have anecdotal evidence that several female heads of state, including Angela Merkel of Germany and Jacinda Ardern of New Zealand, have been particularly effective leaders in combatting global health crises.

Another common problem in the scientific community is the meager supply of research funding. The lack of money for studying microbes and potential treatments for infectious diseases is a recurring theme throughout the book. Within the first 10 pages, Drexler writes that between “1970 and 1975, as the National Institutes of Health budget increased 100 percent, the budget for its infectious disease arm rose only 30 percent.” Much of the NIH money goes to studying cancer and heart disease, the leading causes of death in the United States. We learn from Drexler that the dearth of funding for studying infectious disease has contributed to a lack of vaccines for known viruses, the rise of antibiotic resistance, and a flimsy foundation for defense against bioweapons.

But it isn’t just scientific research budgets that are suffering. Drexler goes on to highlight bigger cracks in the public health system that are particularly salient today: “Thirty percent of all U.S. hospitals are in the red and nearly 60 percent of academic medical centers can’t meet their operating expenses.” The true cost of these statistics can be seen now, as small-town hospitals close and hospital staff are laid off in the midst of a pandemic that continues to overwhelm hospitals across the country. COVID-19 has taught us that a single diabolically contagious virus can inflict enormous medical and economic harm. Maybe now, lawmakers will understand that the cost of funding in times of health will be worth it to offset the price of a pandemic.

“In pandemic times,” Drexler writes, “many seemingly scientific issues will hinge on nonscientific considerations.” She identifies tension between scientific interests and public health interests as one of the biggest pitfalls in combatting infectious disease. This tension is clearly salient now, as the country reopens and states show variable adherence to physical distancing and mask wearing guidance from the scientific community. Drexler also points to another challenge we may soon face: who in the population should be prioritized for vaccination? The high-risk or the healthy? Science suggests that vaccinating the healthy can halt the spread of disease, but would it be ethical to neglect those at higher risk of death?

While it will probably take at least a year until we are able to broach vaccination decisions, we can see divergent scientific and nonscientific interests impact policy decisions in real time. Physical distancing has driven up unemployment rates and propelled our economy towards a depression, leading many states to reopen even as scientists warned that it was too soon. As government and public health officials weigh the options, they may be wise to heed Drexler’s words: “preventing […] infections will take scientific and political courage.”

With the world currently in the throes of a pandemic, it’s difficult to understand everything that went wrong and what missteps might lie ahead. But many core challenges remain the same. Texts like Emerging Epidemics may help us understand how to best combat what Drexler might refer to as “The Once and Future Pandemic.” She tried to warn us twenty years ago. Maybe this time, we’ll listen.

Ali Cohen is a developmental cognitive neuroscientist at New York University and a self-proclaimed and now validated germaphobe.