A World Without Medicine 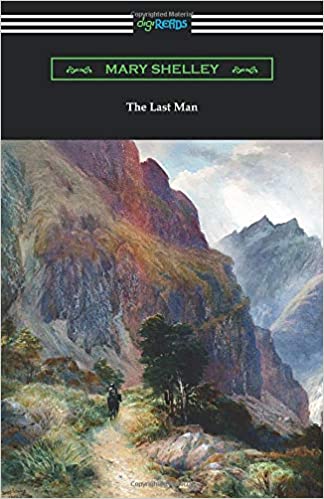 Most people know Mary Shelley for her science-gone-wrong masterwork, Frankenstein, but few are familiar with her post-apocalyptic plague novel, The Last Man. It is a tale of human extinction that again censures science and medicine—this time for their absence. With its rich description of anxiety, death, and isolation, the 1826 novel—labeled at its time as “a sickening description of horrors”—sold poorly and fell out of print until the 1960s.

The chilling effect of this disconcerting tale is only intensified for today’s readers owing to several eerie parallels between its prophetic fiction and our current reality: the COVID-19 pandemic and climate change. Though it was written over 200 years ago, Shelley’s rendering of loss, social isolation, and anticipatory anxiety at the unfolding of daily crises may strike many readers as all too familiar.

A beautiful and mournful tale that unfolds in three volumes, The Last Man is set towards the end of the 21st century. It tells the harrowing story of the human race’s slow annihilation by a ruthless plague, in a world riven by war and ravaged by fire and flood. Against this bleak backdrop, Shelley exalts the Romantic ideals of beauty, nature, and art—fashioning vibrant and admirable characters who die one after the other—while grieving the demise of Romanticism. The endless barrage of catastrophes allows her to explore the limits of human suffering and our capacity for resilience.

Through the eyes of the main character, Lionel Verney, we witness the individual and collective responses of England’s citizenry to a lethal airborne disease that spreads slowly but persistently from Asia over the course of a few years. In the initial months of the outbreak, government leaders deny that such a disease is capable of threatening England, citing the island’s protection by sea. As the disease spreads in Europe and supply chains are severed, “the necessaries of life become scarce” and the supply of livestock for sale at market is unable to meet demand.

Before the social disruption, oppressive heat, and horrible deaths begin to tear at the fabric of civilized behavior, Shelley’s characters pursue romance, and Romantic ideals. Lionel, an impoverished orphan, is taken under the wing of Adrian, the idealistic scion of a former king, who schools the young man in a love of knowledge and beauty. Their friend Raymond, renowned for his military prowess, has designs on the role of Lord Protector, but his ambitions change when he falls in love with Lionel’s sister Perdita.

These characters embody the quintessential elements of Romantic novels: rich family histories and detailed personality descriptions that highlight each characters’ virtues and vulnerabilities. Through these vivid descriptions, we see how the orphan and the royal, the sensible and the idealistic, the proud and the tenderhearted all deal with the unmatched trials fate presents. The frivolous concerns and idealized relationships between characters in Shelley’s first volume may remind readers of other Romantic novels, wherein the ‘truth universally acknowledged’ is that finding a suitable partner is of unsurpassed importance. Deeper into the novel, however, we see these beloved characters suffer the harsh realities of plague and rising temperatures, which makes the disease only more contagious. It’s a train-wreck in slow motion, and even our tears can’t stop us from staring.

Though set in the future, technologically speaking The Last Man resembles 1820 much more than 2020. People communicate through hand-written letters and travel primarily by horse, ship, and the occasional hot air balloon. The only scientific expert in her cast of characters is the meek astronomer, Merrival, who personifies the very absence of effective innovation and assertiveness required to confront the plague and the climate crisis. Theories of disease contagion and standards for health care in The Last Man reflect Shelley’s time, predating Pasteur’s germ experiments and Nightingale’s hospital reforms.

Although the florid 19th century prose may deter a few, Shelley’s character portraits and heart-wrenching passages are exquisite. She renders horror beautifully, and grief truthfully. “I turned to the corpse strewn earth: and felt ashamed of my species. So perhaps were the placid skies; for they quickly veiled themselves in the mist…and red and turbid lightening shot from the dark edges, the rushing wind disturbed the garments of the dead, and was chilled as it passed over their icy forms.” The melodramatic language and vivid detail capture both the slow-motion lived experience of trauma and the unrelenting ache for that which is gone. “Posterity is no more, fame, and ambition, and love are words void of meaning; even as the cattle that grazes the field, do thou, O deserted one, lie down at the evening-tide, unknowing of the past, careless of the future.”

Given the depth of Lionel’s grief and sentiments toward those he loves, it’s not surprising to learn that Shelley herself was no stranger to loss. The characters Adrian and Raymond are said to be inspired by members of Shelley’s circle, Percy Bysshe Shelley, her husband, and Lord Byron. Prior to writing the book, Shelley had endured the death of three of her children, the drowning of her husband, and the illness of Lord Byron, all within the span of a few years.

The spread of the plague described in The Last Man, and humankind’s response to it, feels prophetic. Since I’m both a nurse and a scientist, gazing into Shelley’s alternate universe not only elicited unease, but also feelings of hope and gratitude. At the start of this year, the World Health Organization—the same organization that announced COVID as a pandemic—declared 2020 as “The Year of the Nurse” in honor the 200th anniversary of Florence Nightingale’s birth. This founder of modern nursing revolutionized health care by organizing hospitals to promote healing and reduce infection, but she would have been only six years old when Shelley’s tale was published. The Last Man is not only a plague story, but a tale of a world without nursing, medicine, or scientific ingenuity. Unlike Frankenstein, where scientific ambition begets abominable horror, it is the absence of science that is truly horrifying. And while scientific progress over the last 200 years—nonexistent in the Shelly’s imagined world—is a comforting distinction, this distinction may be short-lived if we fail to embrace scientific evidence in our response to COVID.

Stories of brutal violence, bitter heartbreak, and rampant disease punctuate the history of civilization, yet despite all these sufferings the human species endures. The Last Man is a bleak saga that may hit too close to home for some audiences today. It’s a dark novel indeed, but this “brimful cup of joyful agony” is surprisingly soothing. Shelley offers solidarity to anyone who knows the pain of loss or loneliness and a reminder to cherish the impermanence of beauty. She denies us the assurance that ‘everything will be okay,’ in exchange for understanding ‘things are tough right now.’ Hope is fine, but there’s no salve like sincerity.

Nicole Perez is a psychiatric nurse practitioner and PhD candidate at NYU Meyers College of Nursing who believes public health policy should be guided by scientific data.