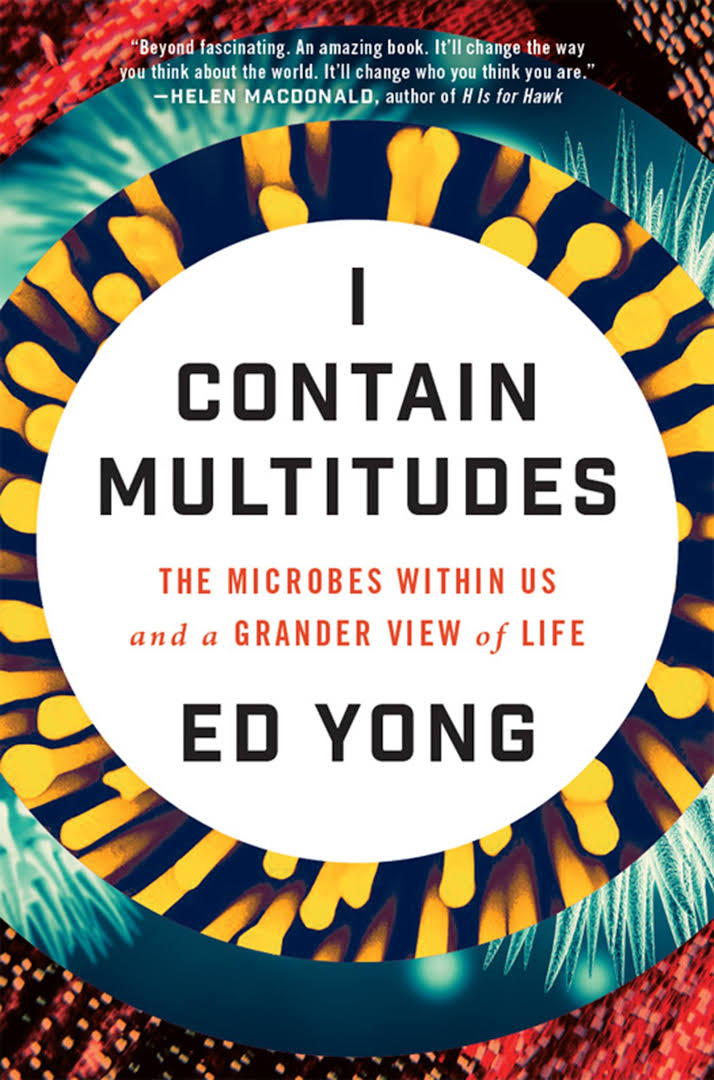 The Microbes Within Us and a Grander View of Life

“Our lives are heavily influenced by external forces that are actually inside us,” writes Ed Yong, whose new book I Contain Multitudes celebrates our place in the universe of microbes that swarm in and around us, more numerous than stars in the Milky Way.

The idea that we are inseparable from our microscopic colonizers isn’t new. It’s become a mantra for the blossoming field of microbiome research—the study of how the bacteria, fungi, and viruses that live on our skin and inside our guts shape our development, our health, even our moods.

For centuries our view of microbes was rather one-sided. They were pathogens, germs to be exterminated with soap and antibiotics. Only in the last few decades has that perspective shifted. The rapid evolution of DNA sequencing technology, combined with Carl Woese’s discovery that a telltale gene called 16S could be used as a universal unit of comparison between bacteria, finally allowed scientists to study microbes without needing to first grow them in the lab. And when they looked, they found a stunning diversity of microbes everywhere they looked. Inside steaming hot springs, at the bottom of the ocean, and in the depths of our own guts. Some estimates suggest that inside each of us are several pounds of bacteria—a “teeming organ” the function of which we are only beginning to comprehend.

Yong pithily captures the revolutionary shift in scientific thinking that occurred when researchers finally grasped that at least half of the cells in our bodies don’t actually belong to us. “We see individuals, working their way through life as a bunch of cells in a single body, driven by a single brain, and operating with a single genome,” he notes. “This is a pleasant fiction. In fact, we are legion, each and every one of us. Always a ‘we’ and never a ‘me’.”

As a graduate student in a laboratory studying how the immune system interfaces with the microbiome, I was immediately drawn to this book—but I was also on guard for the groan-inducing overstatements that mark so much popular science writing on the topic.

Joining an ever more crowded landscape of books on the topic, Multitudes easily distinguishes itself. Broadening his perspective beyond humans to the entire animal kingdom, Yong covers an ambitious amount of ground. Zipping effortlessly through time and geography, he alights on vignettes of animal-bacterial partnerships, stalemates, clashes. A memorable example is the story of the bacteria Wolbachia. It’s one of the most successful living organisms that you’ve never heard of and it thrives by “manipulating the sex lives of its hosts to further its own ends”

Yong is as smitten with the bugs as with the researchers who study them, creating a series of character profiles that bring mealy bugs, tube worms, and other creatures (including scientists) vividly to life.

Take the portrait of Rob Knight. This lanky New Zealander with buzzcut hair is a modern day naturalist. He’s swapped the butterfly net for the cotton swab and, with the aid of a DNA sequencer rather than a microscope, he compares the bacterial communities living on his forearm to those on the scales of a pangolin, “an utterly endearing animal that looks like a cross between an anteater and a pinecone.”  Or consider the “oozing personality” of the bobtail squid, an ocean-dwelling creature that hides its own shadow with help from a luminescent bacterium that lives in specialized light organs. When we first meet, in a lab at the University of Wisconsin, the squid “tucks its arms under its body and mooches on them, changing shape from a dart to a large jelly bean.” And the citrus mealybug is “a living matryoshka doll” that exists as a bacteria nested within another bacteria within an insect. The stories are as diverse as they are fascinating. And although, at times, the tales become overwhelmingly comprehensive, a theme clearly emerges: everywhere we look it’s bugs all the way down.

Ed Yong’s advanced degrees in biology and his science writing chops (he is a well-known blogger who writes for The Atlantic and, before that, National Geographic) are evident as he expertly distills decades of research without compromising accuracy. His writing vibrates with enthusiasm while carefully measured language preserves his credibility. Unlike some of his peers, Yong resists the urge to inflate the implications of many a tantalizing study. Having passed at least this scientist’s BS detector, I Contain Multitudes is safely out of the running for an Overselling the Microbiome Award.

Yong has a particular skill for rendering the invisible visible. A frequent sensation while reading Multitudes was the tickle of my brain lighting up with sudden bursts of comprehension. To cite one example, he elegantly explains the complex molecular behaviors of microscopic bacterial communities in the more tangible terms of geography and ecology: “Different islands, different species, same jobs. In New Zealand, kiwis root through leaf litter in search of worms, doing what a badger might do in England.”

While deft at illuminating complex scientific theories, Multitudes perhaps leans a bit too heavily on the man-is-an-ecosystem analogy. Yong tries to stuff so many anecdotes into this worldview that some are bound to be an awkward fit. By the end, some readers may feel exhausted by the recurrent metaphors that locate this thrilling scientific story in “the oily lakes of the face and hot and humid jungles of the groin and armpit.”

That said, I Contain Multitudes delivers. Part nature doc, part microscopic soap opera, it teaches as it entertains. And woven throughout, a larger narrative emerges. The stories of individual scientists toiling on seemingly insignificant model organisms converge to reveal a truly grander view of life. It’s a history lesson. A defense of basic research. The type of science that at first appears to be pure esoterica, lacking practical application. As was the case for Carl Woese’s  seminal work on the 16S molecule, it can be “expensive, slow, and dangerous, involving worrying amounts of radioactive liquids.” Politicians are often eager to slash funding for these kinds of studies. But given time, microbiome research has revolutionized our thinking about biology and medicine.

“For centuries,” Yong notes, “the human microbiome had lurked in the outfield of biology, championed by rebels and iconoclasts.”  As microbiologist Margret McFall-Ngai tells the author, “It was completely backwater science; now it’s front-seat science.” Thanks to I Contain Multitudes, we have tickets to the show.

Maria Pokrovskii is a PhD student at New York University. She is fascinated by the workings of the immune system and the characters she meets in academia.