Canary In The Climate Change Coal Mine 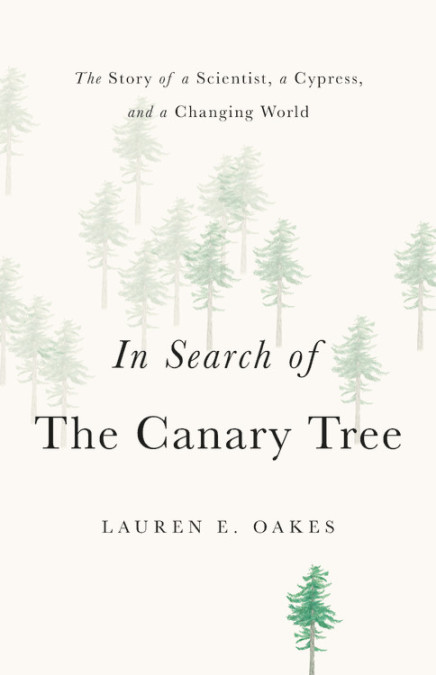 In Search of the Canary Tree

The Story of a Scientist, a Cypress, and a Changing World

Our world is warming. Natural calamities of staggering size and scope seem to strike with increasing frequency. As I write this, my own friends and family are threatened by raging wildfires in California that are eating through drought-ravaged landscapes – the result of rising temperatures. Climate change is vast in its effects, and monumental in the ways it will continue to shape our lives. How do we fathom this uncertain future?

For ecologist Lauren E. Oakes, her window into the coming days is a single plant species: the Alaskan yellow cedar, or cypress, as it is sometimes called. In her ominous, yet unexpectedly hopeful book, In Search of the Canary Tree: The Story of a Scientist, a Cypress, and a Changing World Oakes takes us to the archipelagos of Alaska where, during the her doctoral fieldwork, she studied a massive dieback of yellow cedars that created entire islands of standing tree graveyards. This tree is Oakes’ canary in a climate change coal mine, “calling out for our own inevitable demise.”

In 2010, Oakes was a young graduate student studying ecology at Stanford University. She traveled to the Alexander Archipelago in southeastern Alaska, in search of a topic to study for her dissertation — she did not expect to be so enthralled by the bristly, lanky yellow cedar. In the end, she studied not just how the species of trees were affected by climate change, but how the people of southeastern Alaska who lived and worked with the trees were affected by the trees’ dieback. She measured 2,064 trees and 882 saplings, accumulated 1,500 pages of interview transcripts, published articles in journals, and defended her thesis. This book is Oakes’ way of sharing the “story that felt untold.”

For a project that chronicles the swift death of a species, the overall tone of Oakes’ book is stubbornly optimistic. The main question that Oakes wants to answer, as an ecologist, is not how the trees are dying, but what happens after they die. How do the forests, and the people living off those forests, adapt? What new life and new ways of living take over the old?

The book’s elegiac descriptions and drawn illustrations of the dying trees are as enchanting as they are heartbreaking. Through Oakes’ retelling of her expedition into the harsh realities of Alaska’s disappearing yellow cedar forests, we develop a relationship with this special tree alongside her, and feel the loss as well. The first time she sees the standing dead with her own eyes, she is shocked by the “white skeletons of overturned trees – standing on end like telephone poles.”

With vivid imagery and deft narration of the rigorous scientific protocols that go into an ecological study of such magnitude, Oakes gives us a deeply personal account of the weeks she and her team spent sampling the graveyard forests of Alaska. In this first part of the book, we learn of the labor, the danger, the wet socks, the jellyfish floating underneath the kayak – all the hardships and minor victories and dizzying falls into the roots of overturned fallen giants that typify research in the field.

It is thrilling to get this rare insight into the life of a field biologist. The methods sections of ecology papers famously understate the grueling months of work that go into field studies, but Oakes does not hesitate to share the unsavory details of her first independent ecological study. She was breaking up with her partner over satellite phone, only to get interrupted by a brown bear. She turned thirty surrounded by the corpses of dead trees.

Trees were not the only subjects she sampled. In the second part of the book, Oakes introduces us to a diverse cast of Alaskans who all have their own relationships with the trees, and their own ways of adapting to the uncertain future. She surveyed members of the Alaskan community, from ecologists to Native Alaskan carvers to foresters, asking them how their lives have been impacted by the yellow cedars. For Oakes, the people whose lives revolve around the trees mattered to her study just as much as the trees themselves.

We meet Ernestine Hanlon-Abel, a weaver from the Tlingit tribe, as well as Cathy, her niece and apprentice. For them, the loss of the yellow cedar is especially grave, since their culture uses its bark in their weaving. Losing the trees is like losing a connection to their ancestors. To Oakes’ initial disbelief, Ernestine tells her, “Wilderness is a curse word to us.” Ernestine and Cathy want a balanced coexistence between nature and people, and for people to be educated in sustainable ways of living: to “have them learn the value of what they’re using.” Even when what they say surprises her, Oakes is faithful in letting members of the community speak for themselves. The multitude of characters occasionally overwhelms, however, and the story sometimes loses it cohesiveness.

The struggle of coping in the face of such loss is the main theme of the third and final part of the book. It is a daunting task to try to find hope in the face of such ecological tragedy, but Oakes braves it nonetheless, sometimes at the risk of her book’s momentum. Just as she gets lost wondering about what all of her collected data can tell her about the future of the world, so do we.

There is light at the end of the stream-of-consciousness tunnel, however. Oakes comes to the realization that it is still possible to be optimistic about the future despite having an ecologist’s keen awareness of the facts surrounding global warming. And this optimism stems from her fundamental belief that there is still so much we can do in our daily lives to stem the tide of ecological collapse. It is advocacy on a small scale, contributing to a better understanding of climate change, the “double-c word” as Oakes refers to it. From foresters to weavers to farmers, Oakes is optimistic that people, on a local scale, are shifting their lives and habits to accommodate the uncertain future.

In Search of the Canary Tree is Oakes’s call to action, her way of sharing what she knows with a world that seems set on blindly charging into its own demise. The future may be uncertain, but “the need for unwavering care and thoughtful action” is paramount for her: not losing sight of the everyday struggles in the ominous, uncompromising face of climate change. The most essential fight, Oakes argues, is the “fight for what we can still curtail.”

Mariyah Saiduddin is a Ph.D. student studying developmental genetics at New York University. When she’s not puzzling out the molecular mechanisms of early embryos, she is contemplating the impending demise of the planet.