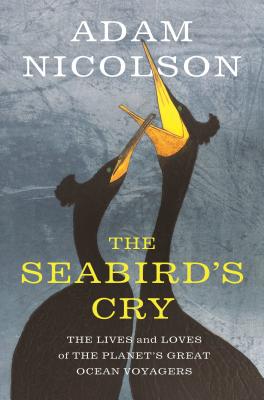 The Lives and Loves of the Planet's Great Ocean Voyagers

Adam Nicolson has been a diehard seabird enthusiast from an early age. He starts his new book by describing an unforgettable trip with his father to watch seabirds on the Scottish island of Shiants when he was a boy. The trip — to a private island far off the shore of Scotland, led by “Gaelic-speaking fishermen and shepherds on a rolling herringboat” — was promised many years before it became a reality. When the island finally came into view in front of him, the eight-year-old Nicolson found himself surrounded by 300,000 birds “on the sea, in the sea, in the air and on land.” From that moment on, Nicolson’s love for seabirds has only grown. In pursuing this passion, Nicolson has traveled far and wide—“up the west coast of Ireland to St Kilda, Orkney, Shetland, the Faeroes, Iceland and Newfoundland, to Ascension, the Falklands, South Georgia, the Canaries and the Azores”—to observe seabirds.

In The Seabird’s Cry, Nicolson, a best-selling author, advocates for seabird conservation by describing the life and loss of ten Atlantic seabirds species. He devotes one chapter to each in an attempt to answer how seabirds –unique among all animals on earth– are able to live “in all three elements”: land, ocean, and air. Nicolson uses scientific experiments, personal observations, stories, historical citations, legends, poems, songs, and even mythology to illustrate the flight, parenting behavior, and human interactions of each seabird species. In the final chapter, Nicolson makes an impassioned—perhaps too impassioned—argument for seabird awareness and protection. No one would question Nicolson’s goodwill, but his one-sided advocacy ultimately made me uneasy.

The Seabird’s Cry is purely informative and entertaining until the end of the third chapter, devoted to a species of gull called the ‘kittiwake.’ Here Nicolson raises his voice and asks a question for which he already has an answer: “There is elasticity in nature, but is it elastic enough to cope with the strains we now at least know we are imposing on it?” From that point on, the book shifts to an exercise in advocacy. In each subsequent chapter, Nicolson details human behaviors, past and present, that have led directly to the decrease of Atlantic seabirds. We have killed baby fulmars for food, kittiwakes for fashion and hobby collection, great auks for fun, gulls out of simple annoyance, and albatrosses out of superstition.

The consequences of these mass killings reach a climax in a chapter describing the extinction of the great auk, a flightless bird living near North Atlantic coastal waters. By this point, Nicolson’s voice becomes accusatory. “We are the holocaust,” he writes, “the destroyers of what we come to live with, and not only because we hunt them. We bring with us the other three horsemen of the apocalypse: habitat destruction, diseases which the indigenous animals have no defense against, and the introduction of other predators.” I hate to agree with such shrill language, but what he claims is not inaccurate.

After the unrelenting accounts of dying seabirds, it is almost a relief when Nicolson turns to science in the chapter on albatrosses: he describes how researchers have learned about the albatross over the years through trial and error, making the important point that the first step towards conservation is to increase our scientific knowledge about seabirds.

Science and technology in fact have vastly increased our appreciation for Atlantic seabirds. To learn about where seabirds feed and when they leave their young, scientists have tried to track the birds for decades. Nicolson describes the effort to track albatrosses in great detail—from 1960s, when an electronic tracking device weighed 20 lbs and cost $65,000 (“six times the annual salary of a secondary school teacher”) to 1999, when three miniature instruments, weighing 2 ounces in total, could easily fit onto a bird. As Nicolson makes clear, “understanding of the albatrosses deepened with the developing technology.”

With these amazing tracking experiments, scientists have learned where seabirds live, breed, and fish—data that provides solid evidence to advocate for seabird conservation. Nicolson also describes scientific experiments showing increased levels of corticosterone, a hormone released in response to stress, in sibling-killing seabirds, as well as elevated levels of testosterone, a hormone linked to aggression, in chick-mounting adolescent bully gannets. Scientists have also studied the breeding habits of different seabirds by observing the reaction of parent birds to the removal or addition of eggs in their nests.

Nicolson does an admirable job of cataloging the lopsided interactions between humans and seabirds, especially in the past. On the islands of St Kilda, in the Outer Hebrides, he notes that local residents killed 12,000 fulmars a year, taking the chicks “just at the moment” when they were dripping with fat—a result of their parents painstakingly stuffing them with nutrients needed to survive cold days. By the sea cliff, Victorian sportsmen played a favorite game called “shooting-flying”—“taking [young puffy kittiwakes] on the wing and not having to wait” until they settled. “In four months,”  Nicolson writes, “107,250 birds were destroyed by pleasure parties.” Across the Atlantic Ocean, European and American women reading Harper’s Bazaar debated between purchasing a hat with a whole dead bird as an ornament, or just a bird head and some wings. Sailors in Newfoundland tested “the most common and effective way of killing [great auks]”—luring them with codfish liver and “killing or maiming a score or more at a single sweep [of a whip].”

Kill. Kill. Kill. Nicolson’s descriptive style reminds me of the mass killing in the movie Godfather I, with soothing classical piano music in the background. “In the last sixty years, the world population of seabirds has dropped by over two-thirds,” he writes. “One-third of all seabird species is now threatened with extinction. Half of them are known or thought to be in decline.”

What can be done to save the seabirds? In 2015-16, a team of specialists, funded by the European Union and Scottish Natural Heritage, arrived in the Shiants to eradicate the local rat population, which prey on seabirds. While Nicolson cheers this first attempt to protect seabirds, I felt deeply conflicted by this action. Several months ago, New Zealand started their version of mass killing of “pest” rats by dropping poisonous bait from a helicopter to save “indigenous” species. In the Galapagos Islands, conservation groups have eradicated goats, originally brought to the islands by European sailors, to protect the native tortoise population.

Every living species has a role in ecology, and the life and death of each species is intertwined with another. It is impossible to remove one species from the ecosystem without affecting others. In 2016, the effort to control Zika-carrying mosquitoes killed millions of bees in South Carolina, harming local agriculture. The massacre of “dangerous” wolves in the Yellowstone National Park led to the rise of coyotes, which drove down the populations of antelopes and voles, led to an overpopulation of elks that overgrazed vegetation, deprived beavers of food, and led to the starvation of scavenger animals such as ravens, bears, and eagles, which fed on the kills of wolves. Removing one animal species led to a cascade of deleterious and unpredictable shocks to the ecosystem.

In the end, The Seabird’s Cry is gruesomely informative and thought-provoking, driven by the author’s passion for seabirds. Seabird conservation is certainly important, but conservation that privileges selected species can be dangerous, especially considering our limited knowledge of ecosystems. Pollution and overfishing should be controlled, and natural habitats of animals should be protected. But killing one species to save others should give us pause.

Li Wang is a nature and animal lover who recently received her Ph.D. in the social behaviors of mice at New York University School of Medicine. She organized an event called “Evolution 2.0” for Taste of Science (a global non-profit organization for science communication), which educated the public about how urban development has affected the evolution of animals species.