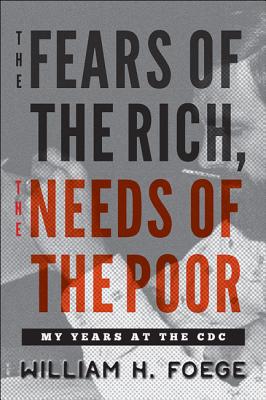 The Fears of the Rich, The Needs of the Poor

My Years at the CDC

For a time, there was no greater enemy to Reaganomics than American epidemiologist Dr. William H. Foege. During his seven-year tenure from 1977-1983 as director of the Center for Disease Control (CDC), Foege often butted heads with congressmen who were at the beck and call of gun and tobacco lobbyists. When the CDC was in the midst of establishing a causal link between tobacco and lung cancer, a congressman from Kentucky (who was also chair of the Committee of Appropriations) would begin every budget hearing by reading to Foege an antiquated quote from his predecessor at the CDC that in effect denied smoking as a significant health problem. At the height of the AIDS outbreak, a New York congressman staged a congressional hearing in an unsuccessful attempt to strong-arm Foege into revealing the names of those infected.

“The job of public health is try to rewrite history before it happens…I had no idea how hard it would be in practice,” Foege writes in his autobiography, The Fears of the Rich, The Needs of the Poor, which recounts his half century of public service. “We are surrounded by enemies. Some are so small that they require microscopes to be seen. And some are in suits, occupying congressional offices or lobbying organizations, representing specific and special interests, rather than the interests of the public,” he continues. The CDC was headquartered in Atlanta instead of Washington, D.C., he notes, specifically to afford the agency sufficient autonomy to navigate pivotal public health challenges.

Foege had set out to become an internal medicine physician and even accepted a residency position in that field, but a once-in-a-lifetime opportunity swept him away at the eleventh hour. Weeks from graduating medical school at the University of Washington, young Foege received a phone call from the head of the CDC’s Epidemic Intelligence Service (EIS), an elite team of epidemiologists tasked with investigating disease outbreaks. Foege took the plunge. His training at the EIS brought him to the epicenter of a major smallpox outbreak in Africa, which is where his journey into public health truly begins.

The Fears of the Rich, The Needs of the Poor provides a thorough and intimate account of a former CDC director’s public health odyssey. It is part memoir, part medical history, and part social commentary. Foege devotes the first half of the book to his field officer days. There, he painstakingly recounts his epidemiological team’s herculean mission in the 1960’s and 1970’s to eradicate smallpox, a highly contagious and deadly disease that we now know is caused by the variola virus. He spent almost a decade in Nigeria and the Indian subcontinent supervising a labor-intensive program called “ring vaccination,” where field workers quarantine those that are infected and then vaccinate every last person that might have been exposed to the infected individual. The successful eradication of smallpox led by Foege’s team is public health at its finest: Smallpox remains the only infectious disease in human history to have been completely eliminated.

According to Foege, responding to epidemics anywhere in the world is the “ultimate” way to shield Americans from deadly diseases like smallpox. The successful worldwide eradication of smallpox explains why the United States, with its resources and scientific know-how, has historically had both an ethical and self-serving obligation to help contain disease outbreaks abroad. The main obstacle has been at home: getting people with financial or political muscle to actually care. For them to care, the disease must pose a direct and immediate threat in their backyard – which is why drug-resistant tuberculosis gets funding, for instance, but not malaria. Foege reminds us of this with the book’s title, which succinctly prescribes a solution towards health equity: we need to “figure out how to link the fears of the rich to the needs of the poor.”

Foege artfully gives unsung heroes their due. In one chapter, he calls American microbiologist Maurice Hilleman, a name unrecognized by most outside of the CDC, the “Louis Pasteur of our time.” Hilleman almost single-handedly developed over 40 vaccines, including those for hepatitis B and measles, mumps, and rubella (MMR), although he chose not to name any of them after himself.

In another chapter, Foege celebrates the career of Matthew Lukwiya, an “uncommonly gifted” Ugandan physician, who heroically diagnosed and contained the 2000 Ebola outbreak in his home country. By the time the World Health Organization arrived on the scene, they had little to do in terms of disease containment, because Lukwiya had already fastidiously implemented state-of-the-art isolation procedures. His life ended tragically, however, when in an attempt to stop an infected patient from leaving the hospital in the middle of the night, Lukwiya hastily donned his protective gear – everything but his pair of goggles, which left him exposed to the Ebola virus. Two weeks later, due to this single break in protocol, Lukwiya lost his own life to the disease from which he saved thousands of others. Combatting a deadly infectious disease such as Ebola only sounds “exciting and glamorous to those who have never been in this situation,” stresses Foege. Lukwiya, like many other public health heroes, paid the ultimate price for his service.

Perhaps due to his overly humble nature and discomfort with attention, Foege spends a disproportionate amount of his book shining the limelight on others. He seems to mention every colleague he has worked with (even if in passing), which I found at times distracting to his own narrative. At one point, he refers the reader to a “fuller list” at the appendix because he couldn’t fit all of his acknowledgements in the main text.

Although Foege writes his autobiography like a buttoned-up historian, he still slips in nuggets of self-deprecating humor. On the day when he was appointed CDC director, Foege was told not to tell anybody including his own wife until the press photo and release were in order. The man overseeing the press release hurriedly gave his own suit coat to Foege, which comically turned out six inches short at the sleeves. Foege stood six-foot seven and although he was promised a just headshot, his official photo showed him in the entire suit. He includes this photo for the reader’s entertainment, successfully breaking the fourth wall.

As Foege delves further into his career as CDC director, his tone, to my relief, becomes more prescriptive than summational. This at times comes across as a rebuke to the current administration’s antagonistic relationship with public health, which Foege likens to the Reagan-era bully tactics of intimidation, litigation, and blind obeisance to industry lobbyists. During the 1980’s, he notes, the CDC discovered a causal link between a rare but fatal disease called Reye’s syndrome and aspirin use in children recovering from a viral illness like chickenpox and the flu. In an attempt to suppress publication of the CDC’s findings, aspirin manufacturers repeatedly badgered Foege by phone at his every possible location (including his parents’ home) and even pressured the White House to issue a cease and desist order. Foege marched forward nevertheless, publishing the Reye’s syndrome study because the public deserved the truth.

Over the years, the definition of public health expanded from disease prevention to preventing injury – which in turn led to “all areas of violence,” including injury caused by guns. In the 1990’s, the CDC established a subdivision to study gun violence, only to be shut down four years later by a congressional budget maneuver called the Dickey Amendment that stripped away “the precise amount” the CDC had line-itemed for firearms research. The recent mass shooting in a high school in Parkland, Florida reminds us that our communities today are not any safer from gun violence than they were two decades ago with Columbine.

Public health “absolutely needs the support of politicians,” Foege writes. But he warns that we citizens also have a responsibility to remain vigilant and proactive for the sake of our communities. When our political representatives “vote not to provide early education, medical care, prevention, or Medicaid expansion, we as voters kill through errors of omission.”

Alice Fok is a M.D./Ph.D. student at the New York University School of Medicine.