Geometry And How We See The World 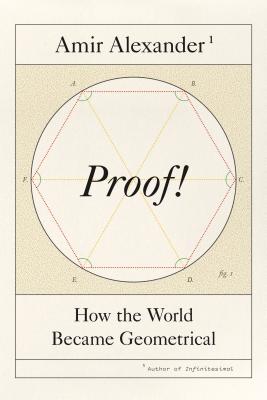 How the World Became Geometrical

Once upon a time, there was a single truth. Standing on the opposite side of this truth were falsities, fallacies, and flaws — all to be dismissed, while the single truth, the indisputable facts, are idealized.

The longing for a simple and absolute truth started centuries ago. Yet this idea departs from our daily accessible human truth, which lives in the eye of the beholder. Our perceived truths are far from simple and absolute. We see the same world in different colors and shades because our eyes slightly differ in biological properties. Even more complex is how we symbolically see: we see different meanings and intentions behind an action, and we see “alternative facts.” We live in our own “bubble of seemingly self-consistent truths,” according to Amir Alexander, a professor of history at UCLA. These truths can sometimes be so diverse that they are “entirely incompatible with those of the opposition.”

Some people may perceive the coexistence of different types and shades of truths as fragmented, others as liberating. Alexander, who has a track record for finding principles of societal organizations in mathematics, takes us back to a time and place where all complexity recedes and where “idealistic and rational order” resides: Euclid’s Elements, a third century BCE mathematical treatise. In this influential set of volumes, Euclid, the Greek mathematician, presented geometrical findings in a hierarchical order: any result in the book can be derived from the previously presented results, and layer by layer, each result can be traced back to the initial assumptions asserted at the beginning of the book.

While geometry to most students nowadays means a set of rules on how to calculate lengths, areas, and angles, it was in geometry, according to Alexander, that the very first set of mathematical proofs were established. The implication of this transcendent invention — almost the sole job of later mathematicians—was not at all obvious at the time. Moreover, the Elementsnourished the human longing for a rationalistic ideal. The proofs in geometry represent a strict logical reasoning that “discards everything that is erroneous, unessential, and transitory,”Alexander writes, requoting Plato, and “leaving us with truths that approach the eternal forms.”

The hierarchical organization of Elements established an ideal beyond the simplistic and rational. It embodied an even more fundamental ideal that is hierarchical and eternal: a perceptual, and a political, ideal. In Proof! How the World Became Geometrical, Alexander starts with Elements, and argues that the idea of eternal geometrical truth ultimately led to the perceptual and political creations of the Renaissance — the invention of perspective drawings in Italy, the professionalization of French geometrical gardens, and eventually, the evolution of French political structure into centralized power.

Through the lens of “geometry,” we relive the political transitions during the French Renaissance — the lives, deaths and ambitions of kings and their heirs. Alexander attempts to convince us that what we see perceptually (the geometrical gardens, for example) quite often is inseparable from what we symbolically see. The French kings, one generation after another, while gradually ascending to the apex of centralized power, also developed a taste for ever more awe-demanding and center-emphasizing geometrical gardens. The Sun King, Louis XIV, in particular, envisioned a harmonious kingdom that would be “flourishing under the rule of a monarch whose absolute powers were grounded in the rational order of the world.” Therefore, the Sun King’s geometrical garden in Versailles never disappoints its visitors — not necessarily with its beauty, but with its grandeur, its centralized layout, and its “ritualized performance of the hierarchies.”

Modern readers like you and I may be more ambivalent about chasing after a single ideal. Who needs an ideal? You and I have our chaotic human flaws. You and I are not symmetric enough, not simple and rational enough. We will likely die without ever changing the trajectory of human history, and without ever being regarded or perceived as super-humans. It is the less than ideal, and the more complex than ideal, that distinguish our human reality from our wishful imagination. The orderly and rational geometrical ideal, though widely appreciated, is only imposed and dictated by people who crave it in the extreme. Kings and Queens, albeit being on top of the social hierarchy, still struggle with fear and live in hatred of losing control.

Alexander contrasts the succinct and orderly description of the human achievement of geometrical understanding and cultivation (geometrical gardens) with often unexpected human chaos. Cathrine de Medici, widow of Henry II, mother of three kings, unloved and untrusted throughout her youth, “pursued a steady cultural policy that never changed course and never wavered.” She transformed the originally pleasant geometrical gardens into royal propaganda. Louis XIV — who was kept powerless during his teens, and who later became “proud and unreflective” — made life during his reign about an endless series of hierarchical gestures that “were only readable to those who spent their life deciphering the codes of courtly behaviour.” Yet such a life, according to Alexander, well captured Louis XIV’s imagined geometrical and orderly ideal.

The Sun King is long gone, yet our human search for ideals that capture our new and varied wishful orders continues. Four centuries after the Sun King’s death, Alexander concludes, we have come to a realization that we don’t share a single perception, a single expression, or a single truth. And there has been a growing need for different expressions to co-exist, to be equally recognized and sometimes be equally appreciated. For this new egalitarian societal ideal, Alexander proposes an alternative geometrical root, “Riemannian geometry.” By introducing a slight change in the assumptions of Euclidean geometry, Riemannian geometry allows for co-existence of an infinite number of self-consistent and parallel geometrical systems.

Alexander’s new geometrical analogy captures our co-existing and parallel societal truths. But what geometrical analogies cannot capture is our constantly evolving human need for new understandings, new systems, and for inventing new needs. A mathematical system is necessarily self-consistent. Humans, on the other hand, despite our lack of order, simplicity, and rationality, learn from others, reflect on our imperfect past, and evolve into different systems little by little, day by day.

Jingyang Zhou is a postdoctoral researcher in visual neuroscience at NYU.