How Your Brain Makes Meaning 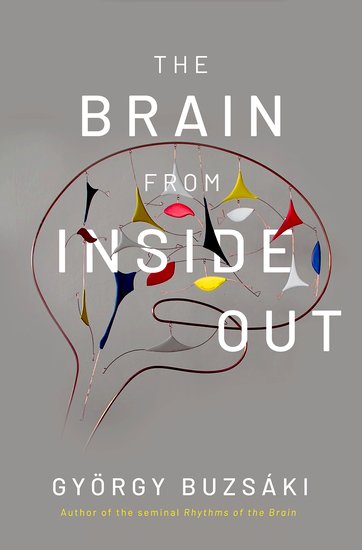 The Brain from Inside Out

When neuroscientist György Buzsáki was in middle school in Hungary, he strung up a wire antenna between two chimneys, learned Morse code, and became a ham radio operator. He was delighted that learning this code let him translate otherwise meaningless streams of dots, dashes, and pauses into messages that could be communicated across the globe. And, as he writes in his new book, The Brain from Inside Out, “the problem of coding has bugged [him] ever since.”

In neuroscience, coding is a tough problem. The brain floats in a bath of cerebrospinal fluid, encased in the skull, like a buoy on a secluded lake. Its only contact with the outside world is through neuronal spikes, streams of electrical pulses sent from nerves in the body. At any given moment, spikes flow through the brain in a kind of Morse code symphony. In Inside Out, Buzsáki’s driving question is: how do these streams of neuronal spikes become meaningful to the brain? How does it map them onto real things in the world, not to mention thoughts conjured in the mind?

For many neuro fans, Inside Out is a long-awaited sequel to Buzsáki’s 2006 book, Rhythms of the Brain. Rhythms was that rare breed of pop science book that was as exciting for neuroscientists as for the general public. I’ve seen it on the shelves of many of my colleagues (it’s on mine, too). Both books have scholarly rigor, but also a knack for telling stories about ideas. And they are both structured like two books in one, with the primary narrative in the main text, and technical details, references, and fascinating nuggets of information in extensive footnotes. Like Rhythms, Inside Out offers crossover appeal, but it is unabashedly broad and ambitious, aspiring to articulate a philosophy of how to think about the brain that shapes the future of neuroscience research.

In Inside Out, Buzsáki, the Biggs Professor of Neuroscience at New York University School of Medicine, tackles neuronal coding, a central concern of the field. He crystallizes an important distinction, sometimes lost in the current practice of neuroscience, between what is meaningful to the scientist observing the brain – the “outside-in” perspective – and what is meaningful to the brain itself – “inside-out.” Buzsáki describes these two approaches to understanding the brain, arguing that the inside-out approach is the way forward. He then applies this approach to a vast territory of neuroscience, from how the brain handles space and time to how we use technology to externalize thought.

In the outside-in approach, the brain is a passive receiver and interpreter of the outside world. Scientists, in turn, aim to relate neural activity to external stimuli. The modern pioneers of this strategy are David Hubel and Thorsten Wiesel who, starting in the 1950s, recorded the electrical activity of neurons in a cat’s visual cortex while showing the cat slides on a projector. Neuroscience lore has it that the researchers couldn’t figure out what would make the neurons respond until by chance they noticed a burst of spikes from a neuron as they were removing a slide from the projector. It turned out that the neuron responded to the moving edge of the slide.1 This discovery jumpstarted a research effort that remains strong today: measuring which stimuli in the world are associated with which neural responses in the brain.

The outside-in approach has had clear successes. Neuroscientists are amassing increasingly detailed knowledge of how our sight, hearing, touch, and physical movements map onto activity in different areas in the brain. This knowledge is already being put to use in neuroprosthetics – brain-computer interfaces that can help restore vision in blind people, and help paralyzed people communicate. In a study reported in Nature this spring, researchers synthesized artificial speech from brain signals related to mouth movements2, a step toward synthesizing speech from imagined talking alone.

But what is the stimulus for a thought? For a memory, a doubt, a musing? As one of the leading scientists studying the hippocampus – a deep brain structure important for memory and navigation – Buzsáki has faced this problem for decades. It has led him to the inside-out approach, where the brain is an active explorer of the world rather than a passive interpreter. In his view, scientists should aim to understand brain activity – its patterns and principles – without immediate reference to the outside world. “The brain,” Buzsáki writes, “should be treated as an independent variable because behavior and cognition depend on brain activity, not the other way around.”

Active exploration means that the brain is anything but a piece of “blank paper” waiting for the pen of experience. (Among the many charming things about this book is Buzsáki’s diligence in using common language for technical concepts – even “blank paper” instead of “blank slate.”)

The brain spontaneously generates extended, organized sequences of neural activity. Buzsáki suggests that such sequences serve as a vast reservoir of neural patterns to which different experiences can be attached – like a dictionary of nonsense words that gradually get defined. This process may play out almost literally in the babbling of babies, when they spontaneously generate structured sequences of sounds. “When the uttered sounds resemble a particular word, the happy parents regard them as a real word. They reinforce such spontaneous utterances with a corresponding object, action, or phenomenon, until it acquires a meaning for the baby.”

In Buzsáki’s own lab, experiments with rats have shown how neuronal sequences support memory and planning. When a rat enters a new environment, neurons dubbed “place cells” respond when the rat is in specific spatial locations. When the rat runs a maze, place cells fire in sequence, with different sequences for different paths through the maze. When rats had to pause in a running wheel between maze runs, the place cells previewed the path through the maze it planned to run next.3 “Such self-organized activity,” writes Buzsáki, “is the source of perhaps all cognitive operations, including memory, reasoning, planning, decision-making, and thinking.”

For this active explorer brain, our interaction with the world is critical even for the seemingly passive process of perception. “The only way we can learn that sticks that ‘look bent’ in water are not really broken is to touch and move them,” Buzsáki writes. Sensory neural activity is tied to something meaningful in the world when it’s yoked – inside-out – to an action, like reaching out a hand or moving the eyes. The way we perceive the world, even at a basic level, may be actively shaped by how we engage with it.

One gets the feeling that Buzsáki poured all the ideas he’s been brewing from as far back as those early ham radio days into Inside Out. The result is a book that has a single big vision of neuroscience and is packed to the gills with particulars. It is wide-ranging – from the philosophy of causation to Mongol mounted archers – and exuberant: a Midnight’s Children of a science book. It will fuel the imaginations of young neuroscientists, as they invent new ways to understand the strange and wonderful meat inside our heads. As Buzsáki reminds us, meaning is not given but made.

Rachel Denison, Ph.D., is a postdoctoral scientist in the Department of Psychology and Center for Neural Science at New York University. She studies visual perception, attention, and decision making.