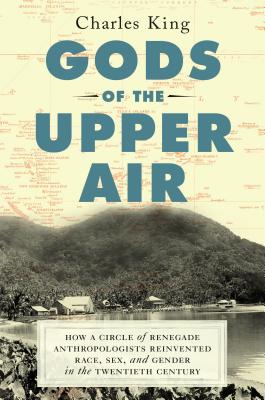 Gods of the Upper Air

How a Circle of Renegade Anthropologists Reinvented Race, Sex, and Gender in the Twentieth Century

“The real voyage of discovery consists not in seeking new landscapes, but in having new eyes.”  (Marcel Proust)

Charles King’s new book Gods of the Upper Air tells the story of story of how social scientists in the first half of the 20th century found “new eyes”—or at least new glasses—through which to see other cultures, revolutionizing anthropology and creating sociological ripples that remain too this day. Gods of the Upper Air is about the birth of “cultural relativism,” a school of anthropology born in the United States that centers around the idea that a person’s actions and thoughts should only be evaluated through that person’s cultural lens.

King takes the same approach: In loose chronological order, with each chapter focusing on a central person or theme, he lets his readers experience the first steps and coming of age of cultural relativism through the stories of its mothers and fathers, emphasizing their personal struggles and diverse backgrounds. He whirls us away to the Samoan islands with bisexual Margaret Mead; we observe zombies in Haiti with African-American Zora Neale Hurston; we track the practice of gender crossing among the Native American Zuñi, with former housewife Ruth Benedict.

Looming over all of them is their mentor, Franz “Papa” Boas, a German-born American, who upended the anthropological scene in the United States by challenging its views on set cultural hierarchies. In one of the book’s key moments, Boas, who had collected cranial measurements of different people, realizes that there is no data-based justification for a scientific definition of “race.” That was over 100 years ago, but the existence of “races” has remained an issue of debate even today. Only last year, German scientists felt compelled to answer this question once and for all, by stating in the Jena Declaration that “The concept of race is the result of racism, not its prerequisite.”

Race is a central topic in God of the Upper Air; and is also a recurring theme in King’s other articles and commentary. King, like Boas, argues data on measurable characteristics contradict any attempts to define racial categories: there is bound to be more variation within categories than across. Free of the confinement of categorization and hierarchy, one can then understand people and their cultures on their own terms.

An avid history communicator, King is a professor of international affairs and government at Georgetown University. Gods of the Upper Air is his seventh book, and most of his other books concern themselves with the history of countries in Eastern Europe and Western Asia. His ability to translate good scholarship into accessible storytelling manifests itself in remarkably thorough historical research and in solid, enjoyable prose. There are some bumpy parts at the beginning of the book, though, which felt to me slightly condescending. King states, for instance, that Boas “had been bored by his research as most dissertation writers eventually are” or talks about “a relatively backward place like Minden.” Most of the time though the book is engaging, and at times I even caught myself laughing out loud, as when King quotes Margaret Mead complaining that “Marriage is like the New York subways. You have to get on a train to find out if you’re on the wrong train.”

Margaret Mead’s bestseller Coming of Age in Samoa, which features prominently in King’s book and is based on her research about the sexual life of adolescent girls in Samoa, remains one of the most widely read, but also controversial, books in the social sciences. It raises fundamental questions about how to obtain objective data, when your goal is to view the world through someone else’s –by necessity subjective–eyes. This type of research poses a conundrum, because the data depends not only on whom you ask and who does the asking, the answers are fluid and change with time. King’s book tells the tale of how cultural relativism was born out of the desire of a few to solve this unsolvable puzzle, to both take a step back and view the world from “the upper air,” while at the same time stand right in the middle and be part of it.

In addition to Mead, a diverse cast of female scientists take center stage in Gods of the Upper Air. Set at a time when women in the US had just been given the right to vote, it was inspiring to learn how Ruth Benedict became a transformative figure in anthropology and Columbia’s first female full professor in the social sciences. As a woman in science in a male-dominated field, I was surprised and thrilled by how instrumental women were in the shaping of the central ideas of cultural relativism. A moment later I felt ashamed at my own surprise. After all, isn’t it obvious that members of underrepresented groups should be the ones to appreciate a new, non-majority viewpoint the most?

At the book’s beginning, King claims that he doesn’t mean it to be a “lesson in tolerance.” While it might not be a lesson, it most certainly is a plea. At the end of the book he expresses his belief that we are “still tempted by the desire to root our own society-bound prejudices in something allegedly deeper than our own collective imagination” and sees this as evidence how relevant the Boas circle’s ideas remain. I agree: If everyone took a page out of the book of cultural relativism and tried to see the world through other eyes—of political opponents, of people from other countries, or even of the people who live next door—we’d most likely live in a more peaceful and less polarized world. King hints at these contemporary implications — for example he mentions Trump’s “Mexicans are rapists” comment –but other than that he stays away from any political positioning.

Gods of the Upper Air will come as no revelation to social scientists. In fact, a friend who is a social scientist herself raised an eyebrow at my awakened enthusiasm for cultural relativism. Many of its more controversial implications for contemporary debates, like “nature versus nurture” or the question of whether human rights are “culturally relative,” are not touched upon in the book. However, non-experts with an interest in anthropology as well those who are tired of reading of the scientific achievements of male, white Westerners will find the book engaging, touching and thought-provoking.

For me the book’s takeaway, while politically relevant, is also very personal. One of its central messages is to get out of your cultural comfort zone, even if this is difficult or upsetting, because the reward is to “get smarter – about the world, about humanity.” I felt inspired to follow Margaret Mead’s advice to “launch your canoe into the world, throw yourself into an unfamiliar setting”, even if it takes, as she wrote, “some hard rowing before you get to someone else’s hut.”

Angelika Manhart is a Lecturer of Applied Mathematics at University College London. She has tried to collect her own set of “new glasses” by living in Australia, Uganda, Europe and the US, but feels she still has a long way to go in combatting her chronic near-sightedness.