Into The Coding Room 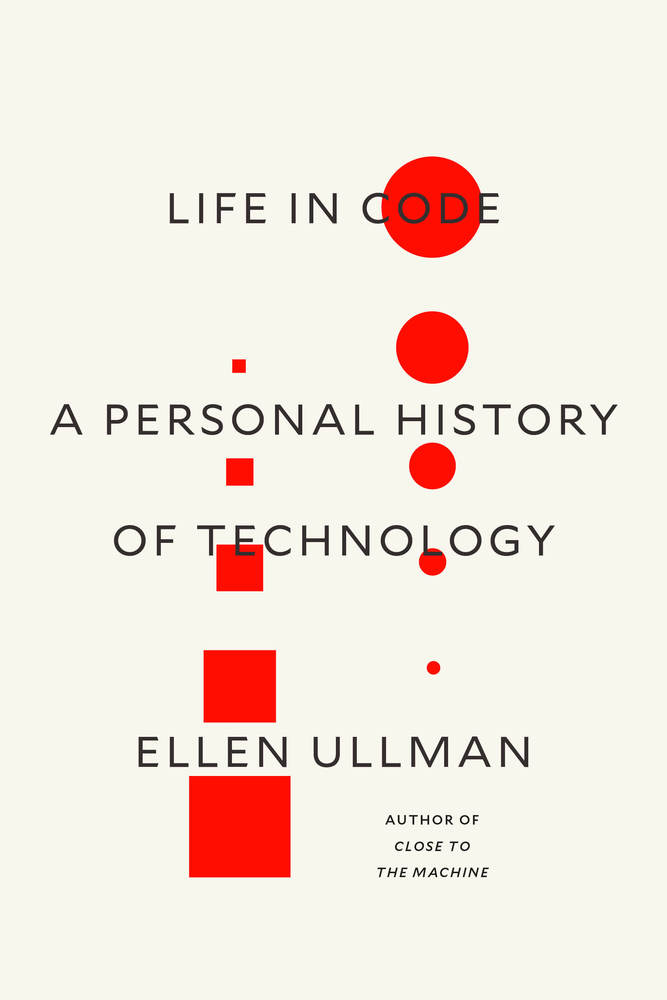 A Personal History of Technology

In 1979, Ellen Ullman bought a personal microcomputer called the TRS-80. It was an impulse buy. She had to teach herself to program it. Fortunately, inexperience was not a problem at the time: computing had become ubiquitous in San Francisco and every business needed programmers.

“I had written code; I needed a job; I got a job,” recalls Ullman.

Ullman worked as a software engineer and consultant for two decades, beginning in the 1980’s. In the early 2000’s, in the aftermath of the internet boom, Ullman left her job as an engineer and became a full-time writer. As the title of her earlier book Close to the Machine: Technophilia and Its Discontents suggests, she has had a long-standing love-hate relationship with technology. She loves the beauty of writing code, but has become increasingly distressed by what technology has wrought.

In Life in Code: a Personal History of Technology, Ullman has gathered a selection of essays from two periods of her life. The first two-thirds of the book are pieces written between 1994 and 2004, including articles originally published in Harper’s Magazine, Salon, and Wired. The last third comprises newer work written from 2012 to early 2017. The compilation works. It shows Ullman’s changing views on the social and political impact of technology through the years. “Through it all,” she writes, “I embraced the new technologies as they emerged but looked at them with a gimlet eye. I could not succumb to believing in the ultimate goodness of technology; something kept me from the dizzy addiction.”

Life in Code reads at first like a conglomeration of clever and compelling anecdotes about the last 20 years of technology. It is not until later in the book that we learn the true purpose of the stories: to open the door to the coding rooms and “break into the closed society where code gets written.”

The early essays in the book reflect on the Silicon Valley of the 1990’s. Buildings fill up with cutting-edge desktops and monitors. Inside them, programmers work on their computers in silence. Any distraction can cause a bug, a malfunction, a glitch. Their objective is to get the code to work, to work! They can’t stop until it does. (As a longtime coder myself, I immediately recognized this sensibility. To stop coding, I would need to be aware of time passing, notice the people coming and going, feel hunger, thirst, or pain; but I mute everything. Everything but the code.) As Ullman writes in the first pages of the book, “Programming is like an illness, a fever, an obsession.”

During this first era of programming, hordes of engineers (“overwhelmingly male, white and Asian”) overflow the offices and pour into the streets of San Francisco. Cafes and bars are crowded with CEOs and entrepreneurs. The construction of new buildings is rampant; the “horizon is broken by cranes in all directions, giving their finger to the sky.” (At this point in the book, I forgot Ullman was describing the first internet boom. The scenes are unnervingly similar to the San Francisco I worked in during 2011-13. The only thing suggesting the earlier era is the mention of Yahoo.)

The internet, argues Ullman in a 1998 essay, was irrevocably damaged when it commercialized. She is referring to the origins of online shopping, ongoing at the time. Before its existence, producers needed agents, brokers, and other middlemen to help sell their products. Online, they could sell to consumers directly, removing the middlemen and reducing costs. To promote this new way of shopping, manufacturers spread the idea that intermediate experts were unreliable, uninformed, and overall unnecessary. (You can’t trust them. Trust yourself. Buy online!) The pitch was successful, and it helped glorify self-service, individualism, and isolation. We removed ourselves from society, claims Ullman, and abandoned the rituals of shared experiences that sustain community and culture.

Although the internet today is all about social networking, the experience online remains profoundly personalized: your Facebook, your Twitter, your Instagram, all tailored to your interests. Ullman explains that, as each individual reads only “those websites that reinforce his or her desired beliefs,” we have moved over time from isolation to radicalization, from a network of expert knowledge to a network of lies. “In two decades,” she laments, “the tendency to dismiss intermediaries has come to ground, at the feet of Donald J. Trump.”

I wonder if artificial intelligence is the next step on this path?

A month ago, I read an article in the MIT Technology Review entitled “A New Algorithm Can Spot Pneumonia Better Than a Radiologist.” It is not the first article to use the formula “AI beats [expert] at [expertise].” In fact, I’ve read many articles with the same underlying message: artificial intelligence can do better than human experts. The pitch is similar to that of 1998 but, instead of glorifying the individual, we mock human intelligence while praising technology.

“We are becoming [robots],” notes Ullman. We communicate through bits and bytes. Electrical signals that our bodies can’t comprehend. Smiles. Laughter. Anger. ¯\_(ツ)_/¯. We’ve standardized emotions to translate them into something the computer can understand. Our social lives are mediated by computers, chaperoned by companies. Our memories are saved forever, copied from database to database; held and sold by corporations.

“I knew years ago that technology would intrude into the intimacies of our lives,” Ullman writes. “But I could not know that so many people would be delighted at that changed state of existence.”

Despite Ullman’s apprehension of technology (or maybe because of it), she issues a call to arms to everyone: learn to code. “Come in,” she exhorts, “fill the ranks, understand that the beauty in logic is as powerful as the beauty in any creative human endeavor.” She wants us to learn that programs are faulty, that code is biased, that machines are not scary. She wants to demystify computing. And the best way to do that, she believes, is to “Open the door to the coding room.”

Francisca Gil is a Chilean computer scientist, ex-Silicon Valley engineer, and current Ph.D. student at New York University. She has no intention of changing the world.