Is Immortality All It’s Cracked Up To Be? 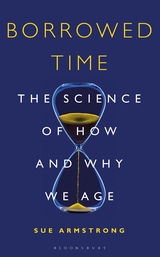 The Science of How and Why We Age

The dream of immortality is as old as humankind. Nobody wants to die, and most of us think we want to live forever. But do we really? What is an endless life worth when you are not healthy enough to enjoy it?

In aging research, lifespan and healthspan are two very different concepts. An extended lifespan means that you gain additional years of life – but that doesn’t tell you anything about the quality of those years. An extended healthspan does not add years to your clock but allows you to stay healthy and enjoy the rest of your life without restrictions.

Sue Armstrong, a science writer whose previous books include p53: The Gene that Cracked the Cancer Code, focuses on the prospect of increasing healthspan rather than lifespan as a starting point for her new book Borrowed Time: The Science Of How And Why We Age.

Armstrong is in her late sixties and “still swimming happily in the mainstream of life.” But– as many of us do sooner or later – she has watched her mother “lose her sight, her hearing, her beloved partner and most of her friends, and finally her mind.”

But the “quest for ‘immortal life’” promoted by some researchers is in Armstrong’s eyes (and I agree) “exasperatingly narcissistic.” In fact, it almost made her give up on writing her book at an early stage. She persisted despite her initial misgivings and after sharing “a good laugh” with a few down-to-earth scientists she found her faith again. But her early exasperation colors the book she wrote. Be prepared: If you’re looking for a collection of advice on how to double your lifespan, you’ll be disappointed. That’s not what this book is about.

In Borrowed Time, Armstrong deftly summarizes the current areas of interest in gerontobiology (the biology of aging): telomeres, the protective caps on our genes that act as cells’ internal clocks; the influence of our genes and environmental factors on how we age; the role of our immune system and self-renewing stem cells.

Scientists have turned to nature in hopes of finding a cure for aging, and Borrowed Time is full of fascinating animal anecdotes. A jellyfish in the Mediterranean Sea is the first immortal animal discovered on Earth. It can switch back and forth between its adult and juvenile stage, and only seems to die when swallowed by a bigger fish, but never from old age. The long-lived “ocean quahog” is a cold-water clam that reaches the incredible age of more than 400 years.

But Armstrong also acquaints the reader with the more common model species used in aging research, like mice and fruit flies. She also poignantly recounts the stories of patients suffering from premature aging conditions, and in the last few chapters of the book, she tackles “one of the most feared aspects of growing old”—Alzheimer’s disease and dementia.

“Nature’s solution” to the constant “insults and injuries of daily living” is “to replace worn-out bodies with new, undamaged ones,” Armstrong writes of one of the earliest modern theories of aging, circa 1889. Almost a hundred years later, the English mathematician-turned-biologist Tom Kirkwood realized how the cells in his culture dishes inevitably died after some time, and refined this theory. Our egg and sperm cells are kept immortal, but all other cells in our bodies gradually age “as a result of lack of investment in maintenance machinery.” Together, those early theories give a first idea of why we age.

Telomeres are one cellular maintenance mechanism — and one of the most fascinating areas of aging research. These structures sit at the end of our chromosomes, shielding our DNA like a protective cap at the end of a shoelace. When this cap is lost, the lace (our DNA) will fray and become non-functional. Telomerase, the enzyme that restores telomeres, is only active in germ cells (eggs and sperm) and stem cells – the cells that stay immortal. In our other cells, the lack of this enzyme allows only a limited number of cell divisions before the chromosome ends become too frayed, and the cell stops dividing, becoming “senescent.”

Telomere damage and cell senescence are among several “hallmarks of aging,” compiled by researchers in 2013 to describe what happens when we age. In a nutshell, our bodies accumulate damage, are less efficient in generating energy from nutrients, and cannot clear up harmful cellular debris as well as a young body can.

The challenge for gerontobiology is to unravel how our bodies reach that stage and to find ways to counteract it.

Armstrong’s simple yet engaging prose is targeted at all readers with an interest in biological details. Short, well-connected chapters make the content easy to digest. Most of the time, her narrative is coherent, and the underlying science is carefully explained in layman’s terms. And though she touches on promising study results, she never glorifies them, emphasizing that “there have been – and still are – many wrinkles to iron out.”

Anecdotes of and interviews with key scientists draw a vivid picture not only of their work but of the scientific process itself. Their “aha” moments – such as Tom Kirkwood coming up with his theory of aging while having a hot bath on a February night – add a personal dimension to the science, making the book both entertaining and credible.

Alzheimer’s disease is one of the book’s main topics — and one of the most well-studied aspects of aging. A more recent and novel focus of Alzheimer’s research Armstrong describes is on fine particle pollutants in the air that we breathe. More than 90% of the world’s population lives in areas where air pollution exceeds the limits set by the World Health Organization (according to the Organization’s website). Known consequences include an increased risk of cardiovascular and respiratory diseases, and cancer. But according to Armstrong, new studies show that especially in people carrying one of the Alzheimer-associated gene mutations, the disease starts earlier and more frequently among those who live in polluted regions.

Often called the “graveyard of hopes,” research into Alzheimer’s disease is challenging. Big Pharma has been discouraged by the rare success of studies, and has abandoned further research to pursue more profitable markets. The discovery of environmental causes that can drive Alzheimer’s disease onset – especially those that a large majority of humankind is exposed to – might help to change this.

Another potential paradigm shift is the hypothesis that Alzheimer’s disease and dementia are not neurodegenerative diseases, but “systemic problems with neurological read-outs – they’re not isolated brain problems.” As such, aging symptoms should be treated with a more holistic therapy approach. Some scientists are even looking into the benefits of Ayurvedic medicine, one of the world’s oldest medical systems that originated in India.

But how likely are we to attain healthy aging? Increased length and quality of life can be achieved in lab animals, but Armstrong emphasizes at several points that “there is an immensely long and rocky road between exciting results in the lab and something in the medicine cupboard we humans can take to keep us healthy or make us better.” Dietary restriction, frequent exercise, or mind-challenging games are familiar recommendations for healthy life – affecting not only how we age, but also the quality of our (younger) lives. More radical ideas suggest taking out a person’s cells, turning them into stem cells, and putting them back into the body, or transfusing young blood into elderly people.

Such ideas, Armstrong contends, should not be rushed into a therapy. Her cautions were vindicated by a recent example. A biotech startup – after encouraging results in mouse experiments –started to offer blood plasma transfusions from young donors to treat aging. Earlier this year, they had to discontinue this program after the Food and Drug Administration released a warning that there is no proven benefit of this therapy, but a risk of side effects like serious allergic reactions or an overload of the circulatory system.

Borrowed Time offers a refreshingly sober take on the current status of aging research, explaining the underlying science in an entertaining way for both scientists and non-scientists. It also drives home the fact that anti-aging researchers (and researchers in general) are burdened with huge expectations. The science is progressing. But it proceeds, as always, in incremental steps.

Vanessa Kellner works as a postdoctoral fellow at New York University. A molecular biologist by training, she wants to understand the details of DNA maintenance mechanisms. In her free time, she enjoys wandering around the city or attending concerts and sports events.