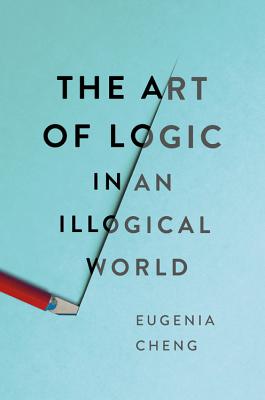 The Art of Logic in an Illogical World

Is logic dead? In this “post-truth” era, emotions are often used as a substitute for facts. We are neck-deep in fake news, echo-chambers and divisiveness. Is there still hope for meaningful conversations among people with different opinions?

Writer and mathematician Eugenia Cheng thinks so. Logic, she says, is a lifeboat for anyone drowning in the illogical world—or it can be used just to argue about global warming with your uncle without ruining Thanksgiving dinner. Her wide-ranging new book, The Art of Logic in an Illogical World, roves from memes and mathematical paradoxes to Obamacare and Black Lives Matter. The book also takes a radical approach: using emotions in conjunction with logic to make arguments more persuasive.

Cheng got her Ph.D. in mathematics at the University of Cambridge and is currently a scientist-in-residence at the School of the Art Institute of Chicago. Drawing parallels from arcane mathematical concepts to cooking recipes in her previous highly acclaimed book, How to Bake Pi, Cheng has proved her prowess for making technical concepts palatableto non-experts.

“Mathematicians are surprisingly good at convincing each other using logical arguments,” says Cheng. But laypeople can also wield the tools of mathematical logic to find common ground in social situations. While studying math in school, we all learn to use simple yet extremely powerful logical tools like understanding when two situations that seem different are actually the same (equivalence), drawing links between two disparate ideas (analogy), and extracting underlying concepts from real world objects (abstraction). If you have a banana and an apple, for example, what is the total number of fruits you’ve got? Using logic has become so second-nature that you don’t even realize that you are using analogy and abstraction when answering the question. Unfortunately, we learn to use these tools only within a limited mathematical context and fail miserably when applying them to the real world.

Cheng surprised me by invoking sensitive topics from today’s contentious politics while explaining these seemingly mundane logical tools. To explain false equivalence, she talks about people thinking that “the existence of super-rich black sports stars means that white privilege doesn’t exist.” A fallacy in using the concept of logical equivalence, she writes, is “people supporting the ‘Affordable Care Act’ and opposing Obamacare.” And her example of a false dichotomy is people refuting ‘Black Lives Matter’ by saying ‘All Lives Matter.’ At one moment she talks about circular reasoning in logic and the next moment she is discussing police brutality against African-Americans in the US. “If you aspire to be a tolerant human being,” asks Cheng, invoking an analogy of a mathematical paradox, “does that mean you have to tolerate hateful and intolerant views?”

You might think this is exactly what you don’t need: yet another nerdy scientist droning on about logic being the panacea for every problem that plagues us. But you’d be wrong. In almost half the book, Cheng points out the limitations of applying logical tools to the everyday world: the dangerous oversimplifications people make when they try to be logical.

“Logic pushes us to black and white extremes if we’re not careful,” she notes, urging us to acknowledge that most social areas are gray, before taking sides. Many of us, for example ,believe in a dichotomy when it comes to privilege: either a person is privileged or they’re not. But in reality, Cheng says, “almost all people are more privileged in some ways and less privileged in others.”

Being a pedantic scientist, I frequently fall into the trap of expecting definitive answers. But these are hardly ever available when dealing with social issues, which are too nuanced to be definitively resolved. And while people with differing opinions often yell “You’re being illogical!” to shut down debates, Cheng points out that people can logically reach different conclusions if they start with different core beliefs. Logic also cannot help us in a situation where the available evidence is insufficient. Some people see all these limitations and conclude that they don’t need to use logic at all. To Cheng, this sounds like “throwing away a bicycle because it cannot fly.”

Although Cheng teaches us to look at social issues from a new perspective of logical tools, she fails to follow up on how exactly such a perspective helps in resolving those issues, especially when people behave in an illogical way. She seems concerned only about the “Art of Logic” part of the title in the initial 250 or so pages and ignores the “Illogical World” part (which motivated the book in the first place) till the remaining 40. I wish she had dug further into her claim that using logical tools make it easier to spot inconsistencies in our arguments and help untangle intricate social issues.Furthermore, the booklacks structure, and tends to meander. Cheng introduces the same logical concepts multiple times, talking about analogies in five different chapters, all of which sound quite — well — analogous.

In the final part of the book, Cheng finally gets to the question that the book claims to address: how to persuade people who aren’t convinced by evidence and logic? Does ice-cold logic actually help? Should we engage them with emotions alone? Philosophers have grappled for centuries with the dichotomy between logic and emotions, which Plato himself described as two horses pulling us in opposite directions.

Cheng takes the radical stance that instead of pitting logic and emotions against each other, we can use them in tandem when dealing with social issues. She argues that “to persuade white women to care more about racism, one might make the analogy to sexism and try to wake up emotions that way.” For a person in an evidence-based profession like me, it is quite vexing when evidence and logic alone aren’t sufficient to change people’s minds. I am alarmed when some parents decide not to vaccinate their children because they “feel” vaccines cause autism or when people “feel” that evolution is a hoax instead of looking at the scientific evidence.

Cheng acknowledges the immense power that emotions have on people and she advises that it is incumbent on rational people to invoke emotional means to bolster their logical arguments. Rather than considering emotions as a limitation, I now think about ways to use emotions as an aid in conveying logic and evidence in a more engaging way. To awaken public empathy towards Syrian refugees, for example, bombarding people with dry facts about the number of refugees who died fleeing Syria was nowhere near as evocative as a single photograph showing a three year old Syrian boy, Alan Kurdi, washed up dead on a Turkish beach.

I wish Cheng had dug further into using emotions alongside logic, especially how to use rationality to guide our emotional response and how to guard against divisive emotional manipulation. But overall, The Art of Logic’s approach is both interesting and novel, even if it comes up a bit short on concrete tools for using logic and feelings in tandem. It could save you from feeling helpless in our divisive echo-chambers or it could just provide an essential recipe for a peaceful Thanksgiving dinner: a way to discuss global warming with your uncle without ending up hurling turkey legs at each other across the dinner table.

Digvijay (Jay) Wadekar is pursuing his Ph.D. in Astrophysics at the Center for Cosmology and Particle Physics at NYU. He also enjoys forays into the illogical areas of the social world from time to time.