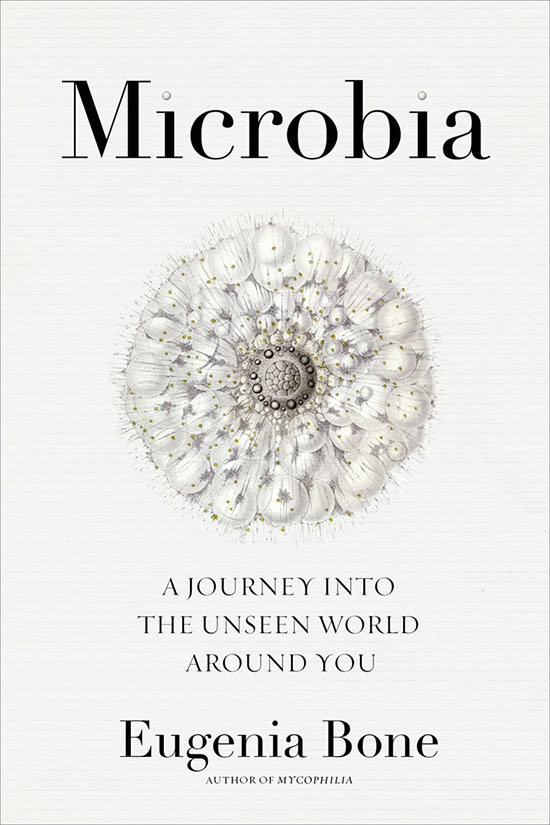 A Journey into the Unseen World Around You

We have entered an age of germophobia and microbiomania. Headlines terrify with tales of bubonic plague on the subway, while touting the panacean properties of probiotics and fecal transplants. Amid the din of fear-mongering and million-dollar marketing campaigns, Eugenia Bone offers a voice of reason. She acknowledges that we have “a love-hate relationship with microbes.” But rather than choose a side, she argues, “Our relationship with microbes includes it all, from the most devastating illnesses to the most miraculous-seeming cures. What needs to be teased out is the truth buried in the hype.”

In Microbia: A journey into the unseen world around you, Bone sets out to demystify microbiology so readers can appreciate the essential and intricate roles microbes play in our world, and be able to distinguish truth from exaggeration. To accomplish her mission, Bone goes back to her alma mater Columbia University at the age of 55 to study Ecology, Evolution, and Environmental Biology. Armed with a new understanding of microbiology, along with her preexisting wit, Bone conveys the beauty and richness of the microscopic world without all the alienating jargon that often –excuse the pun– plagues the topic.

Bone first became interested in microbiology through her love of fungi. She is the former president of the New York Mycological Society –a group of mushroom-lovers originally founded by the composer John Cage– and a prolific nature and food writer. She has authored six books, including Mycophilia, an exploration of the beautiful and bizarre roles mushrooms play in our society and environment.

Microbia is half biology, half biography: Bone weaves together her personal experience navigating academia, difficult scientific material, and astute observations about the science.

Bone charms us with tales of her trials and tribulations as a student the second time around. Some things have changed: students participate in online discussion forums, complete assignments on an online learning site, and master computer programs to make intricate graphs for their lab reports. Some things haven’t: the importance of exams, the test anxiety that inevitably accompanies them, and the unremitting university bureaucracy. While trying to navigate her way through some red tape, she remarks to the registrar: “This is infantilizing.” His response- “Yeah…” “College is like that.”

Bone also observes the essential role stimulants play in her fellow students’ lives– the large amounts of Red Bull consumed, the snaking lines at the campus Starbucks, and the popularity of ADHD medications such as Adderall and Focalin. Bone notes that one in six students at American universities used ADHD drugs in 2015 and that a 30-milligram dose of Adderall can be bought on a college campus for less than the price of a latte. She even gives one such study drug a try during an important exam. She spends the whole exam reciting the lyrics to the New York Mycological Society’s “Hymn to Mycology,” learning the hard way that while drugs might help you focus, you don’t always focus on the right thing.

As for the science, Bone deftly handles the jargon of microbiology, making it at once amusing and accessible. Glomulin, a sticky sugar found in soil, “[is] like the silicone you use to caulk your leaky shower.” When describing how plants provide sugar to soil microbes in exchange for help with their nutritional and defensive needs, she explains, “Soil is like Sweden. The plants pay a high tax but the state guarantees security.” On the universal nature of the microbiome, the author points out, “All plants and animals, from Iowa corn to Anderson Cooper, host microbes that do these two chores: processing nutrients and protecting the mother ship.”

As a microbiologist myself, I appreciate that Bone avoids many of the pitfalls made by the media when reporting discoveries in microbiome science, like hyping and overselling results. “Probiotics may do us a lot of good, or maybe they don’t matter much. The science is still being sorted out.” While this may make for a less sexy headline, the reader will be inclined to believe Bone when she discusses the epidemic of antibiotic overuse and warns of a post-antibiotic era. The CDC estimates that at least 23,000 people die from antibiotic resistant infection in the United States each year. “It’s higher elsewhere, and it is going to get higher everywhere,” she cautions.

While not necessarily a substitute for reading the actual science, Microbia synthesizes information from many expert sources to make Bone’s case that the soil microbiome is something that affects us all. Extensive use of synthetic fertilizers and pesticides decreases the microbial diversity in the plants and soil and “tanks the nutritional load of the plant.” Importantly, this has led to a “5 to 10 percent decrease in minerals in American-grown fruits and vegetables since World War II.”

In her search for the truth about microbes, Bone goes on the Microbiome Diet, which seems to be part common sense, part fad diet, and a whole lot of supplements. She gives a live-culture underarm deodorant a try, discussing the degree to which the cosmetics industry has embraced microbiomania. Bone even has her personal metagenome sequenced from a stool sample. She travels to the annual Prairie Festival in Kansas, which is part soil science seminar and part gala, to the Iowa State Fair for a celebration of corn, and to the American Society for Microbiology’s Microbe conference.

Bone’s self-experimentation is more for fun than utility. We learn that while the underlying science is sound and fascinating, there is still so much left to understand. It’s unlikely readers will be moved to make any big changes to their diet or personal hygiene, but they will certainly look at synthetic fertilizers and antibiotics differently.

As Bone makes clear, microbes are involved in almost every aspect of life on Earth, from populating the soil and affecting food supply and nutrition, to the “vaginome” transferred to us during birth, which ultimately determines our gut microbiomes. Our microbiomes are also influenced by our communities and who we interact with as shown by studies like the one on holy water sampled from basins outside of Catholic churches in New York City, or the one on the difference in skin microbiomes between two roller derby teams, before and after a match. We have many opportunities to share our microbes. As Bone notes, “eighty million bacteria can be shared in a 10-second French kiss….”

If one’s quest is to understand the science behind soil and human microbiomes in exquisite detail, there are certainly other sources to consult. But what makes Bone’s Microbia so important is the accessible explanation of the significance of microbes, and her personal journey to disentangle science from hyperbole. She reveals a truth that is perhaps intuitive, and certainly underappreciated, that microbes “are our ancestors, and our most intimate companions, and they permeate and link all life on earth.”

Alexandra Grote is a microbe enthusiast and a Ph.D. candidate at NYU’s Department of Biology, where she studies parasitic nematodes.