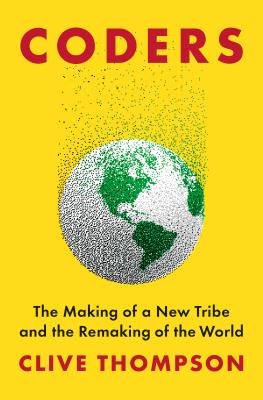 “Hello, world!” says the computer. In white text on a black screen, it springs to life and slavishly fulfills, to the letter, the will of its master – the Coder.

“Hello, world!” is the first line typed by almost every newly minted computer programmer, who suddenly possesses the intoxicating power of creation. Incredible possibilities exist in this world of code: physical distance becomes meaningless, communication is instantaneous, and new online communities bring us all together. But “Hello, world!” has a dark side, too: the unintended, Frankensteinian consequences that ensue when a group of young white men bring into existence their own limited vision in a complex, diverse world.

In Coders: The Making Of A New Tribe And The Remaking Of The World, renowned tech journalist Clive Thompson invites us to join him on an expansive, incisive exploration of the code that has changed the way we live, the humans who have written it, and the tech industry they have built.

In take-no-prisoners fashion, Thompson lambastes the failings of university computer science departments, the myth of meritocracy central to the psychology of coders, and the corporate culture of Silicon Valley.

Where did it all go wrong? Facebook hoped to “unlock… a flow of positivity” with the “Like” button, but instead created “our generation’s crack cocaine,” as one programmer puts it. Online free speech was hijacked by the coordinated campaigns of fringe groups to “dogpile,” “dox,” and silence individual voices on Twitter. Misinformation campaigns by foreign governments manipulated American voters in the lead-up to the 2016 presidential election, the effects of which continue to ripple through society today.

What do these examples have in common? Thompson argues that the lack of diversity in the tech industry has created monstrous blind spots. The “move fast, break things” ethos of Mark Zuckerberg and Silicon Valley, combined with the mostly white and male community of software developers, created a ticking time bomb. We are just beginning to understand the consequences of so many broken things.

Thompson explores the history of computer science from its beginnings in the 1950’s up to the current day. He tells us how computers work, explains the act of coding itself, and the psychology of those drawn to programming. As a computational biologist who spends most of my day coding, I found these information-packed chapters fascinating and illuminating, although non-coders may find them slow-going and irrelevant to the overarching point of the book.

But Thompson’s writing shines when he walks us through the history of the computer science field. In 1960, only 3% of lawyers, 7% of physicians and 28% of biologists were women. By the 2010s, these groups had significantly diversified, and women made up 33%, 36% and 53% of these respective work forces. The trend in computer science was reversed: in the early days of computer science (1960), 27% of women were programmers. By 2010, this number had dropped to 17.6%. Thompson explains how educational policies in the 1980’s, the unconscious gender bias of parents toward their children, and the politics of wealth and class have cumulatively contributed to this disturbing de-diversification of the tech industry. Here, Coders has a blind spot of its own: I would have liked to hear more about why black, Latinx, and LGBT coders are similarly so underrepresented in Silicon Valley (though Thompson does touch briefly on this point). By giving these other groups short shrift, Thompson leaves us wondering whether there simply aren’t enough data to tell their stories or whether Thompson himself falls into a trap of believing all underrepresented groups share the same story.

The lack of diversity in the trenches of software development is precisely why so many unintended scenarios have emerged over the past several years, Thompson argues. When a team of developers is largely white, male, young, and single, the team’s life experience and perspective are extremely limited. As Thompson notes, if there had been more people of color among its developers, more people who had personal experience dealing with racism and hate, Twitter would have likely foreseen the potential to use the platform to harass its members, and could have put safeguards in place to ensure that it would remain a safe online space.

The tech industry “monoculture” is founded on the belief that tech is a meritocracy: that the most talented programmers rise to the top. Thompson quickly debunks this as a myth. He paints a vivid picture of the hoops that programmers jump through on their way to coveted positions in the tech industry. One critical part of a coder’s CV is their GitHub, an online repository where they can show the world the code they have written, showcasing all the tricks in their arsenal. Thompson quotes Jonathan Nightingale, a former general manager for Firefox who put it particularly well: “Meritocracies say ‘your GitHub is your resumé,’ then they act surprised that their candidate pool doesn’t include a lot of single moms without time to hack on hobby projects.” Thompson argues that there is still an extremely narrow path of entry into the tech industry. And it is significantly easier for those coming through the gates of an elite computer science department.

But Coders is not just about the biases of the people who make up the tech industry. Thompson also explores some of the most advanced technologies they have created and their ramifications. In his chapter on artificial intelligence (AI), Thompson scared the pants off this reader by explaining “how exactly could a disembodied AI kill us.” Perhaps it is comforting that only 8% of AI experts think a super-intelligent machine that could destroy humanity is imminent, but Thompson’s description of nightmare scenarios resembling The Matrix and iRobot sound feasible with today’s technology.

More important, this chapter on AI illustrates how the very worst parts of humanity can spontaneously appear in the artificial intelligence systems that the tech industry has already begun to develop. Thompson explains how Google’s auto-complete tool in its search bar became racist and antisemitic (for example, completing the beginning of a search “are Jews…” as “are Jews murderers”). This example, along with others, demonstrates how racism can emerge in unexpected and unsettling ways from perfectly logical computer code: the data used to train this AI tool was mined from the internet, and contained terribly biased associations. Thompson reminds us that even the most subtle human intervention into the code that runs our lives must be scrutinized if we want to live in a society that not only functions efficiently but also honors the humanity of all cyber citizens.

Careful consideration of the possible consequences of their code is, of course, entirely at odds with the tech industry’s need for growth (and profit). But Thompson also offers recipes for change.

He suggests that solving the diversity crisis will have positive ripple effects that will organically render the internet a less toxic and dehumanizing milieu. He also persuasively makes the case that users should pay a subscription fee to use services like Facebook. On an economic level, the current business model of free social media platforms relies on ad revenue to meet their bottom line. The architecture of these platforms is designed to get the user to spend the maximum amount of time on their sites. If instead of the current model, users simply paid a fee, we could remove the perverse incentive for tech companies to prioritize addiction and compulsion over the health and wellbeing of their clients.

Coders shined a light on the many vague feelings of unease that I experience daily as a user of Instagram and a number of other online communities. And left me, as a coder, with a new sense of responsibility to make things better — and with an idea of how to get there.

Benjamin King, PhD, is a postdoctoral fellow at the Institute for Systems Genetics at NYU School of Medicine. He uses computers and code to study cancer and understand how it evolves resistance to chemotherapy.