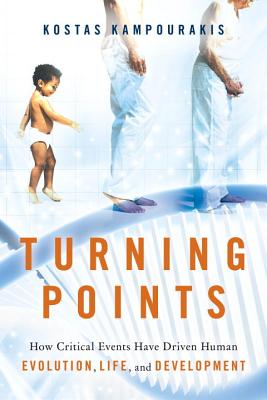 How Critical Events Have Driven Human Evolution, Life, and Development

Why do birds have wings? You’re probably thinking: “So they can fly, obviously.” But what about flightless birds like penguins or ostriches? Kostas Kampourakis provides a simple answer: “Birds have come to possess their features through evolution and are not intelligently designed.”

In his new book Turning Points: How Critical Events Have Driven Human Evolution, Life, and Development, Kampourakis, a researcher in science education at the University of Geneva, dismantles the “design stance” by providing scientific evidence that human beings and human lives are not the products of fate, destiny, or an omniscient God. While Kampourakis spends half of the book railing against creationism, he also provides an excellent introduction to genetics. For curious and open-minded science aficionados, Turning Points provides a roadmap for disentangling evolutionary biology’s most complicated concepts.

Kampourakis uses Charles Darwin as a case study in the role of chance. Would Darwin have published On the Origin of Species in 1859 if he hadn’t sailed to the Galapagos? Probably not. On a larger scale, Kampourakis points out that critical events in human history—like our transition to bipedalism and the development of bigger brains—might never have happened were it not for sheer dumb luck early in our evolution. At the end of the Cretaceous period, countless animal species—including dinosaurs—went extinct after an asteroid struck the Earth. The mammals of that era, defenseless mouse-like creatures, were finally able to explore and thrive in new ecological niches around the world. Tree-dwelling chimps, our closest kin in the animal world, went on to be particularly successful. “Our existence,” according to Kampourakis, “is a triumph of evolution.”

A staunch advocate for science literacy, Kampourakis uses Turning Points as a platform to highlight gaps in the public’s understanding of science. While I disagree with his methods—his tone can be pedantic and condescending—I agree that science communication warrants more attention from government officials and educators alike.

As a card-carrying evolutionary biologist, I was shocked to learn that 25% of people believe that the movement of stars and planets affects their lives, and 40% believe God created humans in their present form. This group includes members of my own family. Despite my best efforts, I never manage to change their minds. I wish Kampourakis had explored potential solutions to this problem—or used Turning Points as a first step in the process—rather than citing distressing statistics and counting on reforms in science education to trickle up to older generations.

While Kampourakis’ critical stance towards religion and astrology could alienate some readers (like your God-fearing grandmother), he doesn’t blame people for their beliefs. “Even nonreligious people”, Kampourakis maintains, “perceive purpose and design in nature.” In fact, this might be a fundamentally human trait.

Humans are natural storytellers, and we crave a good narrative. Our ancestors wove elaborate tales to explain the weather, the creation of our planet, and the existence of humanity. “Especially when we have no clues about what is going on, we intuitively think in terms of intentions, goals and design,” Kampourakis says. From an early age we are surrounded by artifacts—items that humans designed specifically to serve a purpose. Forks are for eating, chairs are for sitting, wings on an airplane are for flying. It’s no surprise that we attribute similar functions to objects in nature, like the wings of a bird. But “…despite superficial similarities, organisms and artifacts are very different.”

Biologists themselves are guilty of perceiving design in nature and are still learning to exercise restraint when appraising form and function. Take the unsolved mystery of Tyrannosaurus rex: why did the vicious predator have such diminutive forearms? Did they evolve to prop the animal up after a nap? To titillate female partners? While these ideas seem ridiculous, they’ve actually been suggested as possible explanations. Stephen Jay Gould and Richard Lewontin (Harvard professors of paleontology and genetics, respectively) challenged these “adaptionist” ideas in 1979. Gould and Lewontin argued that features of organisms are not always designed for a specific purpose, but are more often the outcome of historical or developmental constraints on the entire body. In the absence of any evidence, we can’t assume that T. rex’s tiny arms evolved for any particular reason.

While the many concepts discussed in Turning Points aren’t exactly novel—Gould, Lewontin, and Richard Dawkins have been expanding on them for decades—Kampourakis deserves credit for bringing underappreciated topics to a mainstream audience. I’m particularly excited that he described tumorigenesis as an evolutionary process (because cancer cells acquire mutations that provide them with a selective advantage, allowing them to divide uncontrollably), which will give many readers new insight into this disease.

Turning Points is Kampourakis’ third book, so it’s no surprise that he excels at communicating complicated scientific material: how genes are inherited, how DNA is repaired, and how genomic rearrangements can lead to both cancer and speciation. He even touches on gene duplications and deletions (a hot topic in biology today), demonstrating his knowledge of cutting edge science.

His anecdotes are punctuated with a witty sarcasm, which kept me interested despite my familiarity with the material. In one excellent analogy, Kampourakis describes how the same recipe can turn out differently for different cooks and in different kitchens. While genes and DNA provide some instruction, “the final outcome depends not only on them but also on developmental processes and on what happens during the implementation of those processes.”

Thus, according to Kampourakis, “Our fate is not prescribed in our genes.” While do-it-yourself genetic testing (à la 23andMe) has become trendier than buying kale, Kampourakis urges against buying into this “genetic determinism.” Nearly half of Americans believe that people are born homosexual, but is there really a “gay gene”? An “obesity gene”? A “liberal gene”?

Genes can account for variation in eye color, breast cancer risk, metabolic rate, and a variety of other traits, but they aren’t blueprints. This is particularly true for behavioral characteristics, which are influenced by multiple genes, developmental processes, and the environment.

We can gain important insights from dissecting the genetic basis of complex traits, but Kampourakis encourages a healthy skepticism—correlation does not equal causation— illustrating his point with an extreme example. In a 2015 study, Finnish scientists found that promiscuity in women (but not men, of course) could be attributed to genetic changes that alter how our brain cells receive the hormone vasopressin. An article with the alarming title “Infidelity Lurks in your Genes” appeared in the New York Times and included bold statements like: “sexual monogamy [for some] is an uphill battle against their own biology.” The media’s interpretation of the study is met with disdain from Kampourakis: “…Next time you meet a woman you like, you might arrange the first date at a genetics laboratory to find out if she carries the variants….”

This intersection between genetics, the media, and the public’s perception of science is increasingly important. Scientists should consider how their claims will be interpreted, and revise their language accordingly. Movies like Rampage—where biologists use the gene-editing technology CRISPR to engineer giant and aggressive animals—aren’t doing us any favors.

Whether you pray to an omniscient Creator or worship at the altar of Genomics, Turning Points prompts serious introspection. But how do we move forward as a society? Maybe reforming science education is the answer. Or maybe it’s in family conversations at the dinner table, or happy hour drinks with a co-worker. Thanks to Kampourakis and the other authors who bring these issues to the fore, we’re one step closer to aligning the way scientists and the public view evolution—and science as a whole.

Stephanie Lauer is a Ph.D. student at New York University where she performs real-time experimental evolution to understand how organisms adapt under stressful conditions.