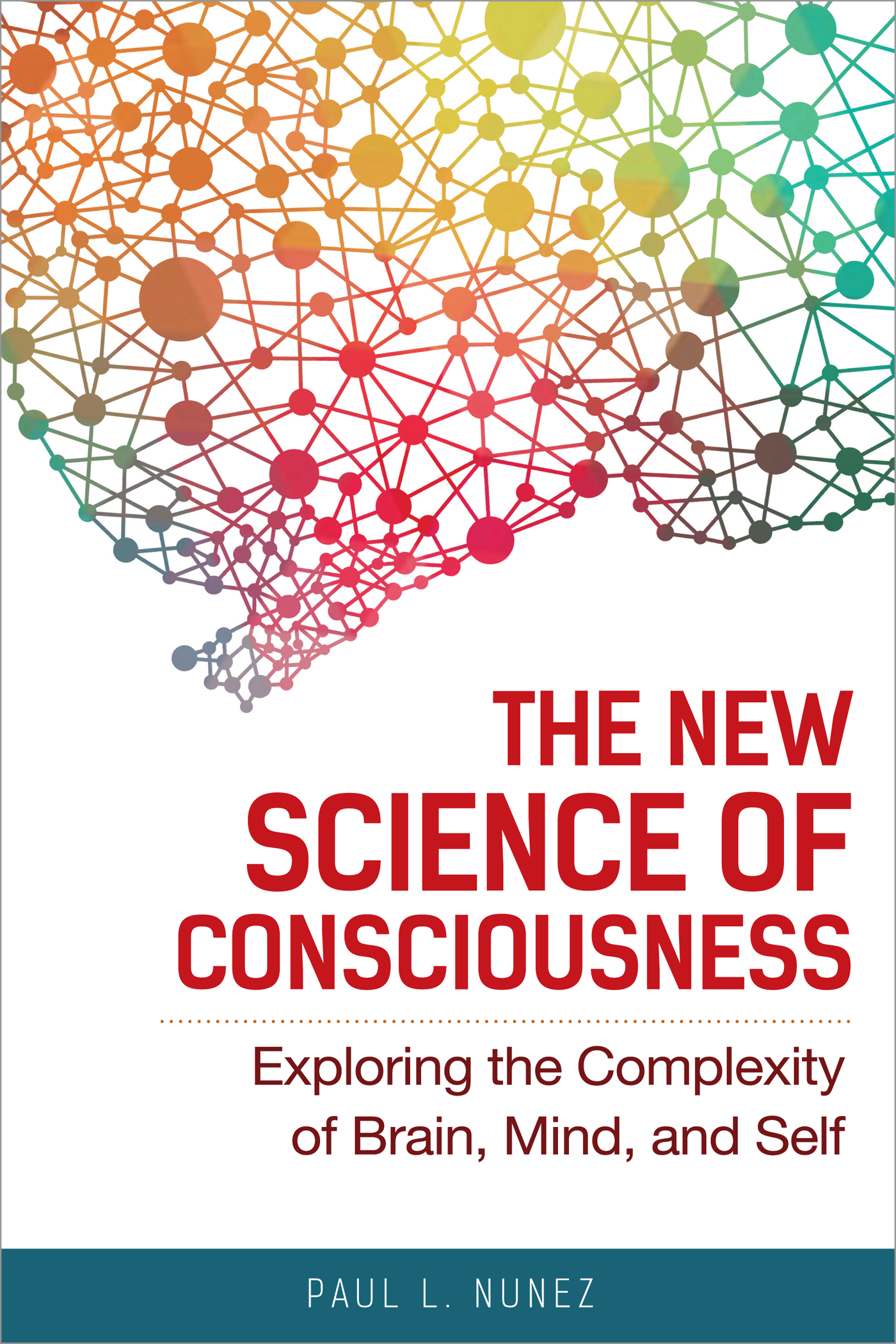 The New Science of Consciousness

Exploring the Complexity of Brain, Mind, and Self

Your brain is a forest. Dense, dark, tangled. The kind we tell stories about. And well we should.

There are ten times as many cells in your brain as there are people on Earth. Brain cells, or “neurons,” are remarkably tree-like: long trunks, stubby roots, a froth of fine branches. They listen, absorbing chemical signals through pliant bark. They speak — all of them, all at once — forcing electrical pulses down straight trunks, breathing molecular missives onto their neighbors. And these whispers and nudges, crunches, murmurs, crackles, add up to a voice. A single voice for all of the forest. A single self.

In The New Science of Consciousness, neuroscientist Paul Nunez describes just how this might happen.

Scientists have known since the 1970s that the brain’s intricate architecture makes it both powerful and versatile. Computerized versions of neuron forests (“neural nets”) have revolutionized artificial intelligence, from automatic translation to voice recognition to self-driving cars. Big tangled networks are the best way to learn anything, whether you are Han Solo or C-3PO.

But Nunez is less concerned about a robot taking your job than whether it can seduce your wife. Can neural nets develop emotions? Plans? Ambitions? When is something conscious? Why and how does consciousness arise?

The New Science offers a compelling (if partial) answer from the forefront of brain and complexity research: consciousness is subtle order in the neuronal storm. The quiet, slender eye of a tornado. The woman’s face hidden in the scattered dots of a pointillist painting.

Maybe Nunez hopes this idea itself will emerge organically from his meandering introduction. Or maybe he feels a paternal obligation to ground us in neuroscience’s nuts and bolts. Either way, he yawns through an extended primer on brain structure, electrical and chemical signaling, brain recording techniques, and more.

The section on chemical signaling, for instance, plods along with textbook tedium: “…neurotransmitters labeled endorphins were discovered; they are generated during strenuous exercise, excitement, and orgasm. Endorphins are produced by the pituitary gland.” The occasional digression sounds like the vague free association of a lecturer pausing to clean his glasses: “…do puffer fish really taste good enough to put up with [the risk of tetrodotoxin poisoning]? Many Japanese think so. The effects of tetrodotoxin have also been used as a nice plot device in a number of movies and television series. It also has application in … studies of animal physiology.”

I’m willing to indulge Nunez a little. Forty years squinting at EEGs must buy him a few tired puns and threadbare anecdotes. If the early chapters proceed with the elegance and focus of a third-grade field trip, they do teem with interesting tidbits. Brain-computer interfaces. Anesthesia stilling the brain’s chatter. And when Nunez finally elaborates his thesis, The New Science hits its stride.

The sheer number of neurons and neuronal connections, he claims, cannot explain the brain’s versatility.

Humans are shockingly good at recognizing faces. The classic “grandma neuron” hypothesis claims that I have a neuron that only sings when I see one Kovessy Vilma (RIP). And a neuron for my boyfriend’s mother, for my family doctor, for the jerk man-spreading on the Brooklyn-bound 3. But storing a face in a single cell is just too risky, says Nunez. Neurons die periodically, but we don’t spontaneously forget our grandmothers.

Time, not spatial intricacy, turns the brain into a powerful, adaptive machine. Thoughts, dreams, and your grandmother’s face live in the brain’s music. They are dynamic patterns that don’t rely on any one cell. Messages can dawdle through neurons or travel in a flash, their speeds sifting out which details will make it from the unconscious to the conscious mind. In the brain as a whole, a deep thrumming sets the brain’s rhythm — different during sleep, waking, thinking, dreaming.

How do these patterns form? Nunez borrows from physics the notion of “emergent phenomenon.” Think tornadoes. Whirlpools. Ocean waves. Close up, each one looks like a bunch of molecules rushing about at random. From afar you see funnels, peaks: big, distinct structures. Your neurons are the frantic molecules. Consciousness is the wave.

What’s more, Nunez argues, the brain and fluid turbulence share an “inherent multiscale character.” Even something as mundane as boiling water boasts this intimate connection between large scales and small. “Microscopic information ‘infects’ macroscopic properties,” he notes. The roiling air of the atmosphere is “exquisitely sensitive” to the proverbial butterfly flapping its wing.

The brain’s dynamics, then, are not only complex but chaotic, which should surprise no one who has written up a grocery list pre-coffee. Chaos, enough of it, could birth a conscious mind.

So far, Nunez’s speculations sound eminently reasonable — partly, I assume, because of my stuck-up physicist’s bias that physics is everywhere, in everything. But he starts to lose me with the next logical leap: that we don’t have the capacity to produce consciousness artificially. After all, he says, we can’t pin down turbulence in a tea kettle. If consciousness comes from chaos, how can we possibly engineer it?

Chaos indeed means we can’t know everything about water boiling in a pot. When does each bubble expand into being? What is its exact size? Location? We don’t know — can’t know. But if you fear the robot apocalypse, this should make you worry more, not less.

Computers can give us an idea of the average bubble diameter, or how often bubbles surge to the surface. They don’t track every single atom. They simulate not only the pot and the water but the randomness that makes exact prediction impossible. I don’t need to know anything about quantum mechanics or van de Waals attractions to boil water — I put it in a pot and turn on the stove.

These simulations are crude, to be sure. No computer has enough bits and bytes to match the number of molecules in a glass of water, much less follow every single one around. Should consciousness require complexity commensurate with the number of molecules in the human brain (and more), Nunez is right that your laptop will never acquire a mind of its own. But he himself argued that time is essential to consciousness, and time is something computers certainly have. If we do create consciousness in computer code, then, it will happen by accident. With our inherently human-centric view, we might not realize what we have done.

To assume that computer-brains cannot become conscious seems stunningly myopic, especially for a scientist open-minded enough to warn that “absence of evidence is not evidence of absence.” Nunez carries this anthropocentrism into his final, wildest whimsy: that consciousness relies on an entity both real and ghostly, an ether of “ultra-information” that permeates our physical world.

The universe teems with unknowable things. There are stars we cannot see, planets we cannot reach. They hurtle away from us so fast that physical laws forbid our meeting. But Nunez’s ultra-information lives beside us, inside us, with consciousness its receiving antenna. Nunez gives this unification of “the physical and mental worlds” a name: the “RQTC conjecture,” claiming for Consciousness a place in physics’ holy trinity of Relativity, Quantum Mechanics, Thermodynamics. (You might as well tell a Catholic to lump Beyonce in with the Father, Son, and Holy Ghost.) Tetchiness aside, this rings of an anthropocentrism we scientists have long left behind.

Just because we humans attach a word to a phenomenon does not make it real. We think of light as both particle and wave. But light is light, it doesn’t care how you think about it. Why must consciousness be an entity, real but inaccessible, like the star (or the restaurant) at the end of the universe? Why not call “consciousness” the emergent behavior observed in the chaotic brain?

Consciousness as emergence could be bigger than us. Can a flock of birds be conscious, or a colony of ants? Humanity as a whole? What if each of us were a neuron? Maybe you can’t see emergent order on the globe, but does a neuron know it is part of a larger self? Or does it go about its business, chattering and singing? Can it hear the harmony over its own voice?

Sophia Domokos is a theoretical physicist specializing in string theory and particle physics.