Pandemic Survival Tips From The 1700s 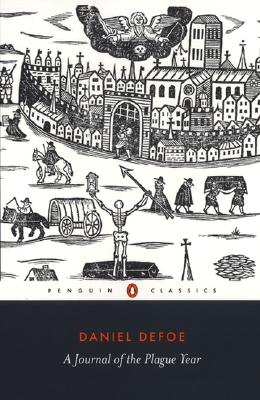 A Journal of the Plague Year

On Friday, April 10, 2020, Daniel Defoe’s almost-300-year-old A Journal of the Plague Year started telling me the future. The previous evening, I’d read a passage in which Defoe’s narrator explored a large, freshly-dug pit in his London neighborhood, soon to be a mass grave for plague victims. Friday morning, I read in the paper that New York City, where I live and grew up, was digging large pits.

Bubonic plague struck Marseilles in 1720, and major ports like London spent the next several years convulsed with fear. Books about the plague sold like hotcakes. Some of the most popular promised wisdom gleaned from the last brutal outbreak: the 1665 Great Plague of London.

Defoe, best known as the author of Robinson Crusoe, threw his hat into the ring in 1722 with the resonant, voyeuristic, and relatable (if repetitive) A Journal of the Plague Year. More a memoir than a diary, the Journal chronicles the 1665 plague through the eyes of a London merchant, deftly capturing a restless reaction to a world falling apart. Nowadays, this means that the first third of the book might feel like a sitcom (ye olde Londoners were afraid of groceries, just like us – pretty funny in a dark way), and the last two-thirds like a fever dream (ye olde Londoners ended up with carts full of dead people – not funny at all). Ultimately, the emotional impact of the book today might be comfort. Like Defoe’s original readers, we watch the narrator survive against increasingly bad odds, and hope to do the same. Journal has essentially three moods: horror story, public-policy white paper, and self-preservation guide. As the narrator wanders his city, compelled to record his observations and reactions, each of these moods bubbles up for shorter or longer snippets. A reader in ordinary times might focus on one such mood. A reader this month might appreciate all three just as Defoe’s characters appreciate a spritz of vinegar: as a distillation of past knowledge into armor against the outside world.

If you just want the how-to guide, here is Defoe’s main practical advice: Get out of the epicenter if at all possible. If you’re rich, go to your country house; if you’re middle-class, go to your brother’s house; if you’re poor, get some handy friends, build a hut in the woods, and rely on charity for food. If you must stay behind, stockpile early and extensively, then lock yourself in at home for as long as possible. Give to food charities at the epicenter; this prevents revolution. If all else fails, spritz yourself with vinegar and pray.

The book is almost 300 years old, but I’m happy to report that the writing style is not stale. Yes, some of the spelling and punctuation are antiquated, and yes, the editor’s footnotes are sometimes necessary for context. But these are easily forgivable if, like me, you’re desperate for gems of gallows humor like “One of the worst Days we had in the whole Time, as I thought, was in the Beginning of September, when indeed good People began to think, that God was resolved to make a full End of the People in this miserable City.”

Similarly, the epidemiology is not modern, but it’s not so old as to be distracting. It would be easy to dismiss a book about bloodletting as irrelevant. But Defoe’s characters take precautions that are recognizable and sympathetic. They stay at home and practice social distancing. They even have contactless payment, dropping perfect change into a shopkeeper’s bucket of vinegar.

The book is deeply repetitive, though, which can be a hard pill to swallow. A certain number of tropes appear every time the narrator thinks of them, which is about every ten pages: walking down the street and hearing death-screams from the houses, for example, or another anecdote about a family all dying on the same day. Readers in 2020 understand that one might spend large portions of an epidemic fixating on one type of horror. But if you don’t find this obsession cathartic, it can (forgive me!) get old quick.

Defoe can also be off-puttingly geographic. It is not just ‘the main streets’ which sprout grass for want of foot traffic; it is “the great Streets within the City, such as Leaden-hall-Street, Bishop-gate-Street, Cornhill, and even the Exchange it self.” (No grass in Manhattan’s Times Square, so far.) The constant GPS chirps do add authority, and if you are familiar with London I imagine they’d add dread. If you’re not, then most of them can be safely ignored. But I did need a map to understand why it was important, for example, that the plague had spread to Southwark. (For the record, this meant it had crossed the Thames.)

What makes the whole thing worth reading, though, are Defoe’s insights about epidemic governance. The most controversial policy in 1665 was the “shutting up of houses”: If someone in your household was sick, you had two hours to inform the local government, after which your entire household (sick or otherwise) would be locked in for weeks. Guards were posted at your door all day and night, leaving only to buy your essentials — at public expense if necessary.

This went over as well as you might imagine. Some secretly evacuated healthy family members before starting their official lockdown. Once quarantined, others got out through back windows, with bribes, or simply by murdering their guards.

In the last few weeks, cooped-up Americans have started to venture out more and more, and government restrictions have started to ease. At times it’s not clear who’s leading whom. Maybe we’re going to the beach because our governors allow it. Or maybe the government is legalizing common behavior just to pretend they’re still in charge.

Defoe’s carts full of bodies indicate the danger of non-compliance. But his plague only had one wave. So suppose a second wave hits us and our politicians beg us to go back inside. And suppose we remember that they were cool and let us host Memorial Day cookouts. Will that make us more or less likely to obey them? Hold onto your masks, folks – we’re about to find out.

Benjamin McKenna is a Ph.D. student in mathematics at New York University. He is complying with stay-at-home orders.