Not Too Hot, Not Too Cold 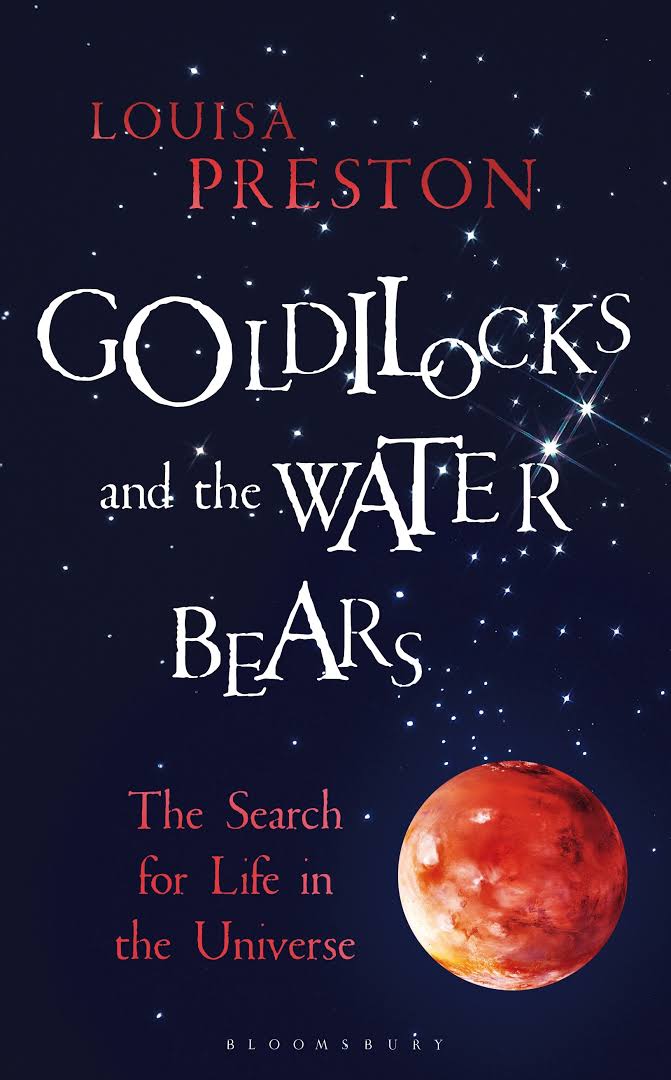 Goldilocks and the Water Bears

The Search for Life in the Universe

“Either we are alone (in the Universe), or we are not. Both possibilities are equally terrifying.” — Arthur Clarke

This disturbing and intriguing dichotomy sets the stage for a remarkable voyage through time and space, with planetary scientist Louisa Preston as our guide.

In Goldilocks and the Water Bears: The Search for Life in the Universe, Preston introduces us to astrobiology, the study of life in the universe. Over two hundred and seventy five thrilling pages, she examines how our biochemical history can illuminate the uncharted paths of our future.

A biologist myself, I know that there is to date no evidence of life outside Earth. With a refreshing splash of common sense, Preston admits that “astrobiology has yet to prove its subject matter actually exists.”

Though it is rooted in well-respected disciplines such as biology and physics, astrobiology also has a hint of the paranormal. This “marriage of science fiction and science fact” will allure readers into an explosive cocktail of fantasy and hard-core scientific discourse.

Preston has worked as an scientist for NASA, and for the Canadian, European and UK Space Agencies. She designs and leads practice Mars missions, and draws up plans for “terraforming” Mars — a way to create futuristic Earth-like habitats on other planets. Only such an impassioned spirit would describe a Martian landing site as “deliciously inhabitable” or affectionately personify the red planet as “belching out a gas.” Metaphor-rich descriptions abound, pointing to Preston’s enthusiasm for Mars and astrobiology in general.

Even more revealing is her life-long admiration for science fiction and its lasting influence on pop culture and mainstream science alike. Astute references to Star Wars and Star Trek remind of our universal desire to contact alien civilizations, and highlight the anthropological significance of our privileged spot in the universe: a Goldilocks planet, not too cold, not too hot.

From ancient stellar explosions to icy sheets of soil engulfed with microbial life, we learn that the history of the universe and the history of life are one and the same. Preston discusses the environmental conditions that conspired to spark life on Earth, and its subsequent evolution. A gargantuan Goldilocks fairy tale, life on this planet is as beautiful and complex as it is fragile and improbable.

The author writes with the rigorous pen of a scientist and the indefatigable patience of a kindergarten teacher. From witty asides (the Big Bang is described as the “greatest cosmic event ever not witnessed”) to literary yet pedagogical descriptions (a pulsar as the “dense, rapidly spinning corpse of a supernova explosion”), Preston makes the voyage through life’s turbulent history a rather enjoyable glide.

Avid and impatient readers may want a quick answer to the timeless question: how likely is it that we will find life outside of our beloved pale blue dot? The short answer is that we don’t know, but Preston guides us skillfully through the mathematical machinery to estimate the probability. She herself thinks it’s just a matter of time, stating confidently that we will find life, and providing a map of where in the universe we should look.

Preston reminds us that “it’s the simpler life that can teach us the most:” the search for alien life starts right here at home. Extreme conditions in some parts of the Earth and the “extremophiles” that live there have allowed Preston and other scientists to understand the interplay between what life needs to flourish and what life can tolerate before it ceases.

Like all heroes of storytelling, Preston has her flaws. I was disappointed not to find any explicit reference to the anthropic principle, the philosophical observation that the Universe must have those properties that allow human life to develop, or else we would not be here to question it. Similarly, there was little mention of the controversy surrounding theories of the origin of life, of the transition from non-living to living matter.

Notably absent, also, were references, whose omission admittedly improved the reading experience but denied the reader the possibility to investigate further. The text would have benefitted from some instructive visuals: images, for instance, of Curiosity, the autonomous vehicle that rovered over Mars, or a timeline with noteworthy events related to the origin of life since the Big Bang.

“And what about the water bears?” Preston asks in the Preface. I confess I thought it was a trivial wordplay on the original Goldilocks story. The truth of the water bears turns out to be more awe-inspiring and complex — a microscopic portrayal of grit. And once you see a water bear (or a picture thereof), you’ll never forget it.

I cannot imagine a more pleasant way to digest a few billion years of the living universe’s history than with this book. Goldilocks and the Water Bears is a rare gem that encourages us to contemplate the coldest biochemical truths and the warmth of human dreams. Far from terrifying, Preston demonstrates that the search for life in the universe is a magnificent endeavor. You will begin to think like a navigator in the universe’s most elite crew: the human species. All aboard!