From Reluctant Husbands to Anti-Vaxxers: How to Change Minds in the 21st Century 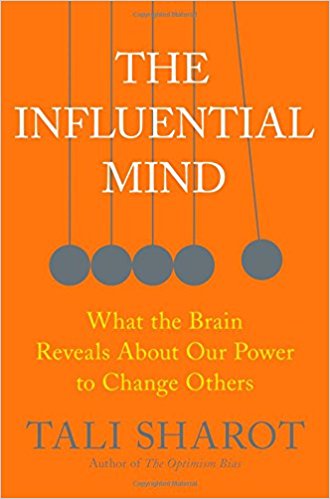 What the Brain Reveals About Our Power to Change Others

Remember that time you tried to convince your Aunt Sally that vaccines really work, and almost ruined everyone’s Thanksgiving?

But perhaps your dear aunt is not an idiot – or maybe she is, but so are you. In The Influential Mind, a fascinating, accessible, and frankly quite useful book, neuroscientist Tali Sharot draws on recent advances in neuroscience, psychology, and economics to explore “the systematic mistakes we make when we attempt to change minds.”

Opening with an-all-too recent example, Sharot exploits the fresh wound of the 2016 United States presidential election to demonstrate that “what most of us believe will cause others to alter their thoughts and actions is wrong.” But fear not: the rest of the book is organized into less distressing and more personal sections with telling titles — Prior Beliefs, Emotion, Incentives, Agency, Curiosity, State of Mind, Other People, and The Future of Influence. While the first seven chapters address key factors in influencing others, the eighth chapter is where Sharot, principal investigator of the Affective Brain Lab at University College London, delves into cutting-edge science regarding brain-computer interfaces. This topic can be intimidating even for nerdy research scientists like myself, but Sharot includes entertaining illustrations that help any reader visualize a truly fascinating idea: a computer connecting two brains so that ideas can be shared without words.

Throughout The Influential Mind, Sharot relies on a simple formula each of her seven key factors to influencing other people. First, she introduces the topic with an anecdote: “On a hot September day in 1962, President John F. Kennedy was standing in the Rice University football stadium…” Sharot then places that story in the context of the concept at hand: How JFK used emotion to change the nation’s opinion about reaching the moon. Finally, Sharot backs up the importance of each concept as a factor of influence with studies conducted in her own lab at University College London or at other prestigious universities. Sharot effectively takes her own advice, building on common prior beliefs and experiences before bringing in any scientific evidence. She writes simply, without jargon or flowery prose. Her narration is there to guide your understanding, not impress you with fancy phrases. While verging on the formulaic, Sharot’s method works: the stories stick, and so do their associated lessons.

I’ll admit that I initially picked up The Influential Mind hoping to read How to Win Friends and Influence People for the 21st century. Sharot’s advice does have significant overlap with Dale Carnegie’s 1936 classic. They both tell us to smile and start arguments by finding common ground, but Sharot’s version comes with memorable vignettes, as well as the “supported by science” stamp.

The Influential Mind is more an explainer on how our minds work than an instruction manual — though it does have its teaching moments. In the chapter on incentives, Sharot implores us to remember that fear freezes and hope motivates. She advises “using the stick” to prevent someone from taking action, and “using the carrot” to encourage it. In a particularly memorable anecdote, a woman tried to motivate her husband to go to the gym by warning him about his weight and elevated risk of heart disease – to no avail. “Then, one night after her husband came back from a rare visit to the gym, she complimented him on his defined muscles. The next day, he went again.”

This lesson also has more serious implications: fear of vaccines is incredibly effective at preventing parents from vaccinating their children. Fear of deadly disease, not so much. According to Sharot’s work, “the human brain is built to associate forward action with reward, not with avoiding harm.” Thus, rather than warning parents about the dangers of skipping vaccines, the medical community should tell them that vaccines will let their kids live happier, healthier lives, miss less school, and spend more time playing with their friends.

It’s worth noting that Sharot’s instruction isn’t always so agreeable. The chapter on emotion, for example, borders on preachy. Sharot writes that “…your feelings leak out and are absorbed by others near and far.” Like a Care Bear, shooting magical rainbows of love from my chest? As a scientist, cynic, and New Yorker, talk of positive energy doesn’t always vibe well with me. But Sharot does explain the (convincing) science behind her “share the love” logic. She supports the few cheesy lines with brain scans and peer-reviewed articles. In a 2002 study, for example, researchers asked groups of students to complete a task together. Unbeknownst to the students, the researchers had inserted an actor into each group who would act as if they were in a good mood or bad mood. Not only did the groups with a happy actor experience better moods themselves, they were more likely to cooperate and performed the task better overall.

Other memorable passages include the section on the influence of others, which Sharot uses to poo-poo the current popularity of crowdsourcing, a decision-making a strategy popularized by finance journalist James Surowiecki’s 2004 book, The Wisdom of Crowds. Crowdsourcing relies on the notion that aggregating information in groups results in better decisions than could have been made by any single member of the group. As a neuroscientist, Sharot is concerned by the broad strokes with which crowdsourcing has been applied to decision making. She explains that while crowdsourcing might be the best means to estimate the weight of an ox at a county fair, it’s not suitable for large-scale social issues in which people become biased by others. “If you read Surowiecki’s book carefully …you will notice that below the title’s surface, he cautions his readers that the group is wiser than the individual only under very specific conditions.”

With a fair mix of historical commentary, current events, neuroscience, and personal applications, Tali Sharot’s The Influential Mind is entertaining and above all accessible. While it’s not a seven-step guide to convincing relatives over Thanksgiving dinner, The Influential Mind provides all the tools and knowledge, should you be so brave.

Kaitlyn Scacalossi is a Ph.D. student in Immunology at NYU Medical Center. She studies how genes are turned on and off in inflammatory diseases.