The Secret to World Domination 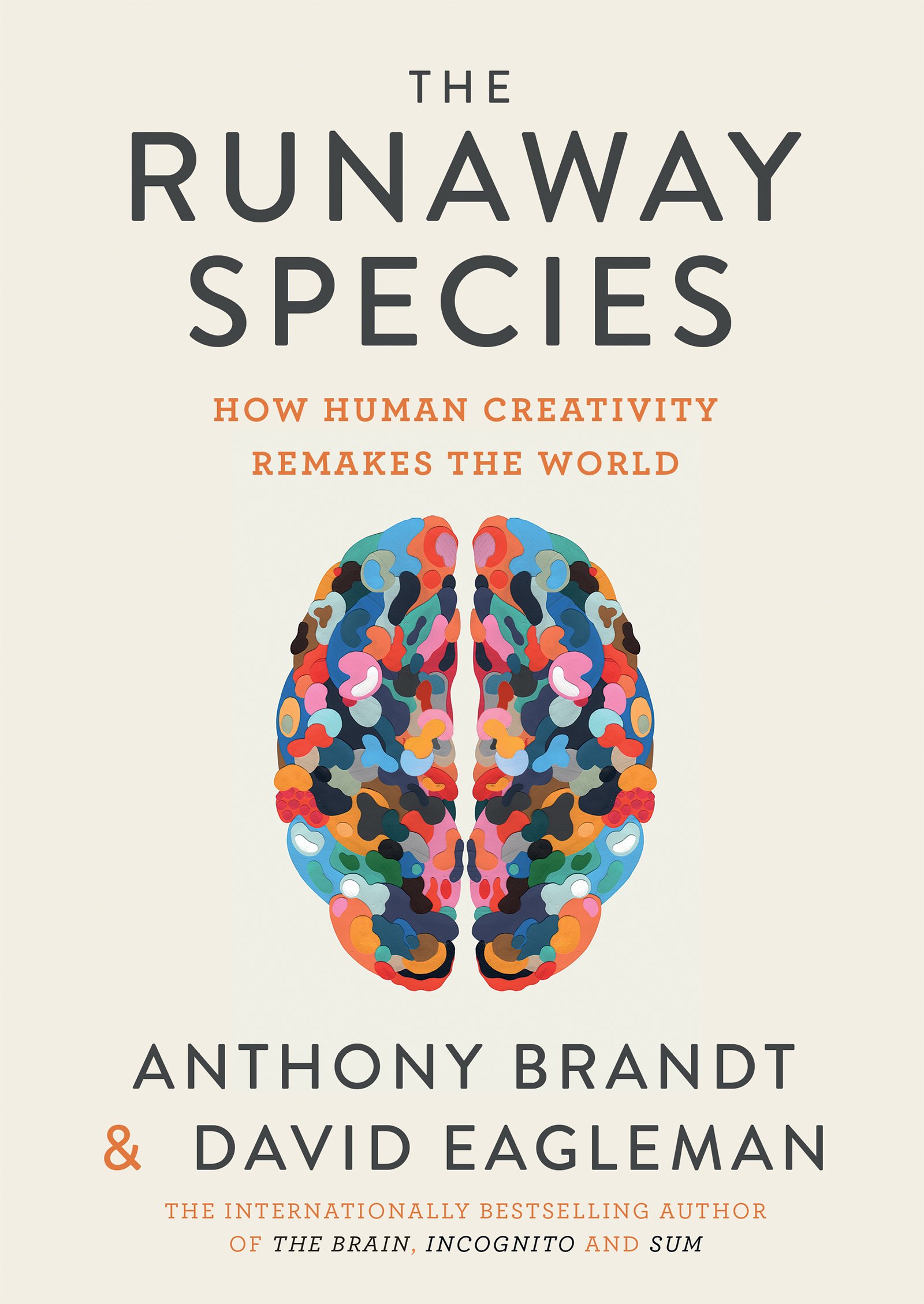 How Human Creativity Remakes the World

Is the human species as special as we like to believe? After all, gorillas can also fashion and use tools. Chimpanzees hunt with spears. Elephants recognize themselves in a mirror. Dolphins mourn their dead. Hell, even ravens outperform most children when it comes to planning for the future and delaying gratification. But there must be something that sets us apart — how else could we have conquered the world?

That something is an evolutionary quirk hidden in our brains: our capacity for creativity exceeds that of any other animal. This is the central assertion of The Runaway Species, a collaborative project of composer Anthony Brandt and Stanford neuroscientist and author David Eagleman.

Ravens might have better willpower than children, but birds don’t plan for decades at a time to start a new business or compose a symphony. “Sharks, egrets, and armadillos don’t launch themselves into long, risky projects,” the authors claim. Surely, they assert, the ability to delay gratification for that long comes from the uniquely human ability to think abstractly and simulate the distant future in our mind’s eye.

“Humans win attention by surprising one another.” For social creatures like us, attention is a sought-after resource, and it seems there’s no better way to come across it than to reshape society or create something new. We don’t need an immediate reward, because a bigger payoff within our social networks is more enticing.

Just as creative ideas are built on those that came before them, our ability to imagine a different future grew over time as well. As iterations of the genus homo evolved, our skulls changed. Our jaws shrank and weakened, and that extra space was granted to the cavity housing our brains. This in turn allowed our brains to develop and grow — especially the prefrontal cortex that allows us to engage in high-level thought and social behaviors.

While there are other social animals, like the domesticated wolves we allow into our homes, no other species has the same oversized cortex that we do. It is this chunk of brain that differentiates us and that, Brandt and Eagleman argue, has allowed us to conquer and constantly reinvent the world. We have the same basic wiring as animals that behave more instinctively, but our additional brain matter lets us weigh alternatives before acting.

Time and time again, the authors tell us that our brain structure is what allows us to take the sum of our experiences and culture and use it to envision a new, different future. As Brandt and Eagleman put it, people absorb their surroundings and use them as inspiration to come up with a new version of the world.

Throughout The Runaway Species‘ fast-paced prose, Eagleman and Brandt bombard the reader with example after example of people who used their brains to their full potential and reshaped the world around them. We learn how Edison’s endless experimentation led him to the first mass-produced light bulb and how Greyhound’s founders began envisioning a luxury tour bus years before such a thing was feasible.

“The civilized world is the product of what-ifs, built atop one another generation after generation,” the authors conclude. Just as tastes in hairstyles and architecture are perpetually changing, Eagleman and Brandt argue that human culture is forever a work in progress and that there is infinitely more to squeeze out of our creative brains. We never get smarter or more creative, but our tools, our technology and our society are always changing, providing new avenues for creation.

From an evolutionary standpoint, there’s no reason to put extra work into creative thought when we could just scavenge for food. It is the balancing act between our brain’s desire for energy efficiency and the excitement it feels (the authors tend to personify the brain as something separate from the rest of us) that drives us to innovate and recycle. But Eagleman and Brandt point out that even our most brilliant, unique ideas are confined by what our experiences and culture tell us might be possible. For example, no classical European composers deliberately de-tuned their instruments for effect.

Eagleman and Brandt lump all of the ways our brain abstracts and simulates the future into three main categories and techniques, each of which gets a dedicated chapter early in the book. The first is “bending,” which the authors never quite define but seems to represent the idea of taking in information from the world and interpreting it in a unique way — be that creating an artificial heart that cycles blood rather than pumping it, or painting the same horse in distinctive styles. The second category is “breaking:” taking the best components from what we’ve inherited and turning them into something new. The third is “blending,” or making far-flung connections among different concepts and combining them into something new. Through the three B’s, Eagleman and Brandt argue, our brains simulate “what if” scenarios and concoct new ideas, limited only by the invisible constraints of our cultures.

Much of the book is composed of examples — countless instances of new inventions and endeavors that illustrate Brandt and Eagleman’s thesis. Embedded in all the who, where and when of these anecdotes is a strong feeling for the how and why, even when it’s not explicitly spelled out or explained with brain science.

The actual science of creativity appears at the beginning and end of the book. You won’t necessarily learn the fine details of whence creativity emerges but rather why the brain seeks it out and responds to it so well. These sections do detail the neurological basis for several of the authors’ arguments, but for the most part, Eagleman and Brandt focus on punchy anecdotes that often illustrate rather than explicitly define their logic.

The Runaway Species is a simple and delightful read — no science knowledge required. And in a rare triumph, the fact that this book was written by two authors never got in the way of making me feel like someone was telling me a story or delivering a thirteen-chapter TED talk. But for those who want to dive into the neuroscience of creativity, this book may not deliver.

Though built around brain science, The Runaway Species makes several throwaway claims without a scientific explanation. The book seems so hell-bent on being lay-person friendly that when important scientific issues pop up, they are just as quickly swept aside. In one paragraph, Eagleman mentions that the human memory is deeply flawed. This (true) statement goes unexplored, leaving those who haven’t studied psychology or neuroscience in the dark.

The same goes for the book’s quick assertion that widespread creativity and abstract thought are possible because various regions of our brains collaborate. The presentation is so simplified that it does a disservice to the scientifically curious reader who may want a more nuanced view. When Eagleman and Brandt describe species extinction or humanity’s unusual tradeoff between strength and intellect as Mother Nature trying out new things to see what works, they fail to explain that evolution is the result not of purposeful tinkering, but of random mutations that may or may not improve reproductive success.

These points don’t affect the authors’ broader argument, but this book on brain science could leave the reader with several distracting scientific questions. While many of the people who would pick up a book with a big picture of a brain on the cover might already know the answers, those who don’t could get the wrong idea.

The Runaway Species begins with some hard science. It’s there that we learn about “repetition suppression.” This is what scientists have named our tendency to spend less attention on something after we’re familiar with it — or the scientific explanation for why jokes get old. An academic figure shows how our brains respond less and less each time they’re presented with the same input in an effort to save energy.

And yet in spite of this, we learn that the brain seeks out novelty and once more “gets excited when it updates.”  This is why, as the authors describe, foraging animals will spend some time searching for a meal in new places even when they have a tried and true source. But then most of the book goes by before we see another in-depth scientific explanation.

Not until the end do Eagleman and Brandt explain that creativity is possible because of our enormous prefrontal cortex. Before that, readers don’t learn that it’s the prefrontal cortex that allows us to use our imagination to simulate the future — to consider what might happen down the road — and play out alternatives within our mind. The science on why our brains are willing and able to spend extra energy on innovation comes after a two-hundred-page argument that those are the skills crucial to creative success.

The book culminates with a critique of modern education and workplaces, providing evidence for the benefits of a strong investment in the arts and of incentivizing students and employees to engage in creative projects. The authors also urge the world to stop marginalizing women and people of color. “Access to creative schooling shouldn’t depend on your postal code,” they write.

Eagleman and Brandt point out that world-changing innovation can come from anyone. The fact that a lot of famous inventors were white men reflects their societal privilege, not biological differences among races or genders. Once again, they have the examples to prove their case, showing how an underfunded school transformed itself after a major investment in the arts.

While the authors take great care to discuss the projects and creative triumphs of people from various demographics, and make an earnest plea to value the ideas of the underserved, they give off the somewhat alienating vibe that they are fighting for the equal treatment of minds — the actual people attached to them are almost an afterthought. But rather than overanalyzing any specific wording, it’s easy to see that the authors see their call for the improved treatment of women and minorities as a necessary extension of their thesis: that creativity is defined by one’s culture. In a culture where people are mistreated, it’s that much harder to reach one’s potential.

At the end of The Runaway Species, Brandt and Eagleman implore us as a society to invest in imagination. Just as no one could predict that a physically weak, upright ape that exposes its belly to the world and depends on its parents for years would someday bend the world to its whim, no one can guess which — or whose! — ideas will take off.

Dan Robitzski is a recent graduate of the Science, Health & Environmental Reporting Program (SHERP) at New York University. Dan, a former neuroscientist who wanted to write about science instead of doing it, has written for Scientific American, Undark, Popular Mechanics, and others.