So Successful It Hurts 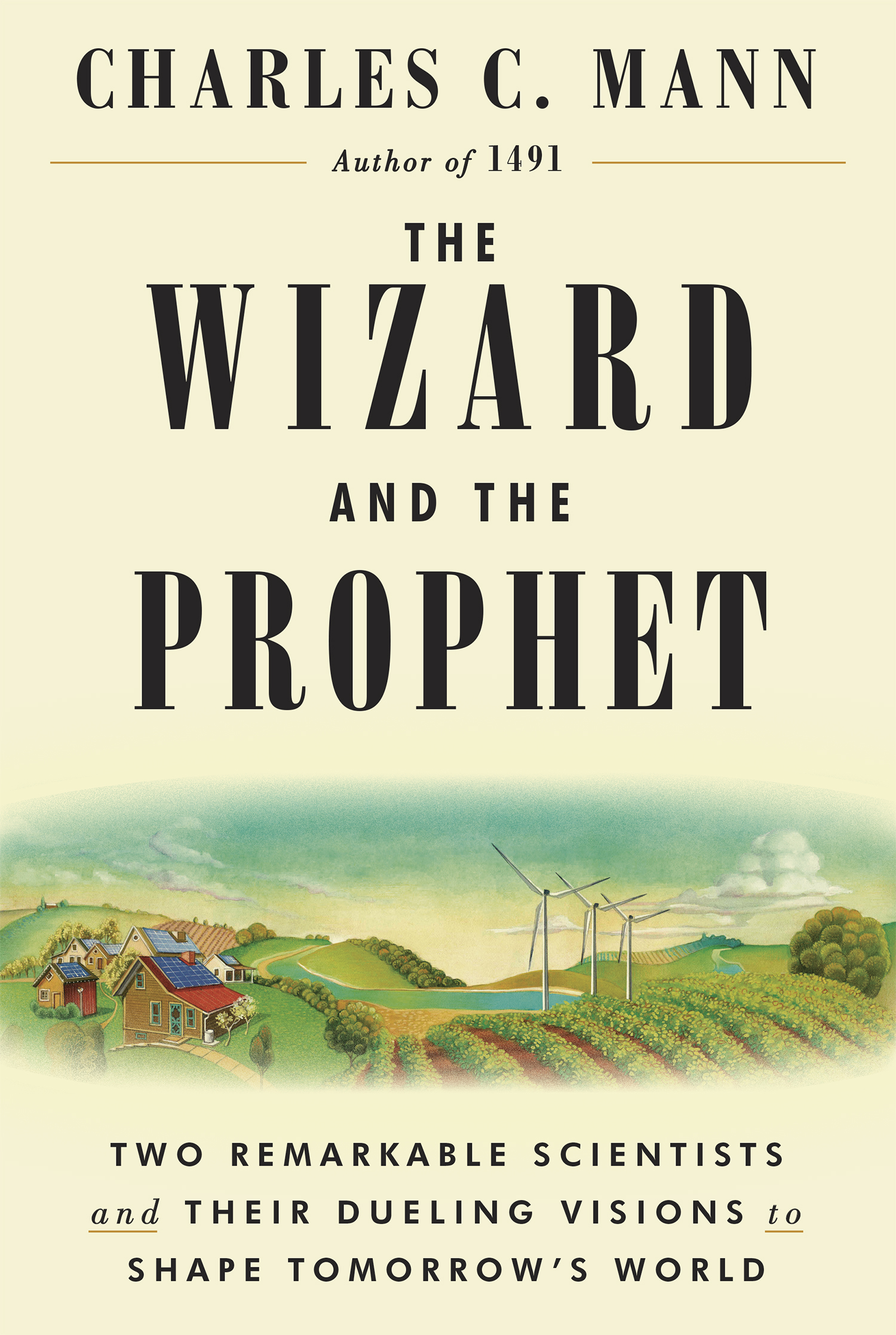 The Wizard And The Prophet

Just 30 years ago the world’s human population was 5 billion. Today we struggle to feed every individual in our population of 7.6 billion. By 2050, we will reach 10 billion people on Earth. Let that sink in.

When addressing our impact on the Earth, as well as the future of our species, we are confronted with a desperate list of options. Words like “renewable energy,” “GMOs,” “monoculture,” and “fracking” come pre-loaded with positive or negative connotations. Our visceral responses often feel as though we are donning political hats, rather than adopting well-thought positions. Any unequivocal stand will fall short when trying to answer the hard questions that Charles C. Mann poses in his new book, The Wizard and The Prophet. For starters: how will we “feed 10 billion mouths?”

It’s a daunting question with no certain solution—and this uncertainty leaves ample space for critique, theory, and mischief. There is comfort in knowing what to do, and knowing how to act—knowing what is morally correct. But what if we just can’t know? What if our scientific models can’t compute with certainty? While reading Mann’s book, you’ll be unnerved by how easily the foundations of your thoughts shake beneath you.

Mann is the best-selling and award-winning author of 1491 and 1493. He is also a journalist, who has written for many science-oriented publications like Science, Wired, and National Geographic. In The Wizard and The Prophet, Mann sets aside his prejudices while pondering the future of our species and planet—and he asks us to do the same. From the start he presents us with a grim reality that begs our overdue attention. Mann opens with a quote from the late Lynn Margulis, whom he admires as “one of the most important biologists in the last half century.” “It is the fate of every successful species,” Margulis claims, “to wipe itself out.” Are we, as Margulis suggests, “just another briefly successful species?”

Mann explores with us—this is truly a journey for both reader and narrator— two major schools of thought on our uncertain future: that of the Wizard and that of the Prophet. While both schools acknowledge that the human species is reaching a limit the Earth cannot sustain, they diverge on whether this limit is fixed (the Prophet’s warning) or whether through scientific advances it could be shifted (the Wizard’s optimistic opinion).

The Wizard, embodied by plant pathologist Norman Borlaug, serves up a flashy dish of “techno-optimism,” proclaiming that science will answer our problems. Borlaug, an Iowan farmer born in 1914, is remembered today as a leader of the “Green Revolution”— the scientific innovations that increased agricultural yields worldwide. For his pioneering efforts, Borlaug won the Nobel Peace Prize in 1970.

We first meet Borlaug in 1944, as he works feverishly in the plains of Mexico to breed wheat with increased yield and resistance to a parasitic stem-rust fungus—a threat in agriculture that is responsible for “millennia of famine,” according to Mann. Borlaug’s use of selective breeding —picking out genetic variants providing favorable traits in plants, but not yet introducing foreign DNA— is a sort of GMO-lite. It’s a precursor to GMOs, both methods being the ultimate Wizard’s solution to solving problems of food scarcity in a world full of people.

Mann contrasts Bourlag the Wizard with Prophet William Vogt. Born in Long Island, New York in 1902, Vogt was a lover of birds and nature, and an early voice for environmentalism. Unlike the Wizard, he accepts the undeniable reality of natural law and our place within it, counseling us to protect the land and pull back from our wasteful lifestyles.

Mann details Vogt’s biography, from his modest start in birdwatching to his unlikely recruitment in 1938 by the Compañía Administradora del Guano to Peru’s offshore islands, where he “spent 3 years on a manure pile in the interest of science.”  These deserted islands were nesting grounds for millions of cormorants, whose nitrogen rich feces (guano) can be used to reinvigorate nitrogen-depleted soils and increase crop yield. The guano economy boomed in the 1860s, Mann writes, leaving us just short of a “global war over fertilizer.” Vogt’s recruitment was in response to a large, unexplainable drop in cormorant numbers, threatening the guano industry. After years of research, Vogt implored the Peruvian authorities to stop harvesting the guano and allow the island to return to its natural state—for only then would the ecosystem heal. Vogt would view with grief the excessive application of nitrogen to soils where it was likely to be lost through runoff, wreaking havoc on nearby ecosystems. There are natural limits, he said, and we must live within them.

Mann starts us off with these stories that illustrate how Vogt and Borlaug built their views, with the ultimate intent of having us don our own pairs of “Vogtian and Borlaugian spectacles.” Mann challenges us with questions about the future of food, fresh water, energy, and climate change, providing us with both the Prophet’s and the Wizard’s vantage. This back-and-forth will have you nodding in agreement with one, then, like a traitor, revoking your stance to agree with the other, leaving you questioning where your allegiance lies—a testament to Mann’s ability to exhaustively and objectively explore each side.

By casting this as an either-or debate, however, Mann glosses over places where these two paths may operate synergistically—accomplishing more together than they can alone. He addresses the opportunity to strike a balance in his prologue, but drops this conversation early on. The idea of a balance is notably absent when Mann tackles complex, tech-heavy questions like the future of energy. Part of me feels it might have been prudent to reserve more than a couple sentences for how a blending of ideas from both sides might foster a better solution, even if that means relying on Wizardly “techno-fixes” while we work on the development of more affordable and efficient renewable energy and its storage. However, Mann makes it clear that this is a purposeful omission. By doing the grunt work, he distills for us all the information needed to formulate our own conclusions. I find no fault in this approach, especially since the reason for striking a balance can be political expediency, not a lack of knowledge or technology needed to make progress.

Where Mann is most successful, aside from his clever and entertaining storytelling, is his ability to dig from the rubble difficult questions that we as a society are often afraid to face. The world has been acting out a “tragedy of the commons,” where the Earth is a common good accessible to all. To be economically relevant means being a ruthless user of our planet—all countries following this course will ultimately lead to Earth’s rapid depletion and deterioration. How, as a divided and competitive world, can we come together to solve a problem that is distant enough in time and space to be ignored in the day-to-day? At one point we’re asked to wonder if by addressing climate change today might we be “valuing tomorrow’s rich more than today’s poor?”  Each conundrum hits you like a mallet striking a gong: the reverberations seem to carry indefinitely.

Like me, you might find yourself to be a mosaic of Borlaug and Vogt. As a plant biologist, I was encouraged by Mann’s treatment of the GMO-“issue.” Mann devotes an entire appendix to the abundance of scientific research demonstrating the safety of GMOs in public health despite widespread skepticism— a very Borlaugian stand. At the same time, I am compelled to call myself a Prophet when Mann asks if humans are anything special in a world of vast biodiversity. Through Vogt and Margulis, Mann reminds us that “people [are] biologically fated.” Populations boom and crash, and we must grapple with the reality (and comic tragedy) that for the US and other Western nations “growth [is] an overriding social goal.”

In reading The Wizard and The Prophet, be open to testing your ideals. Mann will not provide answers to the questions that come up as you read, but he will give you all the information you need to ask those important questions—questions that should have been asked, and perhaps answered, yesterday.

Nicholas DelRose is a plant biologist and Ph.D. candidate at NYU.