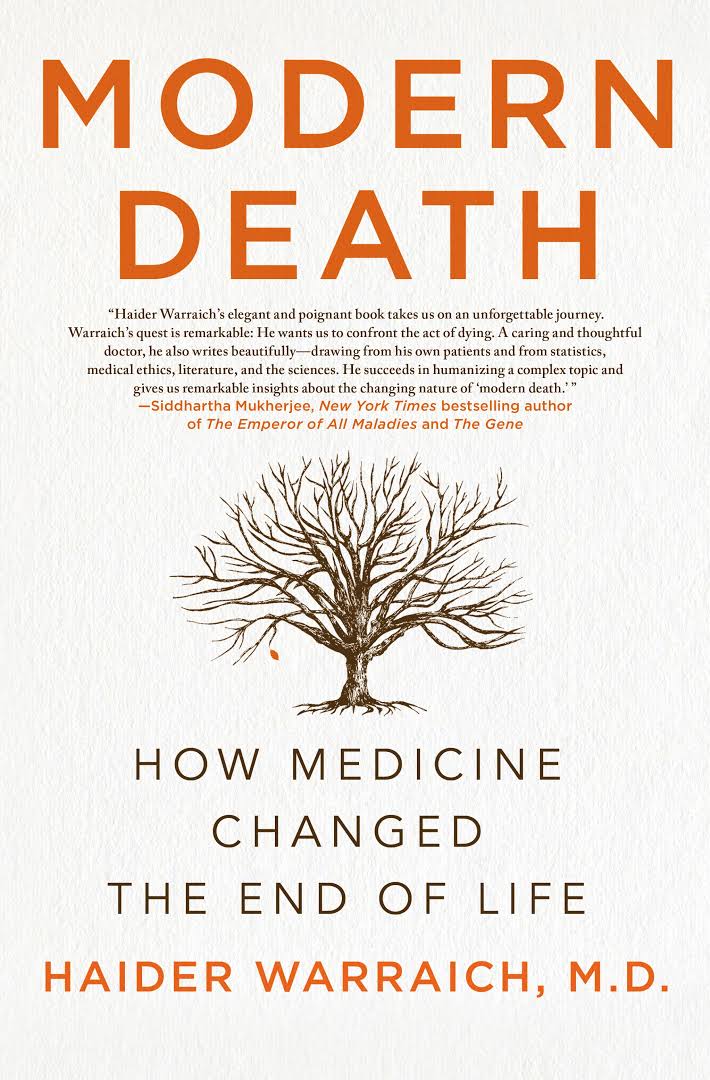 How Medicine Changed the End of Life

Do you know how your parents or your spouse want to die? My mother knows exactly what to do with my dad’s company if something happens to him, but she doesn’t really know what to do with him. Family dinners are great for discussing financial crises, philosophy, travel, relationships, life. But growing up in Greece, I don’t remember a single family discussion that involved death. We are afraid to even mention the word because of its grim, inescapable implications. We feel that it doesn’t concern us, at least not for now. We feel that it might bring bad luck.

But unpleasant as it may be to discuss, it’s a relief to know how your loved ones want to spend their last days so that you don’t have the burden of making the decision. Should you keep them on a ventilator for what could be years or gently let them go?

In his new book Modern Death: How Medicine Changed the End of Life, Haider Warraich, a young cardiologist at Duke University, helps us understand how one of the most fundamental and significant events in our lives—indeed, the final one— has dramatically changed because of technological advancements. He argues that modern medicine has created a “dying” phase in many people’s lives, when they are neither alive nor dead. They might have a beating heart but no ability to communicate with their environment; they might have a terminal disease accompanied by excruciating pain, but are still alive. All these “in between” conditions are new to humanity and raise significant issues worthy of discussion. Warraich tackles the ethical and social implications of these changes, and how they challenge both a dying individual and the family members who attend this final passage.

In the past, people often died suddenly, as a result of infection or injury. Nowadays the majority of people go through a prolonged dying process, when their lives are extended, typically via the use of mechanical support or other “heroic” measures. For Warraich, the case of Karen Ann Quinlan marks the start of this dramatic change. In 1975, when she was 21 years old, Quinlan became irreversibly comatose and probably the most important figure of the “right to die” movement. Her parents requested that she be withdrawn from mechanical support, a request that was declined both by the hospital and the New Jersey Superior Court. A long controversial court battle ensued, which finally came to an end in 1976 when the New Jersey Supreme Court ruled that patients and family members should be allowed to play a major role in medical decision-making. But the ruling also placed an enormous burden on families; indeed Warraich writes that Quinlan, “more than any other person in history, would come to define modern death.”

As a cardiologist, Warraich experiences end-of-life situations on a daily basis. An eloquent, thoughtful writer, he draws on law, statistics, sociology, theology, biology and medicine to consider the multiple dimensions of modern death. He shows that an important problem in medicine, challenging to physicians as well as patients and their families, arises with interventions like cardiovascular resuscitation (CPR), where the dilemma doesn’t involve knowing how to keep someone alive, but rather knowing when is the most appropriate time to let them go. “Almost everyone in medicine knows how to start CPR, when to start CPR, really what to do in CPR under even complex situations,” he notes, “but the one thing that almost no one really teaches us, and there are no guidelines for, is when to stop CPR.”

I think this dilemma is intrinsically connected with the definition each of us gives to death, which significantly varies depending on our cultural background and personal experiences. How do you know that your loved one is actually gone? In many spiritual cultures, like Islam, people believe in the existence of a soul and that a person is really gone not when vital signs disappear, but when the soul leaves the material body. For a Muslim, it is hard to conclude that a loved one is dead if their heart is still beating, despite the fact that the patient is pronounced brain dead. Since a part of the body is still functional, even with mechanical support, the soul might still be there. Therefore, the definition of death becomes more complex if we consider cultures other than Western civilization.

If your heart is still beating but there is no way you can communicate with your environment, are you alive or dead? These are the kinds of questions that most of us avoid, but all of us need to face. Warraich introduces us to his world, where he is constantly exposed to incidents that fire these questions. On one occasion, he was treating David, a chronic heroin user who went into cardiac arrest. David ended up in a vegetative state, displaying only basic reflexes and lack of any higher brain function. The doctors “wrote in their notes that the likelihood of a poor outcome was 100%.” David remained comatose for months, then he suddenly woke up. “Hello Doctor,” he said. This story clearly indicates the difficulty of diagnosing death, of telling when a person is alive and when one is dead.

Although the book provides rich biological detail about the science of mortality, from the death of our cells to the structure of the brain and the basis of consciousness, the tone never becomes didactic. Warraich maintains a mostly conversational style throughout, explaining his thoughts clearly and admitting his potential biases. He analyzes each clinical situation with superb insight and captures the idiosyncrasy of the people he is dealing with, both patients and family members, with shrewd empathic observation. “More than through anything else in a patient’s room, one learns most about patients through the brave guardians at their side,” he writes. Warraich has the ability to understand how a patient is feeling, how the caregiver is feeling, and how the family is structured. He can understand that when Mrs. Douglas’ husband died, “she felt relieved.” She “had loved him and served him all her life” but she “couldn’t stand another twenty-four hours.” He contradicts the well-established stereotype of the cold, perpetually hectic physician and makes us think of doctors as more humane, fallible beings. Explaining how he once failed to resuscitate a patient, he quotes the man’s wife telling him, “You did your best.” He goes on to write, “Left with nothing to say, with my higher brain emitting only white noise, I did what my brain stem instructed me to do. I hugged her and cried.”

This book could have been an academic text if not for the numerous, oddly illuminating anecdotes sprinkled through the narrative. One awe-inducing story describes a woman on the verge of death with terminal lung cancer. The only thing she wanted was to be left alone to enjoy the Food Network show she was watching. “Some people need all the help we can give them,” Warraich notes. “But there are some who don’t need us at all, who are prepared to die as if it were the only thing they knew.” Readers should be prepared, however, to read the prose of a doctor who is occasionally unsparing in descriptive detail. One such queasy passage recounts the story of Jahi McMath, a 13-year-old girl who was declared brain dead after having surgery to remove parts of her nose and throat to help her overcome sleep apnea. The author vividly describes her degrading condition: “Her intestines started sloughing off and the only bowel movement she had for weeks was in fact the lining of her intestines coming out.”

Modern Death is a great addition to the discussion of death, in the tradition of Sherwin Nuland’s ground-breaking How We Die. More important, however, it makes a place for death at our dinner tables. It makes us realize how important it is to talk about death at times when we are happy and relaxed rather than when we are in a crisis. I didn’t know until recently that my partner does not consider someone in a vegetative state to be alive. I didn’t know that he wouldn’t like to be kept on mechanical support if he couldn’t hear, feel or communicate with the people he cares about. I learned this while eating a spicy ragu in Brooklyn and drinking my favorite Australian pinot noir.