The Cold Hard Truth About The Cosmos 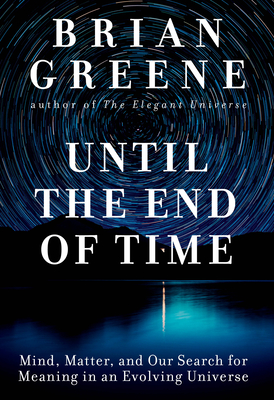 Until the End of Time

Mind, Matter, and Our Search for Meaning in an Evolving Universe

Suppose you discover that in fifty years, all of civilization will suddenly perish in a cataclysmic event. Would this change your behavior, your sense of purpose in life? What if this event were going to happen in five billion years, or perhaps 10100 years?

In his latest book, Until the End of Time: Mind, Matter, and Our Search for Meaning in an Evolving Universe, Columbia University physicist Brian Greene argues that sooner or later, indifferent forces of nature will bring an end to all of our cultural and biological creations – and that this knowledge should reshape our sense of place in the universe.

To argue this point, Greene provides a whirlwind tour of cosmological history, from the early evolution of stars and galaxies, through biological life and conscious brains, to human language and storytelling. The book’s scope is ambitious, reminiscent of the systematizing philosophers, like Aristotle or Kant. Readers of Greene’s other books will find a familiar style: accessible descriptions of difficult scientific ideas, motivated by deep philosophical questions and brought to life with vivid anecdotes and imagery. But unlike his previous work, which focused on the fundamental nature of space, time, and matter, here the motivating questions veer to the humanistic – to the issue of how we should imbue our lives with meaning.

Greene depicts cosmic history as an interplay of two forces: entropy, the universe’s inevitable statistical tendency to move toward randomness and disorder; and evolution, the competition between molecules, cells, and organisms that leads to increasingly sophisticated arrangements of matter. These forces – one toward disorder, the other toward order – appear at first glance to be in conflict, “embattled characters perpetually fighting for control of reality.” How can a universe “heading toward ever-greater disorder” give rise to “structures like stars, planets, and people?”

To answer this, Greene turns to the humble steam engine, the device that powered the Industrial Revolution and inspired the development of thermodynamics. Steam engines convert heat from burning fuel into ordered motion: water vapor heats up and expands, pushing a piston, and then cools down and contracts, pulling the piston back, and causing a wheel to turn. This transformation of high-entropy heat into ordered movement in a specific direction might appear at odds with thermodynamic mandate: order generated from disorder. But critically, the steam engine releases a large fraction of its energy as heat, radiated to a relatively cool environment. The steam engine creates internal order by expelling entropy to the environment, increasing overall entropy – a trick that Greene calls the “entropic two-step.”

How can the steam engine help us understand the intricacy of biological life? The relationship is direct: “You are a steam engine.” You extract energy stored in the chemical bonds of food, which your body uses to maintain internal order and orchestrate complex behavior, while expelling high-entropy waste in the form of radiated heat. You dance the entropic two-step, converting fuel into organized movement and heat, just like a steam engine. Complex systems from cells to human societies can maintain their structure over time without violating the laws of thermodynamics – but only while there’s enough “life-giving low-entropy fuel” to burn through. The observation that we’re fuel-burning, entropy-increasing machines implies that life may not be able to survive indefinitely.

After providing a physicists’ perspective on life and evolution, Greene turns his attention to the human mind, and to speculative debates about consciousness and human evolution. While Greene remains an expert storyteller, with an engaging and balanced account of the major theories at play, the questions here feel less connected to the book’s overall thrust. Why does a book about the demise of civilization pause to ask if we can understand the color red?

In later chapters, Greene returns to physics, and paints a chillingly bleak picture of the universe’s long-term future. The first cosmic obstacle for humans—if we don’t destroy ourselves first—will be the burnout of the sun in 5 to 6 billion years. In the sun, gravity pulls hydrogen atoms inward, where intense heat and pressure lead to nuclear fusion, releasing the energy that powers life on earth. To Greene, this is another entropic two-step: a system that maintains internal spatial structure by constantly releasing energy as heat. But its fuel supply of hydrogen will run out, and eventually the sun will burn down to a “dark frozen orb.”

Maybe humans will hitch a spaceship to another, more hospitable home. But the picture gets bleaker. Planets lose their energy as they emit gravitational waves, and eventually collapse into their stars. Stars burn out and fall into black holes. Even the black holes gradually fade away, slowly losing energy through radiation. The universe becomes increasingly dark, diffuse, and desolate, without the fuel needed to sustain life and thought.

I could go on – and Greene does, with a meticulous accounting of all manner of exotic scenarios at the fringes of space, time, and known physical law. But the conclusion is clear: any being that requires energy to fuel its internal structure and processes will be hard-pressed to survive in the far future universe. Human civilization has an expiration date. Our existence is, in Nabokov’s words, a “brief crack of light between two eternities of darkness.”

What should we make of this insight? After arguing convincingly that everything will eventually perish, Greene turns only briefly to the matter of how this knowledge should impact our lives. As humans, we have a deep-seated affinity for the eternal, a desire to transcend our limited experience. But modern cosmology quashes any hope of real permanence. Instead of looking to an indifferent universe, Greene argues, the only place we can look is within ourselves, to find our own meaning.

Did we really need to painstakingly suss out the 10100-year future of the cosmos to convince ourselves of the absurdity of human existence? The big ideas at play here are not particularly new. Lord Kelvin predicted the “heat death of the universe” in the 1850’s, and a few decades later, Nietzsche explored the ethical and psychological implications of abandoning a sense of absolute purpose. Given the more imminent threats to our civilization – a warming planet, species-destroying weapons harnessing the same nuclear reactions as the sun – we don’t have to look to the distant future to appreciate our own precariousness.

Whether or not the reader is shaken by the ethical implications of Greene’s tour of the cosmos, the tour itself is undeniably captivating. Through his palpable excitement, Greene shows us how he has found his own meaning in the thrill of exploring an indifferent but elegant universe. Instead of lamenting our inevitable demise, we should celebrate the fact that we have these thoughts, appreciate that “our moment is rare and extraordinary.” For life and thought to exist at all, even briefly, is miraculous.

Ben Deen is a postdoctoral fellow in systems neuroscience at The Rockefeller University.