The Extraordinary Dramas and Dilemmas of Transplant Surgery 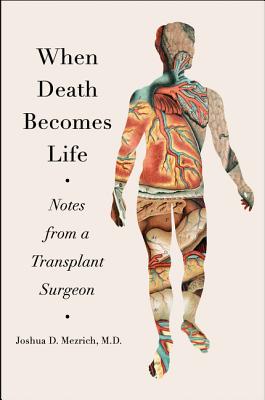 Notes from a Transplant Surgeon

Dr. Joshua Mezrich has an unorthodox perspective on death. His career in transplant surgery has engendered a unique mentality that views one individual’s death as a “starting point” to prolong another life. When Death Becomes Life, is an ode to the modern trailblazers of organ transplantation. Intertwined historical and personal anecdotes collectively contextualize the birth of the remarkable, almost scifi-esque field. His vivid (if a bit redundant) accounts of the administrative logistics and surgical technicalities involved in liver, kidney, skin, heart, and pancreas transplants whet the reader’s appetite for more empathic patient stories in later chapters, which reveal myriad ethical dilemmas and humanize the initially detached narrator.

Given his extensive medical training and current role as associate professor at University of Wisconsin School of Medicine and Public Health, Mezrich is no stranger to the exacting world of academia. He suspects his voracious consumption of literature as an adult is a product of the “two-books-a-week rule” strictly enforced throughout his childhood. His fond recollections of the book-club style discussions with his parents and two brothers reflect a deep appreciation of the power of language and storytelling. It is also apparent in his candid prose, complemented by carefully selected quotations from esteemed authors at the start of each chapter.

Reminiscent of Siddhartha Mukherjee’s The Emperor of All Maladies in style and scope, When Death Becomes Life represents Mezrich’s attempt to “…use my coming-of-age as a surgeon and my patients’ stories to illustrate the drive and commitment of transplants’ pioneers…to make the story of transplantation accessible to those outside the field of medicine.” His at times excessively thorough commentary about medical milestones such as the development of immunosuppressant drugs indicates profound gratitude for the opportunity to practice transplant surgery. It isn’t until the second half of the book that we witness a refreshing departure from Mezrich’s diary-like recordings of his arrogant and dispassionate demeanor as a young medical student. There are no more graphic –if compelling– depictions of bloody O.R. mishaps. Instead, we are treated to poignant encounters with patients that continue to mold the author’s approach to transplantation and all that it entails. The evolution of Mezrich’s sensitive bedside manner culminates in his internal oath to treat all of his patients, whether dead or alive, with the same quality of care and compassion.

One anecdote in particular, about a colleague-turned-patient named Nate, provides the first evidence of the author’s softening. Mezrich simply could not tolerate sitting through another liver selection meeting denying Nate a new liver, despite his life ambitions and potential. Chronic alcoholics on the brink of death were given priority over Nate’s less acute but ultimately fatal genetic condition. Unable to reconcile this heart-wrenching hierarchy, Mezrich manages to manipulate the system in order to treat Nate. This experience introduces one of the most difficult ethical quandaries of transplant surgery: determining individuals’ rankings on donor organ lists. While there is no straightforward guide to the equitable distribution of donated organs, early transplant procedures were rife with explicit bias. Regrettably, up until the 1990’s, skin color was a major consideration in terms of both donor and recipient.

Amid growing social unrest incited by the pandemic and escalating racial tensions, When Death Becomes Life provides an alarming view on the pervasiveness of racism, even in the operating room. The realm of health care and medicine, Mezrich reminds us, is by no means immune. Black donor candidates and recipients were excluded from the first heart transplant performed by South African surgeon Christiaan Barnard in 1967. Mezrich writes, “Barnard had promised his team that his first donor would be white—these were the days of apartheid in South Africa…they didn’t want the negative press that would come with the very first brain-dead donor being black.” When Death Becomes Life reveals the extent to which racism also defiles perhaps unexpected areas, like the pursuit of biomedical science.

Skin color is no longer a (lawful) factor in organ donation as it was in Barnard’s day, but the present criteria based on degree of sickness are not without flaws. Patients in need of liver transplants, for instance, are assigned “model for end-stage liver disease” (MELD) scores according to enzymatic lab tests. This system ensures that patients on the verge of death will receive transplants before those with higher probabilities of survival. As Mezrich describes the harsh realities of this scale, I couldn’t help but think about my maternal grandfather, who succumbed to an inherited liver disease years ago. He was deprived of a healthy liver because of his relatively modest MELD score — a seemingly preventable loss.

The MELD score conveys the moral dilemmas involved in navigating this problematic system from the perspectives of both patients and surgeons. The vast majority of liver disease is a direct consequence of alcoholism. Mezrich delicately addresses his obligation to refrain from judgment in treating such patients, simultaneously acknowledging the difficulties associated with transferring a perfectly healthy organ into a body with a very questionable fate. His frustration lies not with the addicts themselves, but the lack of protocols in place to address the mental addiction along with the failing organ. The author’s proposals to realistically incorporate measures such as commitment to sobriety and likelihood of repeated liver failure into MELD scores does suggest that improvements may be on the horizon. I still have difficulties detaching from my personal resentment about the fate of my (far from alcoholic) grandfather, a sentiment that good transplant surgeons simply can’t afford to harbor.

When Death Becomes Life seamlessly weaves Mezrich’s musings on his predecessors’ tenacity into sincere portrayals of the relentless emotional exhaustion characterizing his chosen occupation. The poignant parallels he draws between optimism for ongoing transplant advancements and genuine hope for a future in which racism is neither institutionalized nor otherwise entrenched continue to resonate. Michaela, a white female liver recipient initially “startled” to find her donor was Black, was interrogated by reporters on how it felt to get a liver from a Black man, “…a ‘bad guy,’ … who was in prison.” Mezrich relays her eloquent response: “These organs that grew up together in the small, white town of Spring Green weren’t bothered in the least that a liver from a young black man from Rockford who had led a troubled life, even spent time in jail, had joined them.” The now intimate relationship Michaela shares with her donor’s mother serves as living proof that humanity can and does overcome racial division.

The grandeur that people like Mezrich and Michaela bestow upon life, whether that life is coming to an end or undergoing a revival, encapsulates what I perceive as the driving force sustaining Black Lives Matter. During a time when discriminatory thinking similar to that of Dr. Barnard, a proponent of eugenics, threatens to divide the country forever, we have a collective responsibility to embrace science. The kind of science that seeks clarity and truth. The kind of science that enables organ transplantation. The kind of science that allows death to become life.

Paige Winokur is a graduate student studying the neuroendocrinology of multiple sclerosis at Rockefeller University in New York City.