A Sci-Fi Lover’s Guide to the Galaxy 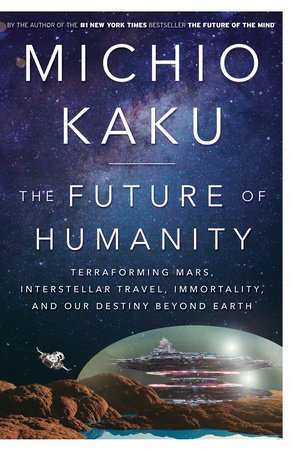 The Future of Humanity

Terraforming Mars, Interstellar Travel, Immortality, and Our Destiny Beyond Earth

Such is the uplifting tone Michio Kaku sets in the prologue to The Future of Humanity. “Extinction,” he reminds us, “is the norm.” One day humans will be forced to leave Earth.

Yet in this grim certainty Kaku finds not desperation, but wild, exuberant possibility.

A theoretical physicist at the City University of New York and author of nine best-selling popular science books, Kaku shows deep knowledge and passion for space exploration. He introduces the reader to the innovators and technological advancements that will make it possible for humanity to “live and thrive in outer space.”

The Future of Humanity takes us on an extraordinary extraterrestrial journey. In the first part of this 400-page tour-de-force, Kaku discusses our progress towards a permanent Moon base and colony on Mars. He then envisions colonies beyond our solar system enabled by ambitious “fifth wave” technologies (light sails, ion engines, ramjet fusion and antimatter starships). Finally, he contemplates how we might modify our bodies to survive the journey to distant stars.

Kaku begins with the history of space exploration, noting that “the journey to the stars begins with the very first rocket,” which flew for 2.5 seconds in 1926. He then brings us all the way to the present, highlighting important milestones along the way.

We are now experiencing a revival of interest in space travel, along with the innovation, and funding to make it possible. “NASA has finally regained its focus,” Kaku writes. “Daring astronauts are being replaced by dashing billionaire entrepreneurs.”

Their next goal is simple: with a permanent base on the Moon as a “stepping-stone,” Mars is the final destination.

Kaku’s enthusiasm for the Mars colony manages to make the planet’s barren, desert landscape seem enticing. He envisions geological wonders sculpted out of ice, dust and sand. Unlike the ancient meteor craters on Earth, lost forever due to tectonic activity, on Mars we would be “gazing at a landscape frozen in time.”

The people who will man the first mission to Mars are “perhaps learning about astronomy in high school” at this very moment, unaware that they will be “taking a historic step toward realizing the goal of making humanity a multiplanet species.”

The first colony on Mars will have the important task of terraforming this new world – making it more Earth-like. Kaku explains that humans will have to heat up the atmosphere “so that liquid water can flow on the Red Planet for the first time in three billion years.”

Jump-starting the terraforming process could include introducing methane into the atmosphere to induce a greenhouse effect, and sending satellites to concentrate sunlight onto the ice caps. The most radical approach, proposed by Elon Musk, involves detonating hydrogen bombs above the ice caps.

Kaku goes so far as to envision daily life on Mars — even suggesting that sports would need to be redesigned due to differences in gravity and atmospheric pressure, predicting that a “new Martian Olympics may emerge.”

Our path to outer space may involve intermediate colonies along the way. Kaku imagines that we will “build a network that would connect the planets as the railroad connected American cities.” Asteroids might become rest stops for miners and explorers, as they contain minerals which are valuable and rare on Earth. Comets in the Oort Cloud at the outer edge of our solar system “may become our stepping stones to other stars.”

This is where Kaku’s writing and storytelling truly shine: contrasting Earth to Venus and Mars, one “devilishly hot,” the other “frozen solid”; describing our Moon and the moons of gas giants Jupiter and Saturn, with geysers spewing water, thick atmospheres, ponds and landmasses. Kaku takes his time to recount their origins and geologic history while putting a pin in the growing roadmap of humanity’s interstellar voyage.

With recent innovations in nanotechnology, humans may one day utilize ultra-lightweight materials to build colonies in space. With advances in artificial intelligence, we may soon see the rise of robots that can learn, explore new terrains and establish the colonies for us.

Efforts are also being made to digitize the human brain by mapping out every neuronal connection. “Would this mean that we can upload consciousness into a computer and send it to the stars?” Kaku wonders.

Kaku’s vision of humanity’s future among the stars is intoxicating and exciting, but there are times when the boundary between fact and fiction becomes blurred.

He often references famous science fiction books and movies to hook the reader, using themes from Isaac Asimov’s FoundationTrilogy and Olaf Stapledon’s Star Maker to help us envision interstellar empires. He also highlights elements of these books that might one day become reality, addressing requirements for a warp drive engine or a wormhole starship and imagining that we could one day leave our universe and “enter another, younger one.”

Using science fiction is a good way to capture the reader’s attention, but relying on it so heavily neglects scientific reality. Kaku often gets caught up in his own excitement, failing to stop and explain the basics. We are never told, for example, why Mars was chosen as the location for our colony; we are forced to gather information and make assumptions as we go. He also never states that wormholes are only a theoretical concept, yet he relies on them for a large portion of the book.

Artificial intelligence, self-replicating and self-aware robots are skimmed over without going into details. Kaku presents the science fiction concepts that “these machines may rebel against their human creators” as the only concern, but dismisses it instantly by saying we will have time to prepare and “add a fail-safe chip.” This is the first moment when The Future of Humanity loses its stride.

Kaku encounters the same problem while addressing immortality and transhumanism (modifying or enhancing our bodies). He presents the possibilities and potential with excitement, but misses numerous opportunities to slow down and address concerns. Kaku continues full speed ahead and ends on a similar note: the technology is not here yet so no need to worry.

And while he doesn’t skimp on crediting historical figures for their achievements, 94% of the pioneers Kaku mentions are male. The Future of Humanity stumbles where it could soar: there are plenty of female scientists to acknowledge – Margaret Hamilton, Katherine Johnson, Nancy Grace Roman, to name a few. Trimming the number of topics and focusing on the real science would have led to a more comprehensive book with a better representation of individuals who have already shaped our journey to the stars.

Still, Kaku’s passion, enthusiasm and expertise are palpable. He captures and keeps the reader’s attention. He covers a broad range of topics with a charismatic and optimistic voice, which ultimately leaves the reader feeling hopeful and excited about space exploration.

Once we build and board our spaceships, where will we go? There may be as many as twenty billion Earth-like planets in the Milky Way. Think of that the next time you look up at the stars, Kaku writes, and “you will never see the night sky in the same way again.”

Milica Bulajić is a Ph.D. candidate in Developmental Genetics at the Biology Department of New York University. She is already packing her bags for her first trip to Mars.