The Ghost of Pandemics Past 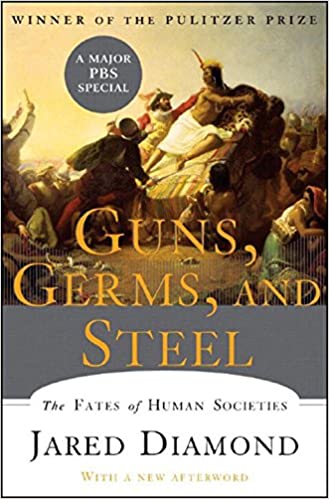 The Fates of Human Societies

A new coronavirus has spread faster than we could have imagined any health threat could. On February 11, the WHO announced a name for the disease associated with the virus — COVID-19. One month later it was officially a pandemic. Lockdowns have been introduced and angst has settled into every home. People fear for their health and their lives, worry about their loved ones, and are uncertain about the future.

But I knew, at the onset of the pandemic, that it was not the first time the spread of a novel virus paralyzed society. I remembered hearing about SARS from the news when I was a child. I remembered reading about bubonic plague — better known as the Black Death — in school. Could lessons from past plagues help us grasp the ongoing crisis?

I reached for a book all about connecting the dots between past and present: UCLA historian Jared Diamond’s Pulitzer Prize-winning classic, Guns, Germs, and Steel: The Fates of Human Societies. A treatise on how geography shaped human history, it is Diamond’s best-known popular science book. Released in 1997, Guns, Germs, and Steel became an international bestseller translated into 33 languages, and was both widely praised and widely critiqued for its novel telling of human history.

Diamond’s suspenseful journey through the history of mankind, jam-packed with scientific evidence and anecdotal observations, tells a convincing story of how geography has shaped history for thousands of years. At the heart of his argument is a chain of factors that stem from pre-existing natural conditions: availability of plants and domesticable animals, food production, settlements, spread of germs and development of weapons, conquest of other societies, formation of states, development of writing and technology. This chain slowly unwinds over a 500-page tale that is at times dead-serious (“knowledge brings power”) and other times humorous (“let’s get back to considering our own selfish interests: … killing the damned germs”).

Years of scientific investigation into Diamond’s theories have bolstered some of his claims while raising doubts about others. But when I reached page 195 I was in for a revelation. Diamond had a sobering message for us today: throughout human history, virus outbreaks kept coming and going. They are a natural consequence of livestock domestication and the transfer of germs between animals and humans. In fact, they are also a result of the ingenious adaptation of microbes that develop new ways to spread.

We tend to think about viruses as goal-oriented agents that are out there to sicken and maybe kill. This perspective is strengthened in an epidemic (or a pandemic), when we see a horrifying number of people infected every day. From our point of view, we have to quickly contain the spread of the virus and kill it – before it kills us.

From the virus’ point of view, which Diamond lays out in detail, the story is very different. Rather than killing us, the microbes have been developing unique strategies (or “dirty tricks,” as the he puts it) to keep us as their hosts and spread effectively to as many as possible. Some viruses wait to be transmitted to another host, like salmonella bacteria waiting to be eaten. Others take a ride in the saliva of insects, like the parasite that causes malaria. But there are also those that will cleverly make the host accelerate transmission, for example by causing them to cough or sneeze. How quickly the host shows symptoms also affects how many other potential hosts the germs can reach.

The “dirty tricks” of the coronavirus that causes COVID-19 look like a perfected product of many years of natural selection and adaptation: it easily spreads from one host to another through droplet transmission, it shows delayed symptoms, which prolongs the time of a potential infection with other future hosts, and it eventually causes severe coughing, which significantly speeds up the transmission.

The cleverly adapted coronavirus was not the first (nor will it be the last) to cause a viral epidemic. The domestication of livestock put humans in contact with novel microbes, which can develop in animals and mutate to infect humans, just as the novel coronavirus might have mutated from bats. Among such “deadly gifts of our animal friends,” Diamond lists measles, tuberculosis, and smallpox (from cattle) as well as flu and pertussis (from pigs). With the rise of agriculture 10,000 years ago, we put ourselves at increasing risk for regular epidemics.

But if “the rise of farming was … a bonanza for our microbes, the rise of cities was a greater one,” Diamond says. Indeed, the outbreaks have accelerated with the number of centralized agglomerations a few thousand years ago, starting with the smallpox epidemics in 1600 B.C.E. and followed by outbreaks of mumps, leprosy and polio. Infectious diseases thrive in densely packed populations, as we can see from the current pandemic, which hit the most densely populated metropolis in the US – New York City – particularly hard.

Finally, Diamond reminds us that epidemics shape the course of history. In the past, the spread of infectious diseases made it easier for some societies to conquer others. When Spaniards arrived to conquer the Aztec Empire in the 16th century, germs did the job for them: instead of battling with weapons, Europeans brought infectious diseases that Aztecs were not immune to. Malaria and cholera outbreaks in tropical countries, in turn, prevented Europeans from colonizing New Guinea or Africa until much later in history. More recently, the infectious spread of AIDS, caused by the HIV virus transmitted and mutated from chimpanzees in the 1950s, changed the social and economic landscape in Africa, triggering poverty and halting economic growth.

With this and many other examples, Diamond gets across an important message: epidemic outbreaks leave behind changed societies. The change can be in culture or politics, or in human behavior. Now, in the middle of COVID-19 pandemic, we might be in for another big turn. Are more jobs going remote? Is education moving online for good? A global digital revolution might be just around the corner, as employers and educators forecast that many distancing solutions implemented during the current crisis will become a natural part of the post-COVID world. Many are looking forward to this change, expecting more flexible hours and accessible, low-cost solutions for working and learning.

But in the shadow of the innovative, digital transformation, there might be another, more insidious change. The move towards remote solutions has exacerbated the vulnerabilities of disadvantaged groups. Among those are low-income families that might lack the access to computers, internet, or both, preventing them from keeping up with the interconnected world. This shows that the history is about to take a sharp turn – but we can still slow down and make the changes in a mindful way.

According to Diamond, “one has to understand the enemy in order to beat him.” The enemy might be the virus. It might also be the post-pandemic change. I guess we should be careful with both.

Agata Bochynska is a postdoctoral researcher in developmental science at NYU, with a background in psychology, linguistics, philosophy, and cultural science. She investigates what makes us uniquely human and is fascinated with how humans evolved to become who we are now.