Navigating The Minds of Animals 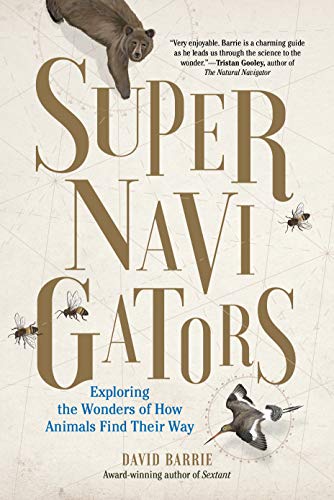 Exploring the Wonders Of How Animals Find Their Way

The Sistine Chapel and the Mona Lisa. Plato’s Republic and Einstein’s Theory of Relativity. The Great Pyramids of Giza and the Empire State Building. With the help of our assuredly superior brains, we have achieved some remarkable feats.

But nervous systems first evolved to facilitate a more mundane process: movement. The ability to react to information from our senses by moving through the world is a crucial but often overlooked trait, enabling us and other animals to scrounge for food, find mates, and avoid danger.

In Supernavigators, David Barrie invites readers to consider the navigation strategies that all animals — ourselves included — have adopted to live and thrive in an ever-changing world. From the foraging expeditions of tiny desert ants to the global voyages of sea turtles, Barrie surprises and humbles readers by illustrating the astonishing ways that animals navigate. He also suggests that the cognitive demands of navigation may have facilitated humanity’s many remarkable achievements, even though we are at best mediocre navigators compared to other species.

In one stirring example, Barrie recounts the 240-mile journey undertaken by a sheepdog named Pero, who found his way back to his previous owner after being adopted by a new family. As a real-world version of Disney’s The Incredible Journey, this story highlights the navigational prowess of man’s best friend.

In contrast, our own inborn navigation ability is shockingly underdeveloped. Even tiny insects can follow arrow-straight paths back to their nests from as much as a mile away — an impossible task for you and me. As Barrie astutely notes, we “may in some respects be more gifted than our fellow creatures, but in others they are plainly superior to us.” Given these impressive navigational skills, he asks readers to consider the other ways in which animals may be our betters.

Barrie is an avid sailor and a Fellow of Britain’s Royal Institute of Navigation. In his first book, Sextant, he details the tools and techniques used by early human seafarers. And although Barrie is not a scientist, his research on animal navigation is thorough. By conducting extensive interviews and participating in field experiments with leading ethologists, he has gained an expertise that the reader quickly comes to trust. Prolific annotations decorate each chapter, highlighting major scientific publications related to each topic.

In many ways, Supernavigators benefits from Barrie’s non-science background. Popular science writing often suffers from a kind of detachment, where readers learn about the discoveries of great scientists, but not about the scientists themselves. Barrie expertly captures the process of science, and colorfully illustrates the people devoted to doing the experiments — including Eric Warrant, a physiologist studying Australia’s intrepid bogong moth. These moths “pinpoint a tiny mountain cave from over a thousand kilometers away, crossing terrain they have never crossed previously,” Warrant tells the author. “They do all this at night, fueled by a few drops of nectar… Don’t even ask an engineer if they could build a robot equivalent!”

Warrant’s respect for the bogong continued to grow as his research group conducted experiments to determine how the moths find their way. The scientists placed the moths in a laboratory flight simulator by attaching them to fine wires suspended from a mechanical arm —unaware that the moths could use the device as an inadvertent visual landmark. For years the humble bogong outsmarted Warrant and his team — a stark reminder that we don’t give the intelligence of animals enough credit.

Eventually, Warrant and his colleagues corrected this mistake. They discovered that bogong moths use Earth’s magnetic field as a reference to set a course toward some distant visual landmark, just as a “human helmsman does when steering a compass course at sea.” Barrie’s description of Warrant’s failed experiments captures the essence of doing science — and the perseverance it requires. Happily, Supernavigators is as much about how we study animal behavior as it is about the animals themselves.

Barrie organizes the book according to the various navigational strategies that have developed throughout the animal kingdom. With lucid and uncomplicated prose, he introduces readers to sometimes tricky concepts, including homing, dead reckoning, and map-and-compass navigation.

But at times the sheer number of examples undermines Barrie’s organizing principle, leaving the reader lost in a sea of anecdotes. And while the biological importance of navigation is self-evident, Barrie’s decision to back-load his larger points detracts from the significance of the examples along the way. Later chapters explain why we should care about animal navigation, but these sections feel preachy and drawn-out.

Nevertheless, Barrie makes a surprising and audacious point near the end of Supernavigators: that navigational ability and cognitive capacity are two sides to the same coin. In other words, our ability to understand abstract ideas may require us to imagine those ideas in spatial terms.

This idea, he says, is borne out in everyday language, which is filled with spatial metaphors: “We talk about ‘being on top’ of the world or ‘going downhill’, we ‘look into things’ and have ‘close friends’ or ‘distant relations’.” As Barrie puts it, the prevalence of spatial metaphors “may well reveal something profound about how our minds work.” His argument is convincing, and echoes the theories of a number of leading neuroscientists.

By extension, understanding animals’ navigation abilities can give us an idea about what their “internal worlds” may be like. In this regard, the breathtaking triumphs of animal navigation described in Supernavigators give readers a window into the minds of our fellow creatures.

At a time when human activities are ushering in a biodiversity crisis, Supernavigators invites us to step back for a moment to reflect on the cognitive abilities of Earth’s fauna. And though we can all agree that moths probably aren’t pondering Plato or Aristotle, their remarkable way-finding skills may suggest that more is going on in their tiny brains than we once thought.

Tim Currier is a graduate student at New York University. He studies how fruit flies combine information from many senses to make navigational decisions.