The Pandemic Dress Rehearsal Where Everything Went Wrong 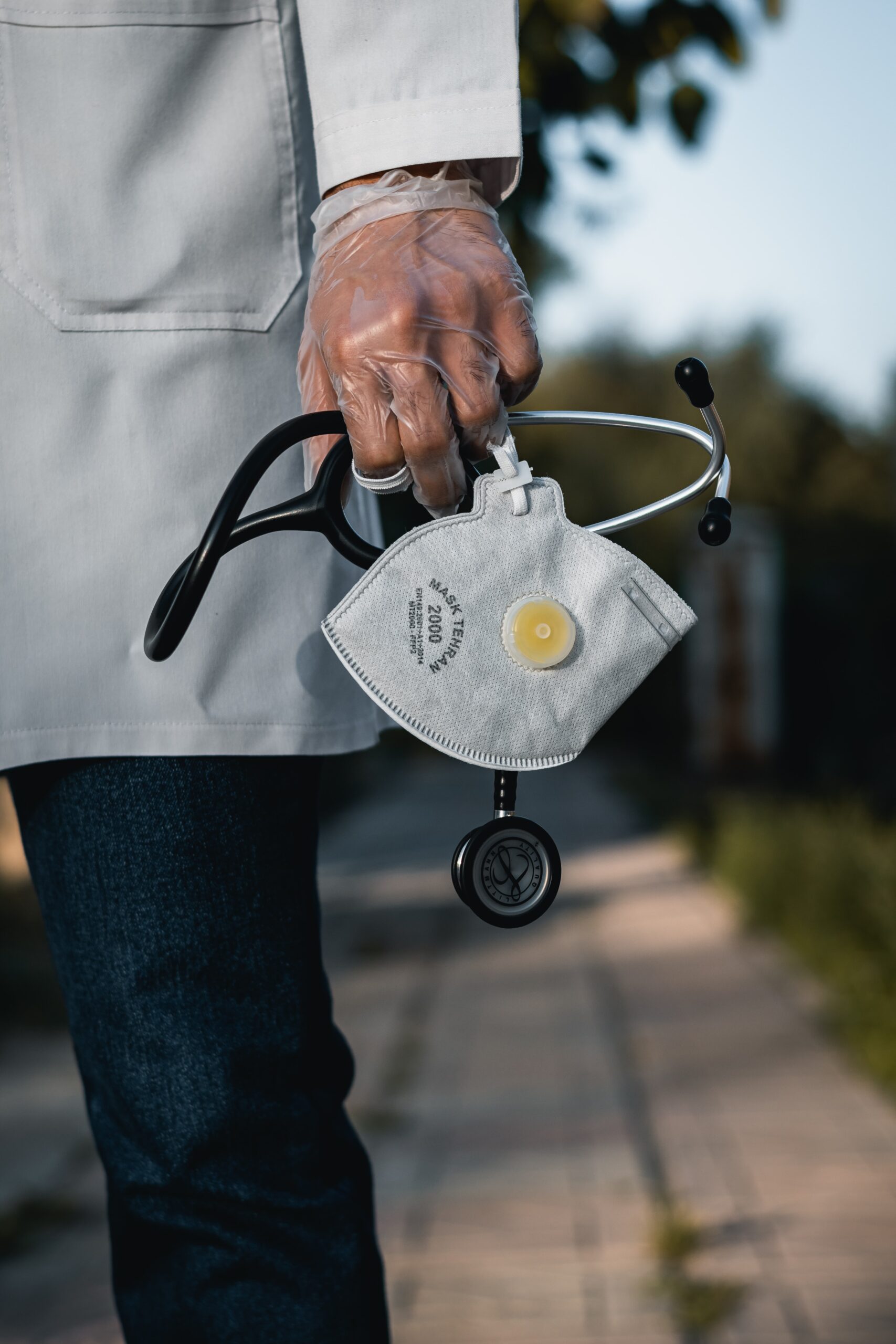 In late March 2020, a wave of new Instagram accounts flooded the app, signaling the arrival of the next big social media trend. It was not another viral dance challenge or banana bread recipe. Instead, healthcare workers in the richest city in the richest country on Earth took to social media to plead for personal protective equipment.

“I’m a physician at a hospital in NYC and THIS IS THE `PPE’ I WAS JUST HANDED for my shift,” Dr. Rachel Meislin wrote. “Our federal government has completely failed its health care workers. #GetUsPPE”. The photo showed a New York Yankees-branded `adult rain poncho.’ One size fits most!

My medical school classmates catapulted themselves into action. A volunteer task force materialized overnight, coordinating everything from childcare for ICU nurses, to food delivery for janitorial staff, to 3D-printing, assembly and delivery of face shields. In the midst of the humanitarian frenzy, I found myself put in charge of an Instagram account tasked with soliciting PPE donations from the vast, cold, anonymous internet. I had never run a social media account in my life, nor worked on a public health campaign. I had not left my apartment in days, alternating rounds of exercise with showers until I was bone-tired enough to sleep through the ambulance wails.

But to my utter surprise, donations poured in. As of today, the account has raised over 86,000 items; others like it have raised a quarter of a million. The hashtag #PPE has been used over 460,000 times.

If I am supposed to feel relief that our digital white flag worked, that relief has never come. Instead, what has settled is a deep, gnawing unease with the knowledge that our federal government was so ill-prepared to combat this pandemic that my classmates may have actually made a difference. How could this have happened?

In this light, revisiting Arthur M. Silverstein’s Pure Politics and Impure Science: The Swine Flu Affair is like gazing in a funhouse mirror. The deadly pandemic never arrives, but everything still goes wrong: shortages in vaccine production, logistical failures in distribution, and a rare complication known as Guillain-Barre Syndrome. Silverstein, a professor of immunology at Johns Hopkins, spent 1976 as a congressional science fellow on Senator Edward Kennedy’s Senate Health Subcommittee. His crisply analytic, first-hand account of the “swine flu debacle of 1976” juxtaposes its political and scientific missteps in service of understanding events that “unfolded inexorably like a Greek drama.”

But read today, as we await a SARS-CoV-2 vaccine and as case counts explode across the United States, Pure Politics is eerily prescient. Some of those political and scientific missteps directly parallel ongoing failures in the current pandemic response. More troubling are the missteps of 1976 that we have not yet had the chance to repeat. It is impossible to read the latter chapters of Pure Politics, particularly those concerned with vaccination, without hearing a grim warning. The forces which led to failure in 1976 — the forces Silverstein calls “inexorable”—feel modern and alive in today’s unfolding dynamic between science and public policy.

The first prickle of recognition comes at an emergency meeting on February 14th, 1976. Government public health officials downplayed the pandemic potential of a newly discovered influenza strain, as if “the very mention might bring the reality closer.” Much like the 2018 disbanding of the National Security Council unit responsible for pandemic preparedness, the CDC of 1976 had seen its budget slashed under the Nixon and Ford administrations. But unlike today, the deadly 1918 pandemic still loomed in the collective imagination. In subsequent meetings, health officials concluded a mass vaccination program was needed. President Gerald Ford embraced the program flanked by Jonas Salk and Albert Sabin, heroes of the polio campaign. The horse was out of the barn.

In the 1976 iteration, the federal government threw its full weight behind pandemic preparedness. Yet in 2020 it claimed the virus “would go away” one day before WHO declared a global pandemic. What is the shared driving force behind these two polar opposite outcomes? It is the central tendency for policy, even public health policy, to increasingly relegate science to a secondary role in favor of political and economic considerations. In both iterations, the virus emerged in the spring before a presidential election. Ford’s critics were assailing him as indecisive and weak. Silverstone divulges that the White House believed the National Influenza Immunization Program (NIIP) would put this criticism to rest, aiding Ford in a difficulty primary against Ronald Reagan. Having hitched his reelection wagon to the economy, Trump was loath to issue stay-at-home orders that might have saved thousands of lives.

It is not simply that political and economic priorities often outweigh scientific ones in times of crisis. Pure Politics makes it clear that scientific uncertainty, and probability in particular, is a reoccurring stumbling block when translating science into public policy. In 1976 internal discussions, the CDC estimated the likelihood of a pandemic at two to twenty percent, though they emphasized the imprecision and subjectivity of this number. Once the decision was made to act, however, language changed — the pandemic “was coming and it would be as bad as 1918.” This linguistic shift reflected an assumption that the government needed to defend its decision to act rather than reflecting the scientific evidence.

When the pandemic failed to arrive (a biological mystery well-deserving of its own captivating chapters), public confidence in the program plummeted. A Gallup poll in August 1976 revealed only 53% of Americans intended to get the swine flu vaccine, though ninety-three percent knew about the NIIP. How might this have changed had the government’s messaging framed the pandemic in probabilistic, rather than deterministic terms?

When political and scientific concerns of the NIIP collided again in October, the stakes were higher. After 1 million doses were delivered in the first ten days, three elderly vaccine recipients died suddenly in Pittsburgh. Ten states suspended the program. Within days, scientists definitively demonstrated it was a coincidence; a certain number of temporally related deaths were expected given the scale of the immunization program. In fact, when appropriately adjusted for size, death rates were lower in the vaccinated population than the unvaccinated. It didn’t matter. Public and political support for the program sagged further yet.

In November, the CDC discovered a cluster of Guillain-Barre Syndrome cases, a rare, immune-mediated nerve disorder characterized by ascending paralysis. This time it was not a statistical anomaly; CDC analysis showed the relative risk of GBS in vaccine recipients was twelve times that of the normal population.1   A second backlash ensued, in which the media wondered aloud if GBS was a new epidemic  and if it could be “caught” from those already infected.2 An immunologist himself, Silverstein is particularly irked by this brand of misinformation. The entire vaccination program was suspended indefinitely on December 16th.

What can we learn from these inexorable events that unfolded like a Greek tragedy? Silverstein correctly diagnoses the what — tension between politician and scientist — as the dominant dynamic hashed out time and time again. “The layman (and the politician) somehow persist in their belief that Science deals in absolute and immutable truths, and consequently they are repeatedly frustrated when scientists testify on all sides of important national issues,” he concludes. But he fails to provide a why — to adjudicate how we might improve this working partnership for the public benefit. In the throes of yet another record day of COVID-19 cases, I flipped through the Appendix hungry for a list of recommendations. There was none.

How might the risk-benefit calculus of the Pittsburgh deaths and the Guillain-Barre cases have played out differently had swine flu indeed resurfaced, and rampaged across the country killing citizens? This is not a mere hypothetical. Operation Warp Speed, the federal government’s COVID-19 therapeutics program, aims to deliver 300 million doses of vaccine by January 2021, according to the Department of Health and Human Services. Such an achievement would be a six-fold increase in the number of vaccine recipients compared to the NIIP of 1976. There is a high statistical likelihood that a similar scenario will follow: an unexpected complication, relatively improbable in any one individual, brought to the surface by massive numbers of people receiving the vaccine.

Public health experts are already fighting a wave of anti-science and anti-vaccination sentiment. Social media spread the word of New York City’s PPE crisis, but so too it spreads misinformation. A recent poll found that only 49% of Americans plan to get a COVID vaccine. What if the Pittsburgh deaths had been posted to Instagram before it was known they were coincidental? How might the media gird itself against the temptation to sensationalize? How can our public health officials preemptively address this?

What is clear from both Silverstein’s analysis and today’s unfolding horror is that the public’s concept of science is in desperate need of an overhaul. Science is a way of thinking — not any one set of facts or any single outcome. When a life-threatening emergency demands action, those charged with answering the call may be tempted to discard this distinction. Silverstein calls out this temptation: “No matter that the future might show [the scientists’] predictions to be wrong; most of today’s decisions must be made today and cannot await tomorrow’s new facts and insights.”

Yet he stops short of offering a way to reframe the relationship between science and the public. A first step would be to train the public to reject the false dichotomy that a SARS-CoV2 mass vaccination program will either be a frictionless, resounding success or a failure unworthy of their participation. The current pandemic compels us to see Silverstein’s argument to its logical end: if we follow scientific principles, then our pursuit is virtuous, even if still imperfect — as it was in the swine flu debacle. This framing does not excuse the many failures of 1976, nor deny the suffering of those afflicted by a devastating neurological complication. Rather it frees the public to value the scientific process for what it is — deliberate, careful, cumulative — and perhaps restore their trust.

1 In absolute terms, this amounted to 17 deaths attributed to GBS among the vaccinated.
2 GBS is an immune-mediated reaction against one’s own nerves; it is not infectious. This was well-known in 1976.

Geena Ianni is a Tri-Institutional MD-PhD student in New York City. She is currently completing her PhD at Rockefeller University where she studies the neuroscience of social behaviors. To donate PPE, contact @ppeforfrontlinersnyc on Instagram.