The Secret to Better Medical Care? Be A Man 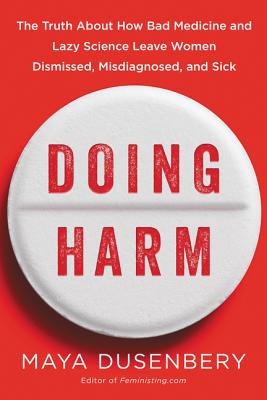 The Truth About How Bad Medicine and Lazy Science Leave Women Dismissed, Misdiagnosed, and Sick

Immediately after giving birth to her first child, Serena Williams couldn’t breathe. Because of a history of bloodclots in her lungs, she knew what was coming. Gasping for breath, Williams grabbed the nearest nurse and said she needed a CT scan and a blood thinner right away. The nurse thought Williams was high on pain medicine and didn’t take her seriously. The same thing happened with a doctor. Due to this delay in treatment for a perfectly treatable problem, Serena Williams, a world-famous athlete, almost died in one of the world’s best hospitals.

Similar stories echo throughout Maya Dusenbery’s book, Doing Harm: The Truth About How Bad Medicine and Lazy Science Leave Women Dismissed, Misdiagnosed, and Sick. The book recounts how the healthcare system fails women through well-placed anecdotes interwoven with statistics and history of medicine. Dusenbery first introduces us to the “knowledge gap” and the “trust gap.” Then she dives deep into the specific illnesses that are especially affected by these systemic disparities.

Dusenbery, an executive director at Feministing, arrived on the topic through her own battle with illness. When she was diagnosed with rheumatoid arthritis (RA), she realized that medical research on the disease was insufficient. “As a feminist writer,” she writes, “I was inclined to think that this state of affairs might have something to do with the fact that women make up more than three-quarters of those with autoimmune diseases.”

She was right. Because of a long history of blaming diseases on a woman’s psyche, until just a few decades ago the medical community rejected the idea that a person’s immune system could attack their own body. As a result, the research funds devoted to these illnesses are also inadequate. As many as 50 million Americans are affected by autoimmune diseases—similar to the number of Americans diagnosed with heart disease and cancer combined—but the National Institutes of Health research fund dedicated to studying autoimmune diseases is only one-sixth that of cancer research. Though common diseases with high mortality rates should clearly be a priority, “women have higher rates of debilitating but not life-threatening chronic diseases,” Dusenbery notes. Consequently, the disparity in funding contributes to “women’s lower mortality but higher morbidity,” known as the “gender paradox” in medicine.

The knowledge gap stems from the tendency of medical researchers to exclude women as research subjects, often for self-contradictory reasons. On the one hand, they argue that there is no difference in men’s and women’s bodies, so research done on men should apply equally well to women; on the other hand, they insist that there is such a big difference that including women would “destroy the homogeneity of the study population.” This has resulted in absurd scenarios, like studies on how obesity affects breast and uterine cancer without a single female subject.

The exclusion of female subjects doesn’t end with human trials. The cells and mice used in lab experiments tend to be all male. Even when representatives of both sexes are used in experiments, the results are often not analyzed separately by sex.

This bias can be deadly. Women are more likely to have “atypical” symptoms of heart disease, that do not involve the crushing chest pain or shooting pain down the left arm typical of male patients. Similarly, the benefits of aspirin are famously male-centric. It’s a widely accepted fact that taking aspirin lowers the risk of a heart attack—but recent studies show that it has no effect on women.

The “trust gap” compounds this lack of sex-specific knowledge. Health care providers do not trust the accounts of female patients, leading to delayed or incorrect diagnoses. Women’s pain has historically been described as hysteria—all in the woman’s head. Even now, when pain is not easily diagnosable, doctors tend to assume female patients are suffering from a mental problem. This eventually forces the patients to take medication such as anti-depressant unnecessarily, or to find another doctor who will take them—and their pain—seriously.

Dusenbery says that she wants her book to be the wake-up call for her fellow millennial women. As a member of that class myself, I second her motion. After reading her book, I became fearful about my fate within the healthcare system. And as a scientist, I find the neglect of sex-specific analysis in medical research exceptionally puzzling. As Dusenbery puts it, “the point of requiring women to be represented in clinical research is not to include them just for the hell of it but to increase scientific knowledge by finding out whether there are or, just as importantly, are not any differences between men and women.”

Factors other than one’s sex play added roles in this biased system, Dusenberry notes. “Fat women report that any ailment is blamed on their weight; trans women find that all their symptoms are attributed to hormone therapy; black women are stereotyped as addicts looking for prescription drugs,” she writes. Throughout the book, Dusenbery articulates how these additional factors compound the gender bias.

If at times the stories Dusenbery shares are a little repetitive, this just shows how prevalent they are.

I would recommend this book to everyone, especially those in the medical industry. According to a 2016 Gallup survey, only 39 percent of Americans showed confidence in the healthcare system. The low confidence rate could be blamed on many factors, but this book shows that at least a part of the blame might go to the health care providers themselves. Systemic bias—be it purposeful or unconscious—can adversely affect the health of the whole population. Losing the trust of the patients can have bigger impacts beyond physician-patient relationships, such as increasing the likelihood of epidemics, or hindering medical innovation. Maybe this book can help some healthcare providers take the first step towards rebuilding patients’ trust.

Youngah (Karen) Kwon is a Ph.D. candidate in the Department of Chemistry at Columbia University. When she’s not in the lab chasing after conjugated polymer single-molecules, she can be found glued to her laptop writing about science and the culture surrounding it.