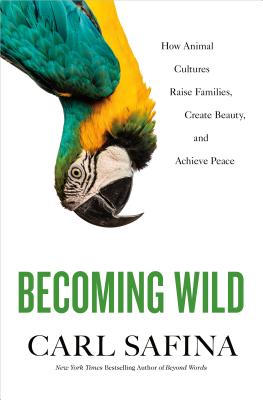 Humans usually consider themselves the culmination of evolution, the most marvelous creatures on the planet. We even tend to differentiate ourselves from the rest of the animal kingdom: there they are, here we are. But science shows again and again that the dividing line between humans and animals is far blurrier than we initially thought.

Culture is usually cited as a main characteristic that differentiates us from the rest of living beings ―what we learn and share is often crucial to us. For some years now, however, we know that we are not the only ones who can create and, most importantly, depend on culture for survival.

In Becoming Wild: How Animal Cultures Raise Families, Create Beauty, and Achieve Peace, ecologist and author Carl Safina switches skillfully between detailed research and captivating anecdote to explain the cultures of all sort of animals ―humans included. “Culture is information and behavior that flows socially and can be learned, retained, and shared,” Safina writes. Joining field researchers across the globe, Safina acts as an acute observer, teacher, tour guide and conservationist, examining the capacity of sperm whales, scarlet macaws and chimpanzees to learn from other individuals in their social groups. While doing so, he forces us to ask ourselves: are humans truly special, or no better than other animals?

“How does a whale find meaning in life?” Pushing philosophy to a new realm, Safina uses this question to jump into an immersive journey seeking encounters with the “archetypical whale of human imagination”: the sperm whale (like Moby Dick, made famous by the Herman Melville novel). Joining behavioral ecologist Shane Gero in the waters of the Eastern Caribbean, Safina comes to know the whales as different individuals, as brothers and sisters, as mothers and babysitters, and as a community of families, each with their own way of doing things.

Like globalization pioneers, sperm whales have “the only known cultural groupings that exist at a transoceanic scale.” Whales that belong to different communities or clans have different food habits and travel different routes. They recognize each other by specific vocalizations equivalent to human names, which reveal their individual identity, family and clan. In this way, when their nomadic movements overlap in the sea, individuals who belong to the same clan socialize –even when they have never met before.

Switching from water to air, Safina takes us deep into the Peruvian rainforest to continue his exploration of animal culture with a drastically different species: the scarlet macaws. These birds are very large long-tailed parrots native to Central and South America. As their name suggests, the scarlet macaws are mainly red but, as Safina quickly points out, the striking vibrant combinations of red, yellow, green, and blue make them impossibly beautiful.

“Why could such profligate colors exist?” Safina asks. Joining researchers Don Brightsmith and Gaby Vigo, the author tries to answer this question. We learn that young birds learn much by observing their parents, but that parrots ―with their exceptionally long life-span― need to learn more than most. Nestlings not only develop unique calls learned from their parents, and dialects to reinforce group identity, they also learn the standard of beauty by which they choose mates. As plumage, displays and vocalizations diversify, mating preferences also evolve and diversify among species. Without necessarily being a proxy for health or advantageous genes, beauty emerges as a superb but vain arbitrary preference. “Beauty –for the sake of beauty alone– is a powerful, fundamental, evolutionary force,” Safina concludes.

Shifting back to the world of mammals, Safina joins primatologist Cat Hoibater in the Budongo Forest of Uganda to observe wild chimpanzees. Ironically, this final section, named Peace, starts with chimpanzee violence.

Chimpanzees are widely known because of their group-to-group cultural variations in tool-use and grooming. Differences among social groups are easy to spot on almost a day to day basis. So is the males’ obsession with status. Hierarchy is the preoccupation in the life of chimps, and Safina asserts that these dramas “don’t just waste everyone’s time; they waste the potential for better-quality time.” Safina sees brutal aggression even among members of the same group and argues that this is a trait present only in chimpanzees and humans.

As a primate researcher, I know how hard it can be to put aside our human prejudice when observing animals that look and behave a lot like us. Trying to overcome this conflict, Safina starts wondering how chimpanzees hold their communities intact in the face of such violent male ambition. Slowly, he learns that chimps have “a preference for peace, within a penchant for war.” Social difficulties are inevitable. Safina not only describes fights but also instances of reconciliation, sometimes even aided by a third individual who breaks up a fight, calming the situation. Mostly anecdotal, such interventions by bystanders are rare among non-humans but, as Safina points out, they are not universal among humans, either. Leaving behind his first impressions, Safina sees that a huge part of chimpanzee life is learning how to make peace through forgiveness and reconciliation, in ways that are characteristic to each community. That is also a form of culture.

Why do animals need culture? Many animals need to learn, from others in their social group, the answer to the question “how do we live here?” Oceans and lands across the world are being flooded with chemicals and trash. Habitat loss and fragmentation, overexploitation of biological resources, pollution, species invasions and climate change are wiping out mammals, birds and amphibians at a rate comparable to previous mass extinctions. Humans ―rather than a giant meteorite― are behind this colossal destruction of diversity. The goal of Becoming Wild is not only to document how cultural learning works, but to show why it matters and how we can preserve it through better conservation efforts. Cultural variations are not only fascinating, but vital to survival. If there’s nobody around to teach youngsters, cultural knowledge dies out ―and, with it, the possibility of species survival and perpetuation.

We live in an anthropocentric society, in which the human being is not only the center of everything, but also the measure. This has caused us to look down upon the rest of the animal kingdom throughout centuries. Safina enables us not just to see animal culture, but to push beyond labels and feel the animals being themselves, living with their families, sharing communities and the habitats where our worlds meet.

Other animals are the best they can be. Safina forces us to take a hard look into the mirror and ask: “Are we?”

Sofia Landi is a postdoctoral associate in systems neuroscience at The Rockefeller University, where she studies the neurobiology of facial recognition in macaque monkeys.