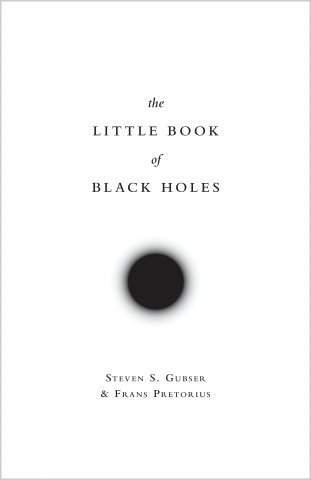 The Little Book of Black Holes

In 2015, the LIGO observatory detected a “chirp.” This measurement signaled the first detection of gravitational waves–ripples in the fabric of spacetime–created by the collision of two black holes. The event released more power than that of all the stars in the universe combined, but the signal that reached us 1.3 billion years later was very faint, and could be felt only by the incredibly sensitive 4-kilometer-long LIGO detector. This L-shaped apparatus can detect one of its arms stretching by as little as one-thousandth the size of a proton. Conceived in the late 1960s, LIGO led to the 2017 Nobel prize in physics for American scientists Rainer Weiss, Barry Barish and Kip Thorne. Its first observation of gravitational waves came exactly 100 years after Albert Einstein predicted that they exist, and opened up a more direct way to learn about black holes.

Just in time for this new age in black hole astronomy, Princeton physicists Steven Gubser (author of The Little Book of String Theory) and Frans Pretorius have come out with The Little Book of Black Holes, which takes us on a mind-blowing ride inside these mysterious objects. In this demanding but rewarding tour, they bring along two fictional experimenters, Alice and Bob (stock characters in many physics thought experiments), who make the subject accessible to any reader familiar with basic concepts in physics. The “little book” is dense with information but light to read — or as light as the subject can be. Gubser and Pretorius start by introducing readers to special relativity’s strange warping of time and space with the example of Alice running with a 6-meter pole at 87% the speed of light in a particularly energetic pole-vault. Bob, watching from the bleachers, sees the pole as being only three meters long.

The authors then go on to general relativity, which expands on the ideas of special relativity by including the effects of gravity. They highlight its curious consequences: for example, our heads age faster than our feet, because our feet are closer to a heavy object (the Earth).

Having primed us in the basics of relativity, Gubser and Pretorius finally introduce us to black holes, describing both stationary and rotating black holes, their presence in the universe, their collisions, and their thermodynamics.

There are few equations in the book. One notable exception is Einstein’s equations, which describe general relativity. Based on these equations, scientists predicted black holes, but until the astronomical observations of the ‘60s and ‘70s, many scientists were skeptical that they actually exist.

Indeed, some of the properties of black holes are beyond our imagination. A black hole the size of an apple has a mass five times that of the Earth. Once past the boundary of the black hole (the “event horizon”) nothing can escape, not even light. “Poetically we might think of a black hole horizon as the lip of a waterfall, beyond which spacetime cascades ineluctably downward into a singularity that destroys all things,” Gubser and Pretorius write. Tidal forces inside a black hole strip matter down to its simplest constituents. Inside the horizon, time becomes space. Einstein’s equations even suggest that spinning black holes contain a time-machine: if you travel around a ring inside a region of the black hole, when you are back to the original position you are back at the same time you started at, or arriving even before you left. These well-presented and astonishing facts make the reading experience compelling to physicists and Interstellar fans alike.

Though mind-bending, black holes are actually simple objects. The “no-hair theorem” says that they do not have complicated details (“hair”), making them great theoretical laboratories for thought experiments to test our understanding of general relativity, quantum mechanics, and how to merge the two. Black holes challenge our understanding of space and time, but the authors refrain from going into the philosophy and history of these concepts. They also refrain from more speculative musings, such as where matter goes when it is swallowed by a black hole. Some scientists conjecture that the matter appears in another universe, while others claim that it continues to fall for an almost infinite amount of time before rebounding out in a “white hole.”

Before the detection of gravitational waves in 2015, scientists inferred the presence of black holes from their influence on the motion of matter around them (and, of course, from a long chain of theoretical arguments). The motion of the stars suggests that there are “supermassive” black holes a few billion times heavier than our Sun at the centers of all large galaxies like our Milky Way. The origin of these black holes, Gubser and Pretorius note, is still unknown. This and other puzzling facts reported in the book show how much we still have to learn about these mysterious objects.

The authors then discuss the more advanced topic of black hole “thermodynamics.” It turns out that black holes are not completely black: they may suck in all of the light and matter around them, but they also emit a type of quantum mechanical radiation, called Hawking radiation. They also display more “entropy”–or degree of disorder–than any ordinary form of matter. Albeit not strictly necessary, having previous familiarity with the basics of entropy and quantum mechanics helps readers appreciate this section. Gubser and Pretorius finish the book with a letter to Einstein describing the latest scientific discoveries. It concludes: “a lot of Princeton professors don’t wear ties to work anymore, but most of us do wear socks. Lake Carnegie is as beautiful as ever … We haven’t figured out a unified field theory yet, but we’re still trying. The best is yet to come.”

This last sentence has a special meaning because, although just published, The Little Book of Black Holes is already behind the progress of science. The observation of two neutron stars colliding, wished for in the book, happened on August 17, 2017. Astronomers measured both gravitational waves and electromagnetic waves coming from the collision. As Gubser and Pretorius forecasted, we have now entered a new age in astronomy: light waves let us see the cosmos. Gravitational waves let us “hear” it.

Enrico Fonda is a postdoctoral researcher in Physics at New York University, where he studies classical and quantum fluids.