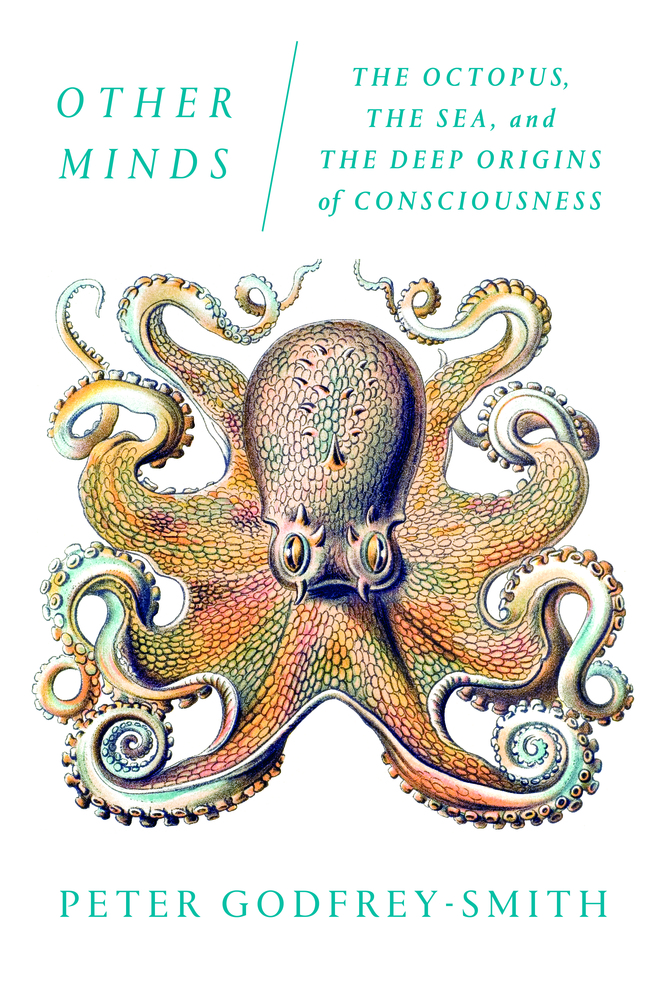 The Octopus, the Sea, and the Deep Origins of Consciousness

In a political era characterized by echo chambers, it’s refreshing to expand our sympathies to minds radically different from our own. The minds of, say, octopuses.

In Other Minds: The Octopus, the Sea, and the Deep Origins of Consciousness, philosopher and octopus enthusiast Peter Godfrey-Smith pulls on his scuba gear and dives into an investigation of consciousness — by “meeting an intelligent alien” that lives in the ocean.

Cephalopods, including the octopus, cuttlefish, and squid, have large nervous systems and exhibit complex behaviors. Evolutionarily speaking, their mental sophistication might seem surprising — the last common ancestor among cephalopods, humans, and other vertebrates lived 600 million years ago and may have resembled a worm. This ancient branching point on the evolutionary tree means that intelligence developed independently for mammals on land and cephalopods in the sea. “Evolution built minds twice over,” writes Godfrey-Smith, who traces the history of these gelatinous animals en route to an ambitious goal: to “work out the evolutionary origins of subjective experience.”

Godfrey-Smith is uniquely suited – wet-suited, that is – to undertake this project, in which “a rubber-encased mammal and a color-changing cephalopod find themselves staring at each other in the Pacific Ocean.” A professor at the City University of New York’s Graduate Center and at the University of Sydney, Godfrey-Smith works on philosophy of biology and philosophy of mind. His book is a delightful and idiosyncratic blend of natural history, philosophy, and neuroscience, whose prose glides seamlessly from one field to the next. Godfrey-Smith has been observing octopuses and cuttlefish off the coast of Sydney for several years. He is at his best when describing these close-range, sometimes intimate interactions: “Occasionally, when I’ve been very close, a giant cuttlefish has reached an arm out, just a few inches, so it touches mine. It’s usually one touch, then no more.”

Godfrey-Smith makes the case that octopuses are “sentient,” meaning they have some basic subjective experiences, like pain, but stops short of saying they are “conscious.” As a neuroscientist studying perception and awareness, I would typically call any subjective experience “conscious.” But Godfrey-Smith seems to be seeking a middle ground between human-like “consciousness” and total “unconsciousness” to describe the experiences of some animals. He argues that responses to pain in animals from chickens to crabs to octopuses “are too flexible to be dismissed as reflexes.” Injured fish, for example, will swim into a tank with dissolved painkiller, suggesting that the injury actually feels bad to the fish—that they are, in other words, “sentient.”

Is octopus sentience special? Godfrey-Smith doesn’t really say what elevates an octopus’s experience above those of fish and crabs. Do octopuses have what scientists and philosophers call “phenomenal consciousness,” such as immediate sensory experiences? What about “access consciousness,” when those experiences are remembered, reasoned about, and acted upon? Such distinctions matter if we want to understand how an octopus’s experience might illuminate our own.

It is instead with stories – no doubt more riveting than taxonomies – that Godfrey-Smith helps us get to know the cephalopod and compels us to consider its particular (and particularly mischievous) mind. Octopuses short-circuit aquarium power supplies by squirting water at light bulbs, blast the back of lab technicians’ necks with water, and ruin experiments by destroying the lever they were supposed to learn to pull for food. They plug the outflow valves of their tanks with the tips of their arms, flooding labs. One researcher fed an octopus a piece of squid – not a choice food for an octopus – and when she returned, the octopus had not eaten the squid but “made its way slowly across the tank to the outflow pipe, watching her all the way. When it reached the outflow pipe, still watching her, it dumped the scrap of squid down the drain.” The apparent cleverness, social awareness, and even mean-spiritedness of octopuses in these stories do seem more human than crab.

But octopuses are profoundly unlike humans in other ways. An octopus’s 500 million neurons – a number that falls between those of pigeons and of cats – are not concentrated in the brain but spread throughout the body, with about twice as many neurons in the arms as in the brain, making the octopus “suffused with nervousness.” These arms, which have a sense of touch as well as a chemical sense, analogous to taste or smell, are rather independent from the brain. As Godfrey-Smith says, “there is a conductor, the central brain. But the players it conducts are jazz players, inclined to improvisation, who will only accept so much direction.”

To explain the unusual cephalopod nervous system and the complexity of octopus behavior, Godfrey-Smith can’t rely on the usual evolutionary reasoning that intelligence evolves in complex social environments. Despite their occasional interest in humans in scuba gear, “octopuses are not very social,” roaming the sea floor more or less alone.

Godfrey-Smith suggests instead that the octopus’s large nervous system began to emerge when ancient cephalopods lost their shells. Afterward, the creatures required a big brain for two reasons. First, a big brain helped them hunt from a position of physical vulnerability: cornering pray is more difficult when one must also evade predators. The second reason, though, was more unique to cephalopods. Cephalopods needed big brains, Godfrey-Smith argues, to coordinate the movements of a complicated and newly unconstrained body.

“The body itself is protean, all possibility,” Godfrey-Smith writes. “The same animal can stand tall on its arms, squeeze through a hole little bigger than its eye, become a streamlined missile, or fold itself to fit in a jar.” Godfrey-Smith challenges us to imagine what it is like to be this protean jazz ensemble, to empathize our way out of a meaty human brain floating in a dark, closed skull and into a brainy octopus body floating in a dark, open sea.

As much as I enjoyed the seamless slides from philosophy to science and back in Other Minds, I sometimes felt murky about where the science began and ended. I wondered which evolutionary explanations were established in the scientific literature and which came directly from Godfrey-Smith. Evolutionary stories always risk entering the terrain of “just-so stories,” post-hoc evolutionary explanations without much empirical support. Godfrey-Smith’s footing was also less sure when he left the undersea world of the octopus to try to explain a more human kind of consciousness. He may have tried to explain too much in a single book, leaving some sections feeling more like intriguing but surface-level contemplations than worked-out arguments.

Throughout, though, I appreciated the impulse to look far away from ourselves to understand aspects of the mind that we often think of as distinctly human. If a human and a cephalopod can have a meeting of minds at the bottom of the ocean, can’t we humans have the same here on land? The echo chamber is opening up already.

Rachel Denison is a Postdoctoral Fellow in the Department of Psychology and Center for Neural Science at New York University, where she studies human perception.