What It Means To Live With Dementia 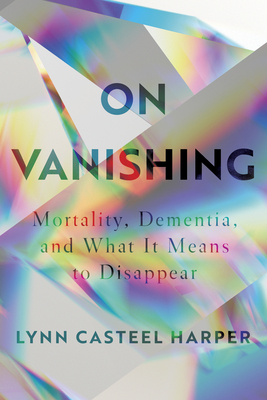 Mortality, Dementia, and What it Means to Disappear

America’s coronavirus tragedy is, to a great extent, a nursing home tragedy. When the New York Times updated its tracking data on August 13th, fully 41 percent of the country’s COVID-19 deaths – 68,000 lost lives – were connected to nursing homes. In an attempt to contain the disaster, nursing homes have banned visits from family and friends since mid-March and limited the movement of residents around their facilities, leading to widespread declines in nursing home residents’ health, mood, and cognition. This concentrated tragedy has stimulated a wave of important, overdue reporting on the nursing home industry, including exposés on its murky, private equity-engineered finances and the too-common practice of evicting poor residents covered by Medicaid. But these stories often fail to tell their readers much about the day-to-day experience of nursing home life, either before the pandemic or during it.

Lynn Casteel Harper’s On Vanishing holds the promise of filling that void. Harper’s main subject is dementia, which affects 50.4 percent of nursing home residents. When we read about a woman dying alone in a locked-down nursing home, we should more often than not picture her with dementia.

Harper spent seven years as a nursing home chaplain, and her heartfelt meditation is at its best when describing life for that 50.4 percent, through tenderly observed and crisply written vignettes. People with dementia, Harper writes, remain “complex, dynamic individuals” whose condition entails not just “diminishment” but “ascendency,” and whom we should engage with respect and, above all, patience: “if you wait long enough” with a dementia patient, she writes, “something always comes.”

Harper tells us about Clara, a retired singer who reaches up from her wheelchair to passersby, gently touching the face of anyone who stops. About Evelyn, a ninety-five-year-old whose family tacked a biographic sketch outside her room, and who cries when Harper reads it aloud. And about her own grandfather, a World War II pilot and retired doctor who, during her tearful final visits, reacts to neither the M&Ms she brings him, nor the music she plays him, nor her tears themselves.

These compelling stories compete with – and often lose to – a more abstract subject: the words we use to describe dementia; why we use those words; and how they affect people with dementia, their caregivers, and the cultural and political environments that shape their care. Starting from Susan Sontag’s observation in Illness as Metaphor that 1970s cancer patients suffered in part from their disease’s “‘very reputation,'” Harper devotes the majority of her book to a critique of the metaphors that “besiege persons with dementia” and “generate and reinforce stigma” against them.

Harper focuses on two dementia metaphors in particular: vacancy and darkness. (She has in mind clichés like “the light’s on but nobody’s home” and watching “the lights go out” in a mind). Over sixty meandering pages (four to describe how dawn is both light and dark; six on how dusk is, too), Harper concludes that dementia leaves people more “mad” than vacant (a poignant comparison to brain-dead patients drives this point home), and that darkness isn’t so bad anyway. Fair enough. But Harper fails to explain how exactly these metaphors affect the stark realities of life for people with dementia. With that connection left obscure, her focus on our figurative lexicon feels out of place in her otherwise harder-headed book.

Even when she sticks to describing dementia itself, Harper often fails to capture the harshness of its reality. My father has lived in nursing homes for the past year, and Harper’s account reads as a thoroughly airbrushed picture of his world.

Harper tells us that the nursing assistants who tend to dementia patients suffer workplace injuries at “three and a half times the national average,” but she doesn’t describe the grunting, straining, painful, precarious process of transferring a patient from bed to a wheelchair.

She lists every building at the nursing home complex where she worked, but fails to describe how the smells of disinfectant, urine, feces, and bacteria digesting dead skin mingle in those buildings. She tells us about residents’ beautiful moments in her once-weekly prayer group, but not about the panic and boredom of their lonely nights.

She complains that nursing homes are too medicalized, but fails to describe the complex pharmaceutical regimens that keep the elderly out of the hospital, or how aged bones snap in a fall, or what they look like poking through the semi-coagulated blood of a bedsore.

This charmed, bloodless outlook eventually leads Harper to argue (with help from Foucault and Emerson) that our fear of dementia grows from a reverence for market efficiency and “white, upwardly mobile social norms.” After all, she claims, dementia isn’t so different from normal cognition, because all perception is an illusion anyway. In passages like these, Harper seems to forget that people with dementia are, in fact, sick: that dementia is a matter of failing flesh, not insensitive metaphors, and that caring for the sick is a practical and emotional challenge in any society, whatever its opinion on market efficiency.

But maybe this selective blindness is On Vanishing’s greatest strength. In her roles as chaplain and granddaughter, but not nurse, nursing assistant, therapist, doctor, researcher, daughter, wife, or patient, Harper has spent years engaging dementia sufferers’ minds at their best, without fully engaging the tragedy of their failing bodies at their worst. From that skewed vantage, Harper argues that we should meet dementia sufferers where they are. The caregivers whose labors keep people with dementia clean, safe, and healthy might rightly answer: ‘where they are’ is dying, and meeting them there would mean death.

And yet, for all that, there are moments when no physical need is pressing – the tender moments of Harper’s vignettes, in which it is possible to meet someone with dementia where she is. On Vanishing shows the joy and care – the life – that’s possible in those moments, as long as there’s someone around with the time, patience, and empathy to share them.

Stephen Serene is a Ph.D. student at the Rockefeller University, where he studies the neurobiology of facial recognition.